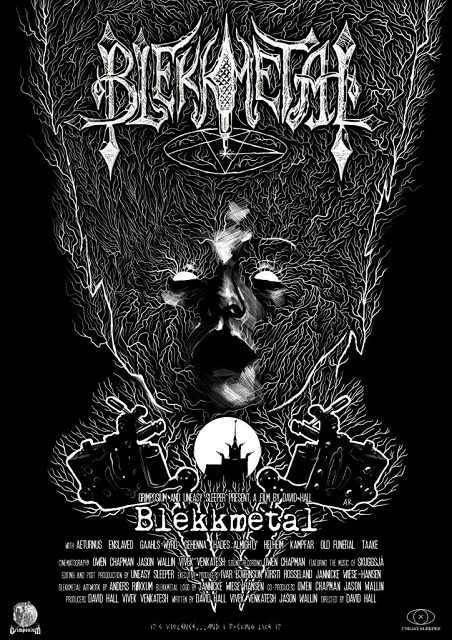 Making a documentary about black metal isn’t exactly a novel concept in 2016, as an ever-increasing number have been created since hipsters became interested in the sub-genre towards the end of the ‘00s. What differentiates Blekkmetal from other examinations of black metal, however, is its absolute authenticity: this film chronicles the Blekk Metal festival that took place in Bergen, Norway in November, 2015, a concert that celebrated black metal’s second wave during the early-‘90s and featured some of its earliest progenitors playing sets filled with moments that, literally, birthed the sub-genre (witness: Enslaved’s fantastic take on “Heimdallr”, among so many others).  And, let’s be clear, producers Vivek Venkatesh (associate professor, and former associate dean, at Concordia University – full disclosure: we co-authored a journal article on black metal in 2013) and David Hall (filmmaker and owner of the Handshake Inc. label) are no hipsters, as each has devoted much of their personal and professional time to black metal as fans, academics and now documentarians. Black metal’s obsession with the ‘true’ is no doubt reflected here.

Far from being a mere concert film, Blekkmetal sets its stage by detailing the city of Bergen as well as black metal’s sub-culture, all the while interspersing its interviews with performances from the Blekk Metal festival.  Throughout the course of the documentary, we are exposed to the linkages between Bergen and black metal (“Bergen is too small to be a real city, but too big to be a village,” says Enslaved guitar player and Blekkmetal executive producer Ivar Bjørnson); the role of body art and tattoos in the black metal scene; classic black metal rehearsal footage from the late ‘80s;  discussion of black metal’s initial appearance in the metal scene courtesy of Osmose Productions founder Hervé Herbaut; and, declarations of black metal’s lasting impact from Blekk Metal festival co-organizers Jannicke Weise-Hansen and Kirsti Rosseland (“When the [Norwegian black metal] scene started, people had no idea… they wanted to make something great for themselves, but they wanted to keep its sub-culture and they had no idea about the explosive scene that was to come”).

Blekkmetal’s importance as an archive of the (apparently one-off) Blekk Metal festival is clear, as is the impact of tracing black metal’s initial roots and covering several obscure elements not considered in other film-based discussions of Norwegian black metal. The filmmakers’ passion for this music and for Bergen is beyond reproach, and the authenticity of their purpose presents interesting lenses with which to view this topic. David Hall’s trademark stylized footage is appreciated as well, as it adds additional visual flair to an already unique landscape. In the (frozen) sea of recent examinations of black metal, Blekkmetal – much like especially well-conceived corpse-paint – stands out boldly.