MEGADETH – The Sick, The Dying…And The Dead! 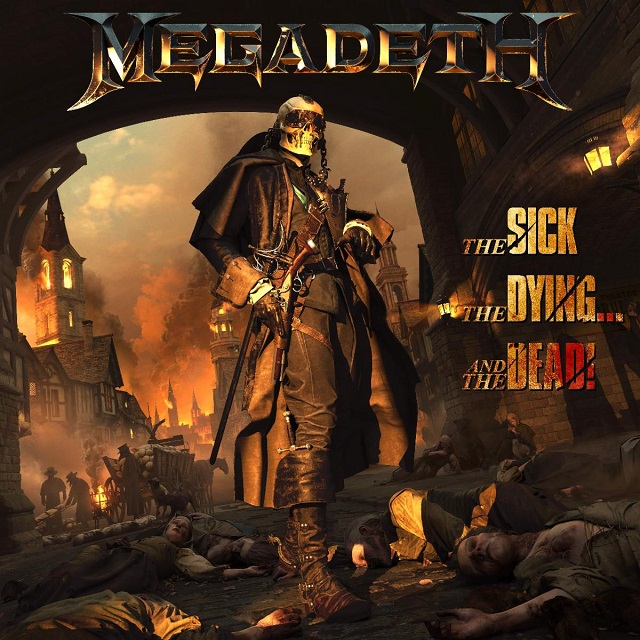 While “deth” is in the name, Dave Mustaine and his band of mercenaries are anything but dead. Battling medical problems, lineup changes, and other assorted issues, Megadeth are back in full force with The Sick, The Dying…And The Dead! With inspired songwriting, machine gun thrashing, creative compositions, sharp transitions, and rapid soloing, Megadeth keeps taking no prisoners almost 40 years into their career.

The stand out musician is Dirk Verbeuren – Mustaine knew what he was doing bringing the former Soilwork sticksman into the fold. His drumming pops with precision technicality, brief, but effective extremity, and breathtaking speed. Backed by a professional, sturdy performance by Testament’s Stevie Di Giorgio on bass (love that bass riff on “Night Stalkers”), Mustaine and Kiko Loureiro display ferocious leads and riffs that Megadeth has been known for since their inception. Mustaine also sounds surprisingly strong vocally – a bit fatigued in some areas (the performance on the promising “Sacrifice” misses the mark) – but overall couldn’t ask for better considering his age and conquering throat cancer.

Highlights include the eerie, ominous title track with memorable soloing towards the latter part of the cut which immediately segues into the comforting assault of “Life In Hell”. This is Megadeth in their pocket here, doing what they do best with fast tempos, meaty riffs and angry vocals. Single “Night Stalkers” shows impeccable transitions and even though the Ice-T cameo is misplaced, the “game over bitches” line is unintentionally hilarious. “Dogs Of Chernobyl” features well-written lyrics about the horrors of nuclear radiation which holds a smoldering, mid-tempo viciousness that erupts to a thrashing end complete with flawless soloing.

The above tracks are the first four and the middle cuts (not including the two bonus tracks) lag a bit with the standard riffing of “Junkie” and the awkward segue of short instrumental “Psychopathy” into “Killing Time” – which sounds like an outtake from the United Abominations era. Single “Solider On!” came off a bit ordinary with rudimentary rhythms and Mustaine dominating with his vocals, but is better in the context of the album.

“Célebutante” is bound to go down as the sleeper gem as it bleeds Mustaine’s NWOBHM influences. Love the gnarly, menacing riff in the mid-section of this song. “Mission To Mars” is also a fun, goofy romp lyrically; it’s hard not to chuckle at the lyrics, especially the chorus line “I hang with the man on the moon, I’ll be there soon.”

“We’ll Be Back” is the closer and triumphantly states the mission of MegaDave and crew. The bonus cover tracks of Dead Kennedys’ “Police Truck” and Sammy Hager’s (with the man himself on as a guest) “This Planet’s On Fire” are energetic and make for enjoyable listens.

The Sick, The Dying…And The Dead! doesn’t match the explosiveness of 2016’s Dystopia, but is miles better than the slog of Th1rt3en and the careless, insipid Super Collider. Now rattle your God damn head!