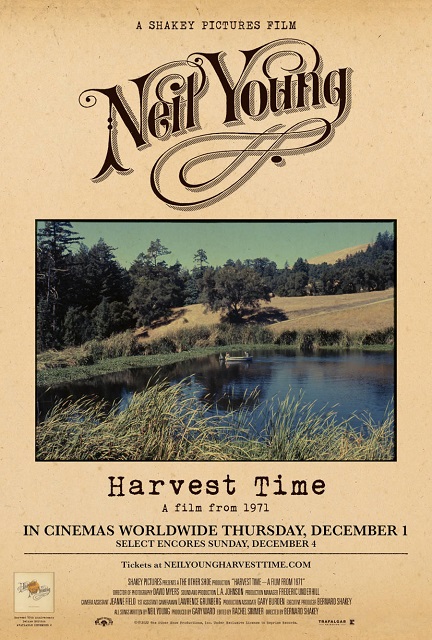 For years (heck, make that decades), Neil Young fans were patiently waiting for ‘the Godfather of Grunge’ to finally make good on his promise of opening up his vast archive of classic recordings. And thus far, the results have been extraordinary (Live at the Fillmore East, Live at Massey Hall 1971, Hitchhiker, Tuscaloosa, Homegrown, etc.). But most admirers probably weren’t aware that ol’ Neil’s archive also included film footage…and especially, a bloody 2-hour long film chronicling the creation and recording of his most commercially successful album, Harvest. 50 years after the album’s release comes Harvest Time, a true fly-on-the-wall visual document of Neil circa 1971. In other words, it’s not a traditional documentary with narration throughout, explaining the where’s, why’s, and how’s. But that said, the footage is priceless – which makes for some truly fascinating and surprising (since few knew this much footage existed) viewing. And while the material on Harvest is thought to be of the folkie variety (especially such classics as “Heart Of Gold,” “Old Man,” and the title track), there were also several tunes that recalled the more amp-cracklin’, raw rock of his work with Crazy Horse (namely, “Alabama” and “Words”).

The majority of the footage was shot at Neil’s Broken Arrow Ranch in Redwood City, California, where we spot Neil and his newly-assembled backing band, the Stray Gators (comprised mostly of Nashville studio musicians) rocking in a barn renovated into a rehearsal space. But quite a bit of the footage (directed by Neil) is featured from other locations, including scenes of Stephen Stills and David Crosby recording backing vocals for ‘Alabama’ and Graham Nash and Stephen Stills recording backing vocals for ‘Words’ (in two separate sessions at a NYC studio). Also, we travel overseas to see the London Symphony Orchestra recording their bit for “A Man Needs A Maid.” And this scene may very well present a whole new appreciation for the tune, as I (and I’m sure quite a few others) was not aware that Neil was actually in the same room as the full symphony, playing piano and singing the song at the same time! In other words, it was the antithesis of nowadays when artists construct a tune track by track/instrument by instrument.

Admittedly, not all of Harvest Time is riveting viewing, such as a nameless three/four note riff that is jammed on over…and over…and over starting around the film’s 40 minute mark. But the brilliant most definitely outweighs the blah. Case in point, such other highlights as a Neil radio interview with DJ Scott Shannon in Nashville, footage of Neil being affectionate with his then-girlfriend/actress Carrie Snodgress, discovering that Neil circa ‘71 had ‘heard of’ Pink Floyd but was not familiar with their music and that he thought of himself as a ‘rich hippie,’ plus, a rendition of a tune that would not appear on the Harvest album, Journey Through the Past. Closing things out is an outstanding one-man acoustic/harmonica/voice version of ‘Heart of Gold,’ as well as meeting the chap that “Old Man” was about (the caretaker of Neil’s ranch, Louis Avila), plus footage of Neil performing the tune on a concert stage from that era. The late Ben Keith (Neil’s long-time pedal steel player) describes his friend as a ‘hellacious talent’ at one point. And for two hours, Harvest Time most definitely supports this claim.