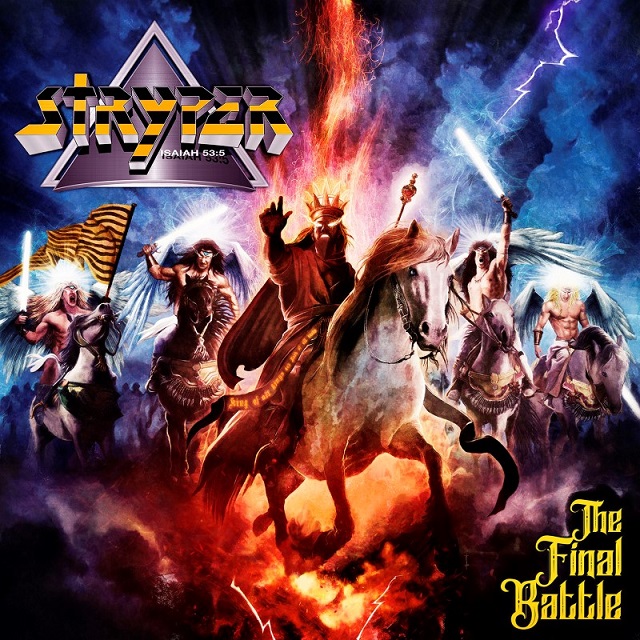 30 plus years after the yellow and black attack said "to hell with the devil", now it’s time for The Final Battle. Or is it? Fifth album of new songs (not counting one of re-recordings, and covers) since 2013. Yes, (cue eye roll), Stryper has new music, like many of the metal bands from the ‘80s. Michael Sweet and brother Robert on drums, with Oz Fox still at the core, joined by Perry Richardson on bass. While new Stryper is what you know from the ‘80s; it’s not the same old same old either.

Listen to the majority of the singles released from the last few albums No More Hell To Pay, Fallen, God Damn Evil, and Even The Devil Believes. The heavy riffs, melodic twin harmonies, solo tradeoffs, big hooks, and vocals are still intact, but several songs on each album are begun or carried by drums ("Ashes To Ashes"), and or chugging riffs. Let me explain.

"Transgressor" fades in and kicks off the album like "Soldiers Under Command" but faster, hard and heavy with attacking riffs, twin solo tradeoff, and Sweet getting a couple screams. "See No Evil Hear No Evil" a slower song so early follows, but no less hard hitting with those big backing vocals. Guitar tone on the "Same Old Story" riff sounds more contemporary but the verses and chorus are all familiar. "Heart & Soul" also moves along with one riff and steadfast pace, no twin guitar work, with a nice melodic chorus section. Ballad "Near" sees Sweet delivering a top notch vocal performance and vibrato. Backing vocals on the hook also sounds like it could be sung in a church. Yup, his voice still got it.

"Out, Up & In" a minimalist straight ahead foot tapping rocker. Lyric video single "Rise To The Call" classic Stryper with drums driving the tempo, a solo section that just smokes and love how they kicked up the pace. "The Way, The Truth, The Life" uses both the retro guitar with the more 2000's riff on the verse for another slower pace. "No Rest For The Wicked" riff is dark, could have been on a Grave Digger album.
While the recent five albums do incorporate the needed ingredients to make Stryper music, it isn't a standard ‘80s playbook. Expect something familiar, yet different.