When you bring together names from some well-known acts to form a band…or should I say “supergroup” you gotta deliver the goods. The Dead Daisies’ second album – consisting of Doug Aldrich (Whitesnake, Dio), John Corabi (Mötley Crüe/The Scream), Marco Mendoza (Thin Lizzy/Whitesnake), Brian Tichy (Ozzy Osbourne/Billy Idol), David Lowy (Red Phoenix/Mink) – Make Some Noise does just that and more with standout performances by the players and shows that ‘70s/’80s bluesy, hard rock will never truly go out of style.

Corabi spoke to BraveWords about going back to that good ol’ rock ‘n’ roll:

“That’s what we wanted to do when we were first talking to producers. We got hold of Marti (Frederiksen – Aerosmith, Buckcherry, Def Leppard) and told him we wanted to do a straight-ahead, kick ass, no frills… not a lot of overdubs or bullshit… we want to let the music do the talking. And he said, ‘I’m in, let’s do this!’ Without blowing smoke, I think we did a great job. I’m always amazed though with the band. Even on the last record (2015’s Revolución) – we don’t have a lot of time to record, because geographically we’re all over the world. So the last record; we wrote, recorded, mixed and mastered 17 songs in 32 days. This time, we had even less material when we all got together. We literally wrote, recorded, mixed and mastered 12 songs in 35 days. It’s pretty cool. I dig working with these guys, there’s so much creativity here it’s kind of sick.”

Corabi also shed some light about standout, catchy track “Song And A Prayer”:

“That was a Doug Aldrich riff, he just started jamming it. I had a completely different chorus for it. We all wrote and tracked the music together, but the guys had to leave (Nashville) and get back to LA. So I stayed and worked with Marti (Frederiksen, producer) on a lot of melodies and lyrics; trying to make things better. It’s kind of weird man – it sounds happy, bright and promising; but if you really look at the lyrics, they’re a little dark. It’s a very odd song, but I dig it. And to be honest, I never saw it coming but that’s one of the songs that everybody seems to dig.” 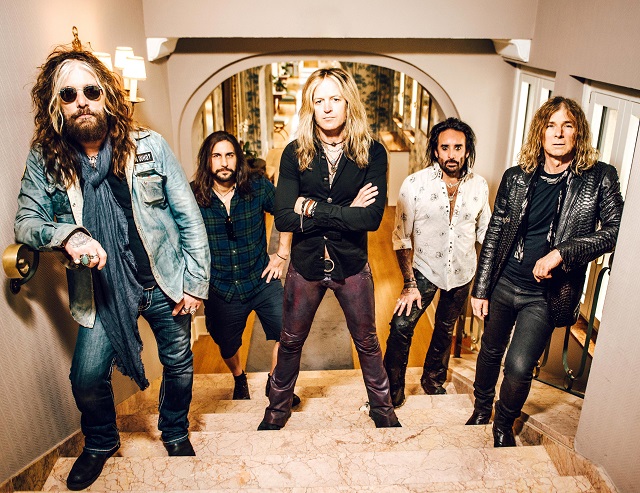