ARKENSTONE – Through The Fire And The Flames 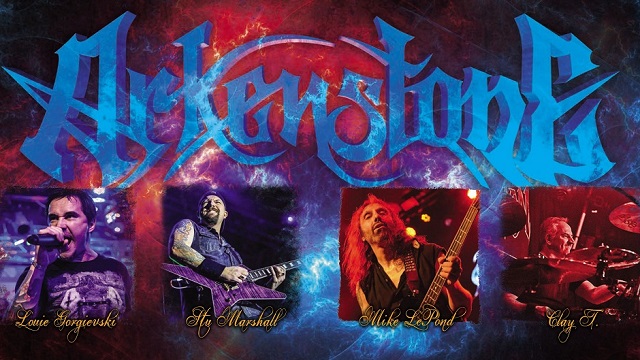 Making the best of out a terrible situation, traditional/doom metal force Arkenstone was forged in Australia by Death Dealer guitarist Stu Marshall. Formed due to the COVID-19 pandemic and lockdowns, Stu went into his well of music and Arkenstone was born with impressive, dynamic singer Louie Gorgievski, Night Legion drummer Clay T, and Symphony X bassist (also Death Dealer bandmate) Mike LePond. Debut EP is out via Steel Cartel Records and showcases four tracks of pure heavy metal. Marshall sat with BraveWords to discuss Arkenstone and its formation, its songs, and the status of his solo project Empires Of Eden.

BraveWords: Tell me about the formation of Arkenstone.

Stu: “It’s a project born out of the COVID lockdown environment. Last year COVID hit the world as you well know, everybody knows, and global touring was shut down. I had written a whole bunch of material for Death Dealer that was very doomy and really dark and evil. It really wasn’t suited for the more power metal style of Death Dealer. So I formed this project with an Australian singer, his name Louie Gorgievski. He’s a fantastic vocalist, very strong timbre, similar to like a Halford, Dickinson kind of vocal. I had worked with him on Empires Of Eden, which was a solo project where I released four CDs about 10 years ago now that had Udo Dirkschneider on it and Ralph Scheepers from Primal Fear. That was a great experience and we had a great friendship build out of that and formed the group from there.”

BraveWords: And you brought in the ever reliable Mike LePond on bass.

Stu: “So working with Mike is a treat. Mike plays bass in Death Dealer and we got to know each other over a couple of shows and he really was the first guy I was thinking of when it came to the Geezer Butler kind of bass style. He’s a massive force. That really elevated the songs, sending him the material with my studio bass playing to get the ideas across and he sends this magnificent piece of art back with his playing. He’s one of the best, a lovely guy.”

BraveWords: It appears this EP is like a taster that is going to build up to a full-length album.

Stu: “We decided to go with an opening EP. I think in this day and age people are flooded with heavy metal and we wanted to put out our four strongest songs on an EP. We put a lot of time into the packaging. The packaging’s super cool. We got some beautiful artwork and we’ve already written the debut album and we’re going through the process right now of recording and refining that for a 2022 release. We’ve also decided to release the EP disc with the full album. So we’re not going to include any of the songs from the EP like some bands do. It’s all going to be fresh material and the debut will be a two disc release, but the cool thing you get with this particular EP release is you also get our label sample disc on there. I think it’s got like 12 tracks with dedicated artwork; pretty cool.”

BraveWords: I was going to mention the artwork – how it portrays a valiant warrior and battle that goes perfectly with the title track.

Stu: “We love the artist. His name is Marc Sasso from New York. He’s worked with Dio and Halford, he’s a good friend of the band – I think he did the first Death Dealer album cover called War Master. We really dig the piece. We think it’s pretty powerful.”

Stu: “It’s funny isn’t it, when you try and explain a project to somebody – it does have all of those elements right? There’s the doom elements, the Candlemass, the Black Sabbath, but it’s also go the highest Helloween sort of – it’s not really happy metal right? I was in a band many years ago called Dungeon. We did some touring here and there and we were lucky enough to spend some time with Megadeth on the road. We were a band that was aggressive power metal and I think that’s what I’ve always wanted to do, is to stay away from the happiest side of stuff and keep it dark, heavy, and in your face.”

BraveWords: Just look at the title “Lord Impaler”. That’s pure heavy metal right there. That’s a standout track as well – talk about that one.

Stu: “Thank you mate! That was directly inspired from latest Dracula film, Dracula Untold. I had the idea for the riff and I sent it to Louie. What happens is when I write music, I usually give it a working title because I write a lot of material and you have to call it something to know when you reference it back, what the hell was that piece called? (laughs) I ended up calling it ‘Lord Impaler’. Some of the singers I work with have every right to change the title; the singer they write the lyrics and the melodies, but what’s happened is those title have remained. ‘Ascension Of The Fallen’ is a title I came up with, ‘Tree Of Witches’ I came up with the title as well. So it’s been nice working with Louis and maybe help inspire him with lyrical direction too.”

BraveWords: “Tree Of Witches” seemed like it was the song that brought the whole project together.

Stu: “Yeah. I had that riff for many years. You know, when you’re driving in your car and you know, listening back to sort of some riffage figuring out what to bring to certain projects – it’s a riff that I’ve heard in the car for the last few years going, man, I’ve got to do something with this because it’s pretty powerful. That was really the first one we came together and wrote for the project and that ended up turning into a band situation.”

BraveWords: Where did the name “Arkenstone” come from?

Stu: “You know, it’s always the hardest thing trying to find a relevant name for a band. If any of your readers out there ever try coming up with a cool name for a band – it really is one of the toughest things of all I think to come up with a not too obvious, but still cool name. I was thinking; it just popped into my head, obviously being a huge Lord Of The Rings fan myself. I did some research and I looked up, you know, and sure there’s always going to be another band out there somewhere in this world that has a similar name and it’s a very difficult thing. And the thing we found was, there’s a lot of inactive bands out there called Arkenstone and I think there’s a punk band. It just seemed to fit the music, the kind of epic, dark songs that we were to bring and it’s a fantastic fit for what we’re doing.”

BraveWords: And the title track is ferocious and in your face. What was the impetus for that?

Stu: “Well, thank you for that. That riff was actually one that I had previously written for a singer called Rob Rock. I worked with Rob in Empires Of Eden. He sang on one of my tracks and I had approached him about doing a solo album for him producing and writing that and that was one of the tracks. And I never heard back from him, but I had a bunch of cool riffs and songs and you’re absolutely right. It was made to be a full throttle fist in your face heavy metal. And (laughs) if you feel exhausted by it at the end, then we’ve done our job!”

BraveWords: Is there anything you’d like to add about the EP or band itself?

Stu: “Yes, certainly. Find us on social media. We’ve got a very special merch pack available at the moment. Sadly, it is for Australia only for the t-shirt because of the horrific shipping costs. It’s like you pay $40 for a t-shirt and $60 for shipping was is just ridiculous. And we don’t want to hurt people with that sort of stuff. If anyone reading this is keen to pick up a shirt, let me know! It is a fantastic looking package. You can preorder the EP from Steel Cartel’s website and we’re super pumped for next year to get the album out.”

BraveWords: You’ve mentioned Empires Of Eden. Is that a thing you’ve thought about reviving at all? Or is it dead?

Stu: “It’s currently dead. It came to an end with my publicist, we had tried to get it signed to some labels and finances were low and we had a few signings over a few releases, but we really felt it reached the end of its life. Four albums in and we were unable to get a proper label release. However, I am planning on releasing a like a one disc of all of my favorite tracks. Not a greatest hits, but my favorite tracks off those four albums and revamping some of the production. That’s a plan in ’22, ’23 to perhaps release that one disc with fresh recordings musically and fresh production to get that out through Steel Cartel.”

Find Arkenstone on Facebook and order the EP at  steelcartel.com.