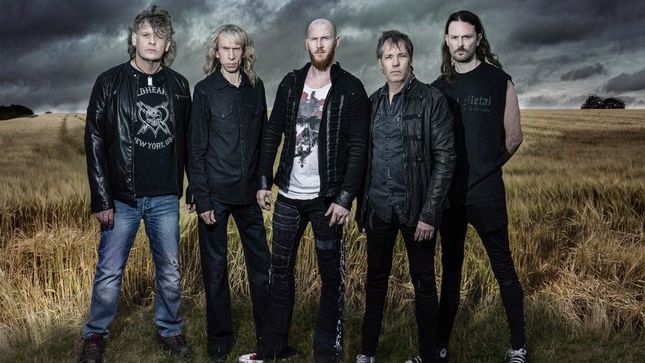 Diamond Head may not be a household name, but their influence on the metal world is undeniable. They don't share the spotlight with the likes of Iron Maiden, Def Leppard or Motörhead, but they are a recognized part of the New Wave Of British Heavy Metal circle that took the distortion-loving world by storm in the '70s and into the '80s. A prime example is Metallica who spent the early part of their career cranking out and covering no less than five Diamond Head songs - "It's Electric", "Helpless", "Am I Evil?", "The Prince" and "Sucking My Love" - taken from the band's debut Lightning To The Nations, an album that turns 40 this year. Listening to Metallica's first three records in particular, the Diamond Head references are easy to find if you've been paying attention.

Commercial success eluded Diamond Head because they were seemingly only able to keep things together for a few albums at a time over the course of four decades. Still, they've managed to put out eight albums and keep their name alive. To celebrate the 40th Anniversary of Lightning To The Nations, founding guitarist Brian Tatler and his bandmates decided album #9 should be a re-recording, figuring the updated version would appeal to the younger generation(s) of metal fans as well as the old guard. Particularly since there has been a renewed interest in Diamond Head in recent years.

"I think that's partly due to our new singer, Ras (Rasmus Bom Andersen), who joined in 2014," Tatler says of the band garnering new found and long overdue attention. "We released the self-titled Diamond Head album in 2016 and then The Coffin Train last year. Now we've got management (Siren), a label (Silver Lining) and an agent, so everything seems to be going really well. We realized it was creeping up to 40 years for Lightning To The Nations, and we could have just done some live shows - we did that in 2010 for the 30th Anniversary - but Karl (Wilcox / drums) suggested we re-record the whole first album with this line-up and this sort of modern sound and technology. I thought it sounded like a good idea."

"It was exciting, really," Tatler continues. "We didn't need to rehearse for it because we've been playing the songs for so long. They've evolved slightly over the years; it was just a question of trying to capture what we have live. I didn't spend a lot of time, I did the guitars in two days. Karldid all the drums in two days as well, I think. As we were going into lockdown in March, Ras wasable to finish off the vocals and mix the album at home. There was some editing that went on around the recording and it was all done by the end of July." 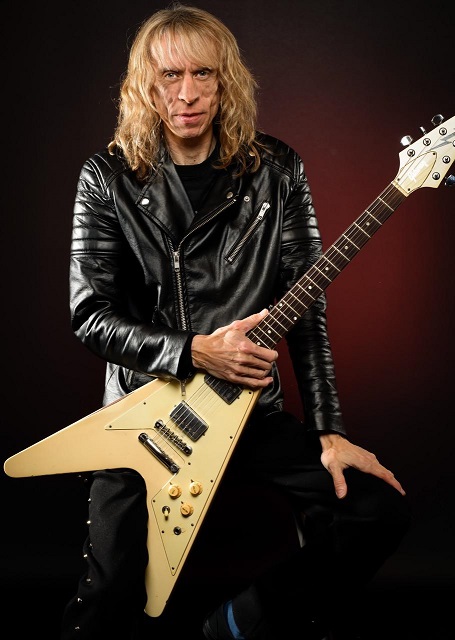 Present day production values have, of course, given Lightning To The Nations new life. The songs remain true to their original form but everything is bigger, meaner and heavier, which stands in line with today's metal climate. Looking back on Diamond Head's early studio experiences, Tatler is grateful for how much studio technology has evolved since then.

"It's so much easier and cheaper to record these days. When we made that first album we were all 19 and 20 years-old, and we'd only been in the studio once before to do the original single, 'ShootOut The Lights'. We recorded and mixed two tracks in a day. Going into the studio to do a whole album - record and mix - was quite a luxury at the time. We weren't particularly good at recording. I don't remember us being super tight. Our drummer at the time, Duncan (Scott / co-founder), wasn't used to playing with a click; we were all completely weirded out by having a click track in our headphones. We couldn't do it and we had to abandon it. Nowadays you can puteverything in time and Pro-Tools the hell out of it if you want. Over the years I've learned so much about making albums, making good quality demos at home, so I thought it was good to be able to put that expertise and experience into this new re-recording."

"Everybody in the band is talented because we've all been playing for a long time," he adds. "We're all very professional so I knew it was going to sound great. I can't see how it couldn't sound anything but great."

It's worth noting that even though Lightning To The Nations has been beefed up, the new recordings retain that classic and unmistakable New Wave Of British Heavy Metal vibe.

"I guess that's true," Tatler agrees. "I can only think that has something to do with the songs. They're 40 years old but they still sound relevant today. I can't ask for anything more than that. They don't sound tired. It's wonderful that we've been able to make this record, especially during this lockdown period when we have nothing else going on."

Credit goes to Andersen, who remains true to the original recordings laid down by singer Sean Harris while adding his own flavour. On top of that he owns the cover songs tacked on to the back end of the record, doing himself proud taking on Judas Priest ("Sinner"), Led Zeppelin ("Immigrant Song"), Deep Purple ("Rat Bat Blue") and Metallica ("No Remorse").

"I'm glad you said that; he's fantastic. We did say to ourselves that since we have a singer who can do Judas Priest or Led Zeppelin, we should definitely use the talent that's available and cover those songs. He wasn't scared to tackle them, either. He's got confidence in his abilities, he's got great range, and he had the time at home get the vocals down properly. We didn't rush the vocals for the album, they took a bit of time. Ras did a great job. He's awesome." 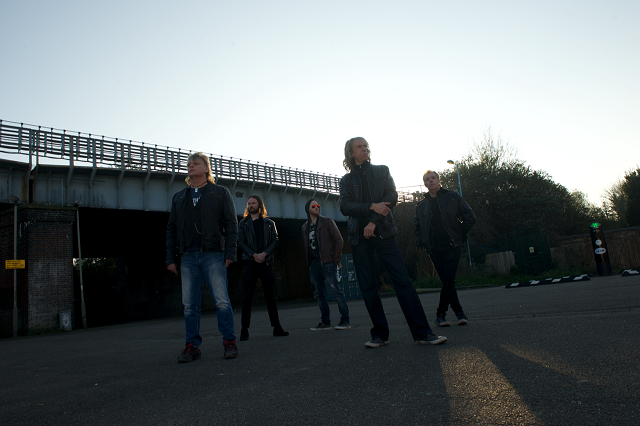 And it turns out that covering three UK bands for the album was a conscious decision on Tatler's part; as much of a no-brainer as giving Metallica a tip of the hat.

"They're bands that have influenced me. I wanted to do a Black Sabbath song and we tried a few in rehearsal, but it didn't quite work for Diamond Head. I think there must be something about the four guys in Black Sabbath, that when they make music... we couldn't add anything to it. It didn't gel properly. We had to give up on the Black Sabbath tunes and move on to Judas Priest, Deep Purple and Led Zeppelin. All along, I worked out that we were going to do 'Immigrant Song' and 'Sinner'. All these songs are important to me, and with the Metallica track it was us coming full circle. I'm really glad we did the covers. It was great fun. I don't have to stress about playing covers. When I write a song I worry about it, but when I'm doing a cover it just frees me up to have some fun as a musician.

"Deep Purple's "Rat Bat Blue" is an unexpected but welcome choice as a cover; an overlooked classic to be sure.

"It's a great track. I've always loved that album, Who Do You Think We Are, which isn't nearly as popular as the album before it (Machine Head). I've always loved that song in particular, and I also didn't want to do a Deep Purple track that... Jon Lord was such a massive part of the Deep Purple sound and we don't have a keyboard player, so I wanted to lean on a song that was more guitar oriented. We had to figure out how to do it without the mad keyboard solo (laughs)."

Tatler has never been shy about giving Metallica their due, having gone on record many times to say how grateful he is to them for shining a light on Diamond Head. Hetfield & Co. will always be a talking point for him.

"I've always been very grateful to Metallica for covering Diamond Head songs and helping us become kind of a legendary, influential band," Tatler says. "They kept the name alive, and I've met so many people that have gotten into Diamond Head through Metallica. Sometimes even apologetically, they'll say 'I never heard of Diamond Head until I heard 'Am I Evil?' Then they read the small print and wondered who this Diamond Head band is (laughs). I think that's great, though. It's been very positive for us." 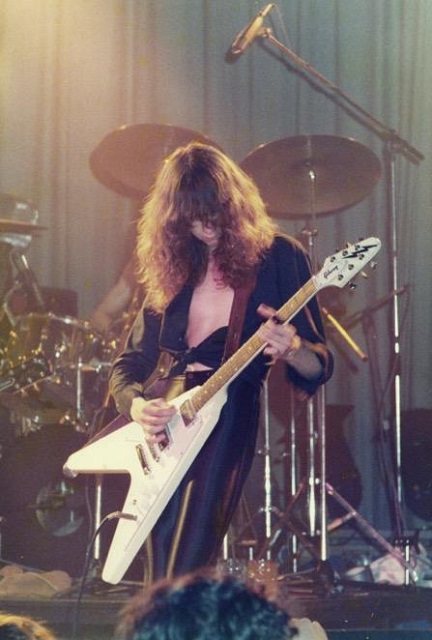 Despite the talk of Lightning To The Nations being new and improved 40 years on, many original Diamond Head fans are still alive and kicking. Asked to speculate on how he thinks the 2020 version of the record will go over with the diehard followers, Tatler says he's not concerned.

"It's their choice to buy it or not, but I think a lot of people will like it, and I think some Diamond Head fans will buy it because they have to own everything that Diamond Head puts out (laughs). Also, I think part of the thought and hope behind the record was that we may just hook in some new fans who wouldn't normally listen to a 40 year-old album. They've been surrounded by all this modern production, and how metal has moved on in 40 years is, of course, incredible. Hopefully it may pull some people in who aren't necessarily fans but think 'Oh, that's good' when they hear it online or somewhere. I think this was completely the right thing to do."