There’s a tag that many metal enthusiasts stick to stalwarts Flotsam And Jetsam. It reads similar to ‘the most woefully underappreciated band in thrash history,’ or the ‘the hidden gem of the genre.’ There’s lots of ways to slice it, but the sentiment is the same. Flotsam And Jetsam, through hook or crook, screw job or swerve, have maintained a cult following for over 30 years, yet have inexplicably failed to take that next brave step towards the mainstream where so many of their thrash contemporaries have.

Guitarist Michael Gilbert was there for the golden age of the band, that mid 1980s run that saw them release genre classics Doomsday For The Deceiver and No Place For Disgrace. He was there for the lows of the 1990s where so many thrash bands and metal puritans fell to the wayside, buckling under the weight of grunge and later nu-metal. Clashes with management and band direction led to a 10-year-plus exit beginning in 1999, though he’d return some 11 years later, replacing guitarist Ed Carlson following the album The Cold.

So when asked his thoughts on whether or not Flotsam And Jetsam are one of the most underrated and underappreciated bands in metal history, Gilbert is as inclined as anyone to answer in the affirmative, but only just, he says.

“Yeah, I won’t lie about that. I say yes, but only for a few seconds because if you dwell on that it gets in the way of what you’re working for in the future,” Gilbert tells BraveWords in a candid interview. “It can really affect what you’re doing presently. You can look back and say we made a bad decision here or our management screwed something up here or whatever, but it’s like anything else, an NFL player who has an injury. You shake it off so you can make the next play, and that’s kind of what we’ve always been about … let’s shake this off so we can get to the gig and put this behind us and move on, move forward, keep pressing on.”

Pressing on is something the Flotsam guys know all too intimately. Their management woes and brass rings just slipping through the fingertips are no secret to metal historians and lifelong Flotsam faithful. They smell like smoke because they’ve been through fire, as the old adage goes, but 2019 may mark a turning point for the three-decade plus road warriors. 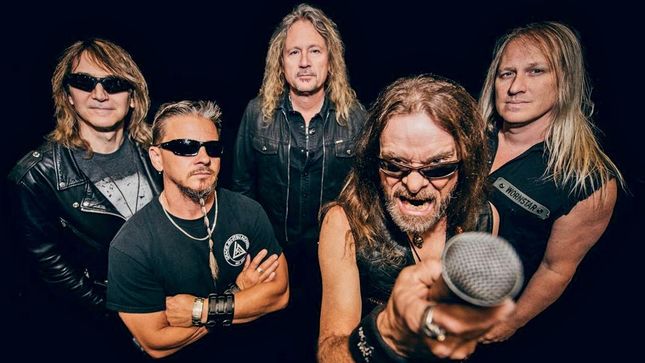 The End of Chaos, the band's’ first album with Ken Mary on the kit, follows up the groups acclaimed 2016 self-titled album, and will see them embark on a lengthy North American tour, preceded by the European Killfest trek with fellow lords of thrash Overkill and Destruction.

“I’m super proud of it,” Gilbert says of the groups 13th studio album, released through AFM. “We’ve had some issues in the past with production, musicians and stuff like that. This year I think we’ve finally hit the nail on the head and finally hit our stride with what we’re trying to do. I’m looking forward to seeing what happens when it comes out, how people take it, some of the new fans. I’m excited to get it in people’s hands and for people to give it a shot.”

Don’t get things twisted, The End Of Chaos is by no means an admission of throwing in the towel. Quite the contrary. It marks a brave new world for the five-piece, one with fresh ideas, rejuvenated spirits and a complete lack of bullshit. A bullshit free zone, if you will.

“It’s kind of the end of chaos that has been with the band over 15 years,” Gilbert explains of the album’s title, which has caused much fan discussion. “In the ‘90s things got really crazy and we were trying to find ourselves. Music was changing with the general public, it felt like the metal scene kind of went away. A lot of metal bands were looking around like ‘what do we do now?’ What we really wanna create was the metal, but still there was a lot of great music that came out of that era. You had the Seattle flannel movement, which is all great. Music is a constantly moving thing, the trends. People want different stuff and it’s hard to lock onto that. If you’re trying to lock onto that whole thing you’re never going to hit it. You’ve got to stick to what you know.”


Gilbert sees the new material, and by extension the 2016 record, as a return to form for the band, who have clearly punched tickets as finely defined thrash practitioners with a power metal sophistication.

“As of last year with the self-titled record we kind of went back to our roots,” he says. “Let’s not stray too much from that, and keep it speed metal and power metal now. We’re trying to get back to our roots and let AK shine as a singer. That guy, holy shit, he’s impressing me.”

Discussing the timeless vocals of Eric ‘AK’ Knutson, and all hands agree that the man has only grown better with age. His talents are on full display with The End Of Chaos, with the aggressive war-cry of “Prepare For Chaos” coupled with more sweeping ear-worm tracks like the standout “Recover”.

“I can’t even explain the type of dude he is,” Gilbert says of his frontman. “We’re on the road and we had all kinds of trouble with our bus. On this last tour we had three or four flat tires and we had a trailer axle that broke in half. Here’s AK out there, changing the bus tire, and he goes in the bathroom, washes up and then he goes and does his set. Dude, what are you made of? He’s like the steel-belted radius of human beings. He’s a maniac and a great singer and he’s one of my best friends. I love the dude and have nothing bad to say about him and I’m super proud of what he’s done on this record, maybe more than any other record we’ve done.”

His enthusiasm for the lineup carries over with the addition of Mary on drums, who Gilbert admits fit the Flotsam formula from their initial jam sessions.

“When you jam with somebody, you pretty much know if the person you’re playing with, whether it’s going to work out in maybe the first ten bars of a song you play together. When we did tryouts for bass and drums, you can always tell. We’ll give people three songs to learn and they’ll come in and you can tell if it’s going to work by that first song. It’s just a thing, you feel it. With Ken I felt it right away. This is the dude, he totally nailed it. All auditions were totally off after that. He’s like one of the most polite humans I’ve ever met, he’s super funny and he’s easy to get along with on the road. He’s just awesome, I love the guy.” 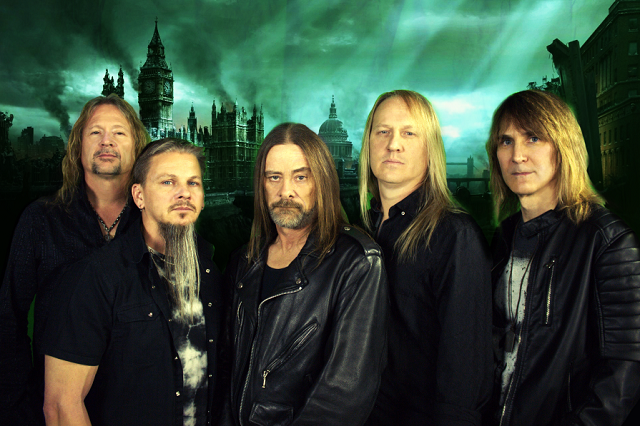 Admitting that the album throws allusions to some of the chaos that defines the web and social medias – politically, socially, economically – the band is hesitant to call this a political album, preferring to use their patented blend of heavy meets melodic metal as an escape for fans, rather than a tool for messaging or agenda.

“We don’t do the political stuff because we feel music is our escape,” Gilbert says. “It’s one of people’s only escapes to get away from what’s going on the world. They get stressed out at work and they’ll listen to the radio on the way home and there’s shit going on with the government. They get home and they’re stressed out about money and all kinds of other shit. It’s nice for them to put on something and let them forget about it all for a while. There are some bands out there that I dig, Rage Against the Machine is probably the biggest one, that has some sort of political stance. I can listen to that band and shut off the meaning of what they’re singing of and lock on the groove. I don’t think it's a really great platform. It is a good platform to speak your views but on the other hand you’re almost trapping people, because if they like the music they’re forced to listen to whatever you’re singing about, which blows. AK tries to put in his life experiences, trials of life that he has had. On this one I think he’s done of great job and I think he’ll really connect with people on a personal level.”

So is the magic back? This is Gilbert’s third album with Flotsam And Jetsam since his return in 2010, and he’s quick to admit his exit all those years ago had nothing to do with contempt for his bandmates.

“When I left it wasn’t because of any of the guys in the band or anything like that, it was just because of how management was taking care of things and everything was really just disconnected,” he explains. “I don’t like it like that. When I go to rehearsal I like to hang out with my buddies and play music with them. I don’t want it to feel like a job or feel like something I have to do. If I don’t get along with someone I don’t hang around with them. It wasn’t about any of the guys in the band and it sucked in that aspect because it was a huge decision in my life, but they understood and I think they were kind of there too with the management going ‘what the fuck is going on with this band?’ We had all these outside figures telling us what to do but we’re the ones that are creating the basis for everyone else to do some work with. Everything was backwards, kind of like the American government right now.”

It goes back to missed opportunities, the screw jobs and failed promises that prevented Flotsam from reaching big four levels, or even that of fellow tour mates Overkill, Exodus or Testament. But Gilbert and the Flotsam crew are living life with a glass-half-full mentality, realizing they have one of the more dedicated fan-bases in metal. That’s something you can’t buy, especially in a day and age where every metal fan with a guitar and internet connection has a YouTube channel.

“I never want to take it for granted and the other guys in the band feel the same way. We coulda had this, we shoulda had that, being the victim, but I don’t think we’re victims. I think we’re fortunate to be where we’re at, still create music and make music and go out and play for people and meet people. We’re definitely fortunate.”

If fortune does favour the bold than there is little doubt that Flotsam And Jetsam should have something of a fortuitous 2019 with this bold, cutting and hard hitting album that defines a band that has more mileage left than meets the eye.

“I think it’s the strongest lineup we’ve had, at least equal to or greater to the first rendition of Flotsam in the Doomsday days,” Gilbert says. “With the addition of Ken, Steve Conley and Michael Spencer, I think we’re the strongest we’ve ever been. There’s something about Steve and I when we’re writing music together and we have different styles. Then we’ll give it to AK and we just have a different factory for making music and how we’re doing it these days and it seems to be more efficient. Plus everyone has a say in what’s going on, really valid ideas for changes. When you’re writing music and you’re in the boundaries of what we’re doing, and people hear it outside of that in a different way. It’s a healthy, positive way to put songs together and it’s definitely a strength of the band that we haven’t had before.”