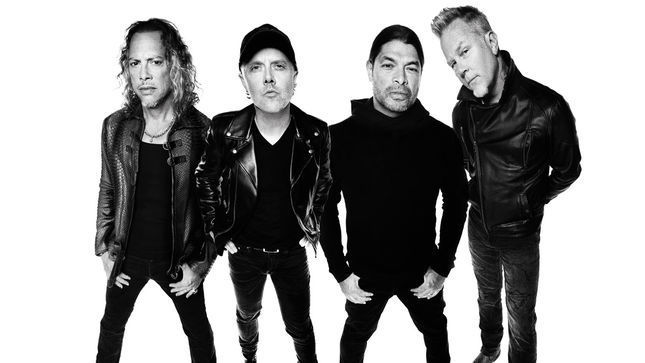 It's out and we all breathe a sigh of relief! Not only have we heard it, but we've watched it! And mucho thanks to Metallica for letting us debut "ManUNkind" (watch the black metal frenzy and Lords Of Chaos movie sneek peak here)!!! You've read our intial synopsis a few weeks ago here. But opinions are like assholes. We ALL have 'em. And let's be frank. We all want Metallica to hearken back to the glory days. So it's time to present BraveWords' complete opinion about Hardwired…To Self-Destruct. And our able-bodied scribe Jason Deaville was up for the challenge. It's just an opinion. But we think it's the best Metallica effort since the Black Album! Check out the 8.5/10 review below:


Let's start this off by taking a trip back in time. There are many of you out there that believe the machine called Metallica died back in '86, buried alongside their fallen brother, Cliff Burton, in the very cemetery pictured on that album's cover. I'm certainly not going to argue this notion, as it is clear that every post-Puppets record has lacked the combative, raw, predatory palpability that made it an instant classic. Perhaps the boys in Metallica envisaged their eventual demise from the world which they created, and reflected this in the artwork and warlike quatrains contained within. A closer look reveals puppet strings dropping from the heavens, piercing each and every obelisk jutting from the hallowed, overgrown landscape. The image is both disturbing and beautiful - a never-ending struggle from beyond the grave with unseen forces and the powers that be. For the more observant - metaphorical - of you out there, an even closer look reveals what appears to be several zombified limbs desperately clawing their way from earthen tombs.

Buried alive, yet never forgotten, the members of Metallica have arisen - clutching, with dear life, the very same intensity and attitude last seen exactly thirty years ago. Many of us had high hopes some eight years ago with the release of Death Magnetic, yet, just as that album's cover depicts, the confines of the proverbial Metallica casket had yet to be truly conquered. Which brings us to the here and now - with 1986 feeling like a lifetime ago. In what almost seems like an act of defiance - retaliating against those who left them for dead - the cover of Metallica's tenth studio album, Hardwired... To Self Destruct, depicts the bust of each and every member, who can be seen exhibiting impassioned, ferocious, malice-filled expressions. Those of you grey enough in the temples will recall those very same expressions staring back at you from the inside of your high-school locker, ripped straight from the center of your favorite glossy metal magazine of the time.

I'll be honest, it might require several listens of Hardwired... To Self Destruct under your bullet-lined belts to truly identify the kinship it shares with Master Of Puppets, along with some nods to its predecessors. This isn't to say the entirety of the album is delivered with machine gun-like ferocity. Apart from the dizzying opener and closer, "Hardwired" and the "Battery"-like attack of "Spit Out The Bone" (respectively), much of the album has little in common - on the surface - with Metallica's trademark thrash attack. The familial aspects are more apparent when one takes the time and patience to dig into that sepulcher a little deeper; hidden within is a myriad of down-stroked, palm-muted, galloping riffage that can be found in songs such as "Now That Were Dead" and "Dream No More", with the latter also taking on the crushing, moody disposition of the gargantuan "The Thing That Should Not Be", and the puppet show doesn't end there.

Sticking within disc one of the two-disc (three disc, if you happen to have the deluxe edition), nearly hour and a half of music, one is treated to a couple of more homages to the past, with the guys firmly planting themselves in the present, while also writing their future. The duo of "Atlas, Rise!" and "Halo On Fire" contain perhaps the album's most addictive moments - the build-up that begins with each song's verse, through pre-chorus, straight into the roiling, beautifully-corrosive vocal performance of one James Hetfield found within each chorus. Like the massively imposing man that he is, James has never sounded better. Not unlike a fine wine, he ages impressively - becoming almost mythic and chimerical in his poise and presence. Blessed with the voice of an all-knowing, all-consuming Titan, James, like Atlas, takes the weight of the world on his shoulders. When it becomes too much to bear, the entire world trembles - crushed under the weight of his words. I gotta say, "Atlas, Rise!" is - by far - the album highlight, with it's unbelievably epic build-up, and those oh so beautiful Maiden-like harmonies. Perfection.

Disc two opens with the triumvirate of "Confusion", "ManUNkind" and "Here Comes Revenge". The first of three songs begins with a militaristic-like drum march, similar to the classic "Am I Evil". It quickly transitions into Death Magnetic territory, particularly in the first verse, sounding like a spiritual successor to "The Day That Never Comes" - both musically and thematically. The second song of disc, "ManUNkind" recalls the swagger and swing of mid-to-late 90s Metallica, though, filtered through a "Lords Of Summer"-like  approach - it's pacing is catchy and mentally enslaving. The last of disc two's opening trio, "Here Comes Revenge", once again recalls the mastery of puppets - with the crushing opening punch of "Leper Messiah" immediately coming to mind. Nearing the tail-end of the album, metal fans are graced with a rousing ode to a fallen legend, who the band refer to as the 'The Man In Black'. Any guesses? Yep. They are of course speaking of one Ian "Lemmy" Kilmister, who is brought back to life in the song "Murder One". Welcome home, Lemmy... you've been missed!

In the end, Metallica have delivered their best album in decades - without question. If, like me, you love your Metallica raw, driving, and aggressive-yet-subdued-where-it-makes-most-sense, then you can't go wrong with Hardwired... To Self Destruct. There is no doubt that the band is now at the pinnacle of their career. To be releasing poignant and relevant material all these years later - that relates to a huge cross-section of the populace - is an incredible feat that has yet to be matched. We are all puppets under their mastery. Thank fuck for the mighty Metallica.

Hardwired...To Self-Destruct is Metallica’s first studio album since 2008's multi-platinum Death Magnetic. The album was produced by Greg Fidelman, who engineered and mixed Death Magnetic, and is available at Metallica.com in various configurations including: CD, Vinyl, Digital, Deluxe, and Deluxe Deluxe Versions.