After a day of press in Toronto (I talked to Kirk—feature coming), Metallica hit the stage for a club show in front of a jam-packed Opera House, capacity somewhere around 1100. I remember a Zakk show close to this full there, and even Gov’t Mule, but this was tight, tight, tight.

James cracked from the stage a couple times, words to the effect of “Nice place for an opera,” trading on the name, perhaps not realizing that this was Toronto’s most storied down ‘n’ dirty old theatre, home to all sorts of concerts, but also the go-to place for hundreds of metal shows, usually stacked three and four bands deep, usually mounted by honourable and hard workin’ promoter Noel E. Noel and his Inertia biz.

Long lineup to get in, but that was likely because most of the tickets would have been at Willcall, I imagine. Rumours went through the crowd of a computer hack and that there were 3000 tickets circulating and we weren’t gonna get in but that proved groundless. Rumours also persisted of tickets going for $1000 and even $2500.

Kick-off time had been set for 9:00 but then through a morning email notice, bumped up to 8:30, with the band splitting the difference and going on about 8:50, blasting into “Breadfan” by Budgie, timeless despite its first album appearance in 1973.

Lights seemed to be par for an Opera House show, no backdrop, a few “M”s on some of the equipment, but visually nothing of note, except for a cool sort of star shower light effect, usually on Lars, I believe, popping up a handful of times outta nowhere.

But the sound was sharp and loud and perfect, the type of show where you’d pull the earplugs out a few times, which... in my case, I tend to take ‘em out for those magic moments, drink in the metal, put ‘em back in.

Next up was a punky “Creeping Death” and an expertly thrashy “Battery” and the crowd was in a state of mosh-mad mania, only without the moshing, because there was no room to move. “Sad but True” and “Fade to Black” slowed things down, but then the first of three new songs, “Atlas, Rise!” cranked things up again. This one, like much of the excellent new Hardwired... To Self-Destruct album is punctuated by the band’s increasing love of military precision punctuations and Kill ‘em All-era chugging. Best brisk mid-paced classic Metalli-groove of the night so far.

“Harvester of Sorrow” was followed by “Moth into Flame,” another headbanged cruise track that fit effortlessly in with the classics. After this one, Rob turned in a grinding, noisy bass solo, Trujillo and his braids stalking the stage, as he did throughout, often switching positions with James (stage right and centre), with Kirk staying mostly stage left. As for Kirk, his soloing was often and awesome, and relentlessly wah-wahed and perfectly drilled forward in the live mix. And let’s not forget, he’s gotta keep up with the fastest right hand in the business, as James is often quipped, on rhythm as well—busy guy. 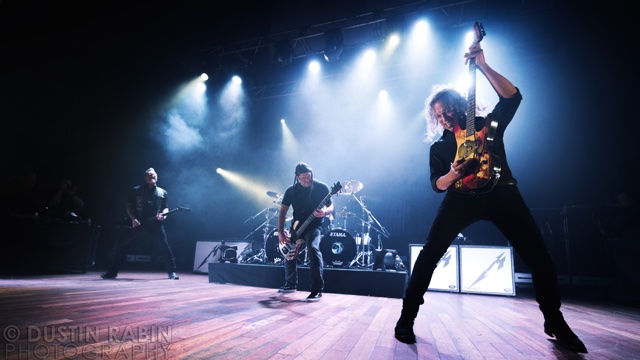 “One” was followed by “Master of Puppets,” which didn’t come off all that great, because like most of the chestnuts, it seemed sped-up and too punctuated by Lars. Lars is an interesting case. On Death Magnetic and Hardwired... To Self-Destruct, he’s becoming increasingly Lars-like and signature and unique, with all those wide single stroke snare rolls, the pushing of the beat, the beginning of his simple fills a few beats back, the non-obvious closing of those fills. But live, with that extra bit of speed and looseness, he does all of these things even more and those parts we all love often blur by. It sorta didn’t work on “Master” and “For Whom the Bell Tolls” suffered from hepped-up energy from him and all of the guys as well. I dunno, for a monster slow-boiling classic like that, it’s like you wanna hear the guys take a deep breath and lay back a bit, smooth it out.

But then again, these cool extra bits of window-dressing add an almost jazzy musicality and subtlety at times. Next song, “Enter Sandman” was not an example of this, but first encore selection, “Whiskey in the Jar,” most definitely was. The interplay between Lars and the guys, the guitar licks woven by James and Kirk, the vocal melodies... this was the most sophisticated display of the night. But it was a tapestry, rather than shotgun stops and starts, and it soaked in that (three of) these guys have been playing together for 34 years.

Second encore song, “Hardwired,” is of course the new speedy metal thrasher, one of two, two-and-a-half, three, four (when you add up the passages!) on the album, and it went over a storm. By the way, James talked a fair bit through the show, in his usual welcome and appreciative shy tones, asking if we all bought the album (holds hands a foot apart) or the album (five inches apart) or the album (tapping away at a keyboard). 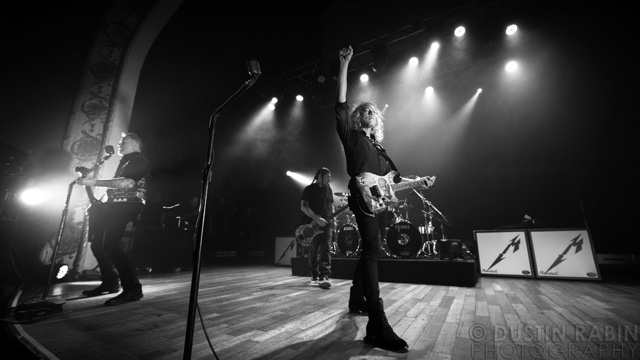 Final song of the night, “Seek and Destroy” is another graphic example of where the band’s evolution as players, especially Lars, pays off in spades. The song is rudimentary enough that when you add the rhythmic flourishes, it complicates it just enough. But of course, no one chugs better than Metallica, and the guys know when to let that metal majesty envelop the room like a plush velvet blanket—“Seek and Destroy” is rife with a bunch of that and it doesn’t disappoint.

After the show, the band lingered on stage for quite a while, in an endearing display of not quite knowing what to do, as if this was their first time ending a show. They tossed out tons of picks, occasional walked up to the mic and said something, and James even got us all clapping and chanting as if the band could be goaded into another song. But the joy that had James often saying through the show “That one felt good” was obvious on their faces, as they eventually skipped off to jump in their bus, waiting, comically like... that must be no more than 30, 40 feet from the edge of the stage, at that place.