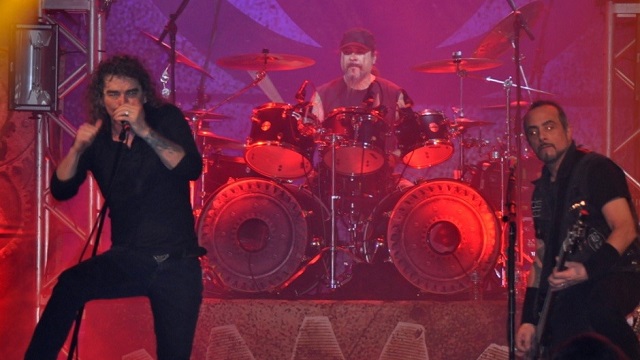 Offering various musical shades sampled throughout Overkill's career, without sacrificing their trademark thrash, The Grinding Wheel is a far reaching record, something of a coup, after 18 studio releases. Frontman and amateur comic Bobby “Blitz” Ellsworth met up with BraveWords on the first night of the current North American tour, backstage at the Trocadero, in Philadelphia. Both of us had survived the 70,000 Tons Of Metal cruise ten days earlier and so after a quick recap, talked turned to the new disc.

Several songs are more introspective, moreso than the past. “As we get older, we tend to think about things more,” states the singer. “This isn't immortal, it won't go on forever.” One of the tracks (necro)shining the spotlight inward is “The Long Road”, which would also seem to dovetail with the titular concept of a grind/grinding wheel. “Of course it's autobiographical.” Cites the lyrics: Bring your attitude & bring your will to win. We're going down the mountain boys. May take it on the chin. “We're in this thing to win. I'm competitive. I'm a sports fan. Every night, we go out to win. We might not win every time, but it's never gonna be easy. People ask me about politics, but I don't feel qualified to comment. As we get older, we get more introspective because the one thing I truly feel qualified to speak about, is Overkill. I've known this longer than I've known my wife!” 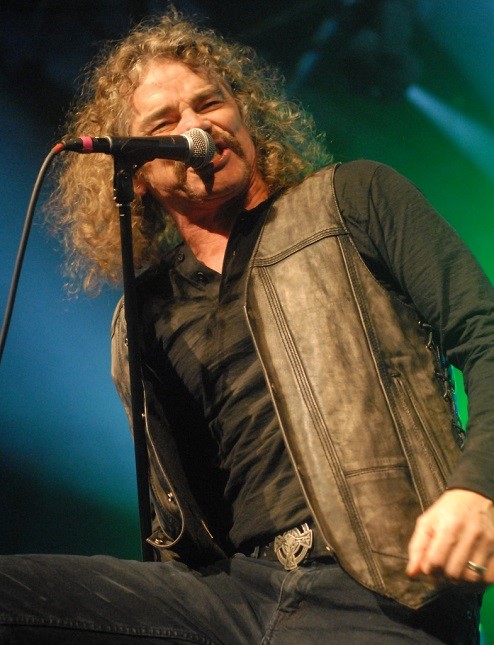 Some may wonder why two songs with virtually the same title; “The Wheel” and the title track are side-by-side, rather than spread throughout the running order. “When we were creating this, I said the two had to be back-to-back. I loved the idea of having 13 minutes of music to play with. The character, or the miller, is the link between the two. In the first one, he's talking about how he'd love to be able to sit back, relax and have a beer (like we're doing here), but he has to get back to the grind: ('I'd love to sit, to have a drink, to feel)'. He has to continue working, which is where 'The Grinding Wheel' takes over. I had the first part all ready to go but the last song gave me all sorts of problems.”

I propose to Blitz that this song too is semi-autobiographical, the band being the ones to slog through the musical industry grind: record, tour, promote, repeat. Grind being a word with multiple meanings and connotations, including a metal sub-genre. The vaping Ellsworth jumps to respond. “I don't see grind as negative,” claims the singer. “I relish the challenge, to get up, get to work. I'm third generation American: 'Shut your mouth & get to work'. There's some good advice in those old words. You won't see us airing dirty laundry. Certainly won't see us commenting on social media (visitors on the tour bus have to turn off their phones!).”

Which means the upcoming DVD won't feature Motley Crue/Steel Panther backstage voyeurism. April 2015, the band (and myself) were in Oberhausen, Germany, capturing both the debut and Horrorscope, on film, in their entirety. The band plan to finish post-production editing once the tour is over, with sights set on a fall release. “We plan to do another US run in September, so we'd like to have something out at that time. There were not critics or skeptics, it was like inviting a bunch of your friends out. The local fan club had printed up this card stock banners, replacing the beginnings of Oberhausen, with Over (in green band font). We didn't know it, but when we came out onstage (after your eyes adjusted), there were all these signs, reflecting off the lights, it was amazing. You'll get everything.” As if to drive the point home, he (only half) jokingly adds, “I think we recorded that thing four times that afternoon, before we went on!”

As to the title “Let's All Go To Hades”, on the new CD, the pride in his lyricist craft steered Ellsworth away from the hackneyed use of H, E double hockey sticks (despite being an avid NJ Devils fans). “Pride is another word, like 'grind', a double-edged sword,” he observes, before answering. “Seemed a little cliché,” he offers,” 'See You In Hell', 'Rock You To Hell', etc. It's a shout out to my good friend Dan Lorenzo, with whom I started the band The Cursed. I could just envision his bearded face when he realized I rhymed Hades with Mercedes!” (cackles).

I kid him about Hades being another of the veiled New Jersey references (“Ironbound”, “In Union We Stand”, etc.) that crop up in his lyrics, a long running in-joke between us. “I've got to send you the bonus track. As much as I thought about Dan with that song, there's a line which says 'Bury me under the GWB' (George Washington Bridge). When I wrote that, I was thinking about you (and what you're always saying).” 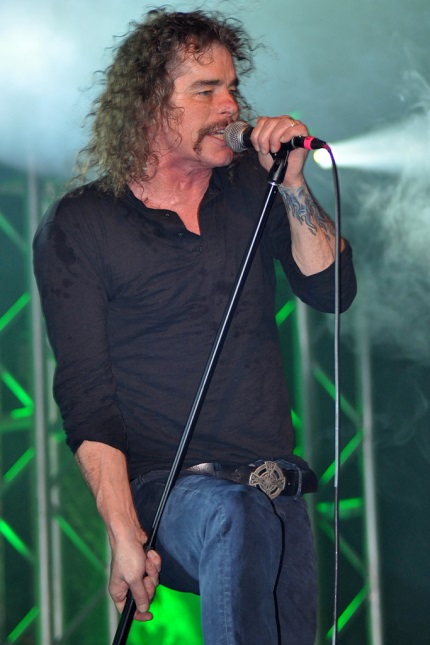 The bonus he's talking about has yet to see the light of day, but there's already a couple of extras floating around. First and foremost, “Emerald”, which comes with the digipak. “Was looking for something different. Was toying around with Eric Burden & The Animal. Always thought 'House Of The Rising Sun' was something we could do a killer rendition of. This is a democracy, even with those that don't have any role in the songwriting. I kept hearing this voice behind me, saying 'Emerald'. It was (guitarist Dave) Linsk. I thought, why does he want to do that song? So I re-examine it and thought, 'Aha, you want to go sick on the guitar solo.' and I think he did a fantastic job. Thin Lizzy were one of the first concerts I saw. Saw Queen and Thin Lizzy opened. They're not really part of the NWOBHM, but they were one of the first bands doing this (twin guitar, proto-metal) thing. We're sort of their seed.”

The band aren't averse to playing other people's music (“Fuck You” is not there's although they've undoubtedly co-oped it, at this point). Last fall, at the Rock Carnival, in Lakewood, NJ, they closed the set (somewhat uncharacteristically) with AC/DC. “It's not the first time we've played 'Dirty Deeds'. Few years back, Mark Tornillo, from Accept came up and sang it with us, when we were on tour. It just comes down to doing something fun and unexpected. That day, in the rain, just seemed like the right time.”

What may shock some fans (although not really, if you look at the similarities in attitude) is the version of Johnny Cash's “Man In Black”! “My voice can only do one thing, Overkill. Back when I was doing The Cursed, bought a (Johnny Cash) compilation and listened to it, to get in touch with my lower register. DD (Verni, bass) was doing Bronx Casket Company at that time and I thought it would be cool if they covered 'Sunday Morning Coming Down'. So one day, I come to practice and there's Willie Nelson Verni, plucking it out on guitar. I said, 'How about a duet?' We actually did that recording back on the Electric Age session and gave it to Rock Hard (magazine, Germany) to use as a 7” single (backed with Kreator's ‘Warrior Heart’). So it's been sitting around for five years.”

Not many things gather that much dust in the Ellsworth/Overkill world. Persistence and work ethic typically grind under all those standing still. Maybe these elder statesmen are a little craftier (proud of a job well done and stubborn enough, not to let it vanish) than which they're given credit. Then again, they don't care what you say.