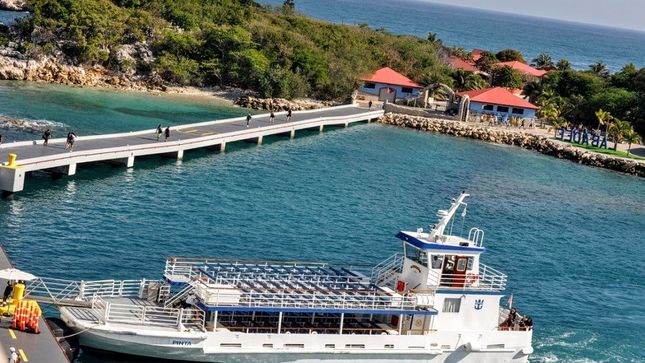 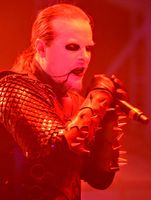 After breakfast, BraveWords disembarked, for a few hours in the sun of Labadee, Haiti. Actually, it's just a private plot of land, owned by Royal Caribbean, so no access to the locals (and vice versa). There are a few activities available to while away your time (and unload cash from your wallet), most notably, zip-lining over the inlet, but those who venture off the ship (many sun-averse passengers stay back, to catch up on sleep, shop, gamble or just keep partying) seem to enjoy the scorching heat, white sand beaches and clear blue water. This year, there was even a floating bar, accessible by walking into the waist high waters of the lagoon. Non-alcoholic drinks and a light lunch is catered in the shaded picnic area, by the cruise line.

In discussion, mentioned that after two days, I'd still not witnessed that “one” special concert moment, this trip. Last year, it came on Day 2, with Necrophobic destroying the ballroom. With only a shortened post-island viewing experience, beginning at 5 PM today, was beginning to worry. Once back on the boat, showered and under sail once more, the first must-see act of the abbreviated entertainment portion was Vicious Rumors. OK, had just seen them less than 24 hours prior (and in a better setting than the pending minuscule Lounge gig), but it was a completely different setlist from the night before.

The low ceiling and playing off the floor are not conducive to shooting photos in the Lounge, thus selected a comfy arm chair and sat down to watch the show. Geoff Thorpe wandered through those that gathered early, shaking hands and thanking them for attending. “Worlds And Machines” commenced the second VR set, Nick Courtney using a vocal mix of Bruce Dickinson and (early on) Blitz. The music followed suit with a Maidenish gallop. Continuing with side two of the Digital Dictator disc, “The Crest” is backed up with speedy, shredding guitars of “R.L.H.” (aka Rock Like Hell). With synchronized beats, come the break, Courtney's yelps are nearly as high pitched as the guitar squelches! “Condemned” and “Six Stepsisters” begins with Larry Howe laying down a barrage of drums. Eventually, it transitions into the classic (less frantic) “Soldiers Of The Night”. The crowd is asked to sing the titular chorus, a cappella (OK, accompanied solely by Howe's snare, keeping time). After “Murder Ball”, have to move on, there's more to see (and actually photograph) up on the pool deck.

Hard to fathom that sinister black metal would ever have a home on a cruise ship, let alone a spot on the coveted Pool stage, but so be it. Dark Funeral, under just darkened skies. Some were joking that a couple of red, sunbaked Swedes, in corpsepaint, might make it look pink! Rest assured, there were no such visual discrepancies. Colorful light display, or red, yellow, and yes, pink as they tore through the likes of “Unchain My Soul” and “Where Shadows Forever Reign”.

As mention in the Day 2 report, had bypassed Paradise Lost's after midnight showtime, in favor of some addition shuteye, prior to the Night Demon extravaganza. The Brits ended up going on more than a half hour late, so it was time well budgeted, on a limited sleep account. The second set, while spanning decades, relied more heavily on Draconian Times/Icon era material (yeah!), opening with “Embers Fire”. From the get-go singer Nick Holmes was in rare form, offering up snarky commentary and self-deprecating humor. After inquiring “Are you drinking,” he responded, “So am I. Could do with a piss.” Indirectly referencing yesterday's late affair, he introduced blue tinged “Hallowed Land” saying, “We are Paradise Lost and we played on deck, four hours ago.” Might have felt like it. Gregor Mackintosh has always slung his left-handed guitar low, but it's even more so, these days. Piped in keyboards begin the green lit “One Second”, Holmes voice more prominent in the mix than remembered. The Depeche Mode they always wanted to be. Cheeky Holmes asks for requests, then reneges, adding, “We'll placate you, but just play what's written here (motioning to the setlist at his foot). Apparently it's a successful stage technique, seen plenty of bands use it.” During darkly lit “Faith Divides Us” he mockingly chides the throng, “At least pretend you give a fuck!” Hunched over, nearly headbanging at knee level, guitarist Aaron Aedy enjoys the more lively “Shadowkings”. Mentioning their sophomore effort, the singer continued to lay it on thick (tongue in cheek), “Title track from our second album kind of started the whole gothic metal thing. Evanescence are truly gothic metal, but this one is called 'Gothic’.” Symphonic embellishment and female vocal accompaniment are obviously sampled (as neither are onstage), so when completed, Holmes deadpans, “Our small female vocalist is very shy, hidden behind the drum kit.” The title cut from Medusa if offered next, then another ‘90s chestnut, “Pity The Sadness”, ultimately ending with “The Last Time”. Fun times.

That might have proven to be my favorite set, as much for the comedic element, as the vintage music, but the next band on would prove to be THE band of the weekend, Sodom. For nearly 40 years, Tom Angelripper has steered his no-nonsense thrash act through thick and thin, but rarely would be considered amongst the aesthetically pleasing. However, now augmented to a foursome, reunited with guitarist Frank Blackfire, Sodom is a lethal killing machine, once more. This was almost entirely an old school set, honing in on a trio off the initial EP, up though Agent Orange. What's not to like? Nonchalant, Angelripper rarely moves, but Blackfire is his antithesis, seeming shot out of a cannon: all over the place. “Outbreak Of Evil” comes quickly, on the heels of the “Agent Orange” opener. The dual guitars not only thicken the sound, but allows little subtleties while the band is thrashing away. “Saw Is The Law” is fun, and there's something appropriate about “Conflagration” filling the stage with smoke, ala Motorhead, 1980. “Nuclear Winter” sees the returning guitarist up on the stage front wedge monitors, fingers running up/down the fretboard (with lots of hammer-ons) and striking all the rock star poses. Well, as much as Sodom will allow. A revitalized “Witching Hour” begins a glorious concluding run that includes “Obsessed By Cruelty”, “Blasphemer” (yes!) and “Ausgebombt” finale. Brutal. There's a lot of life left in this old (snarling) dogs!

Second time witnessing Tiamat perform the entirety of their amazing Wildhoney album, in the last six months. As much as I love the album (certainly near the top of my Nineties decade's best), feel it doesn't really convey a festival vibe. Maybe it's the after midnight hour, concluding a hot/sunny, energy sapping day, but their minimalist, atmospheric doom seems to run counter to a boat of crazed, booze guzzling fans. Johan Edlund strapped on a red Strat for much of the fog shrouded set. Paradoxically, it's not a two-guitar album. The complete “The Ar” sees the enigmatic frontman standing with his back to the crowd. The crowd chants for “Gaia” at the appropriate time, yet other moments, struggled, unsure when to applaud or when it was merely a segue into the next song, without an discernible breaking point. Do yourself a favor, listen to this masterpiece in the privacy of your own home (preferably lights out), without interruption.

No ultra-late night heroics tonight (although already after 1 AM when the Swedes took their final bow). Still running on empty from the day/night before and want to survive the final events, on Super Bowl Sunday.