ABBATH – Far Beyond Quiet In Philly! 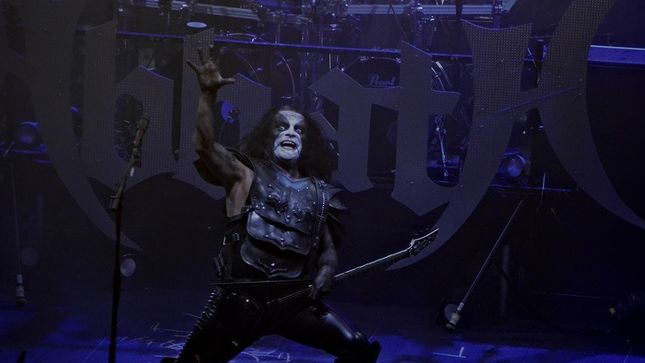 Sunny, late October, with temperatures approaching 70, a far cry from the former Immortal frontman/guitarist's Norwegian home. Even if an earlier incarnation of this venue was as a trust company, thankfully drink prices at Union Transfer don't compare to those in Oslo or Bergen (can't say the same about the band's merch). Rare to be confronted by a living meme, but here was Abbath, in the flesh. A steel plated logo, bearing his stage name, spans the width of the drumkit (and beyond). While we weren't treated to any of his legendary stage banter, he did ham it up a bit, and obliged with a between song demonstration of his sideways "crab walk." An otherwise darkly illuminated stage was repeatedly blasted by flashing strobes, with plenty of red, green and (predominately) blue lighting. Many of his stage mannerisms were gleaned from KISS bassist Gene Simmons (to say nothing of the corpsepaint/make-up). Hunched over the mic, or bent at obtuse angles, legs splayed wide apart, he occasionally lifts a studded boot, horizontally, in front of him. When he gets really excited, he over exaggerates his headbang, as he plays guitar. An electric fan kept his black mane billowing throughout the performance.

"Count The Dead" kicks things off, a searing guitar cutting through the rumbling speakers. Surprise, it's not Abbath, but rather Raud (aka Ole André Farstad). Overhead, yellow beacons pierce the red hued stage. A couple songs later, a frenzied mosh pit breaks out, followed by the odd crowd surfer. Easily the highlight of the evening, a trio of Immortal tunes were delivered, in succession (one by one?). "In My Kingdom Cold", with its spiraling guitar (come the titular chorus), was greeted like an old friend, the crowd adding their collective voice. Pulsating blue lights are accompanied by plumes of white smoke, as similarly colored searchlights sweep the stage. A thunderous, grinding "Tyrants" is stopped midway through, the guitarist with arms folded across his breast plated chest (jokingly tells everyone to "Shut up!"). Prior to segueing into buzz saw riffing "One By One", the former offers a rare moment of subtlety (Abbath's guitar solo), complete with extra smoke and strobes, Abbath, stage front. There's another jangly guitar, to begin "Outstrider". Syncopated strobes and lots of flailing hair, across the stage, during "Winterbane". "To War!" closes out a professional set. Know the tour is days from completion, but having seen the man before (both solo and as part of Immortal) felt a bit of his fun-loving sense of humor was missing. Don't ever change Abbath!

Obituary were technically the headliners, celebrating the 30th anniversary of their Slowly We Rot debut. Do these Florida good ol' boys have the longest hair, as a band, of anyone, these days? The rambunctious Midnight was also on the bill. The suddenly ubiquitous Cleveland trio, their faces hidden behind hoods, a thick layer of stage fog and lack of adequate lighting, throw themselves around: bending backwards, rolling around the stage and jumping off wedge monitors like skateboarders navigating a half pipe.