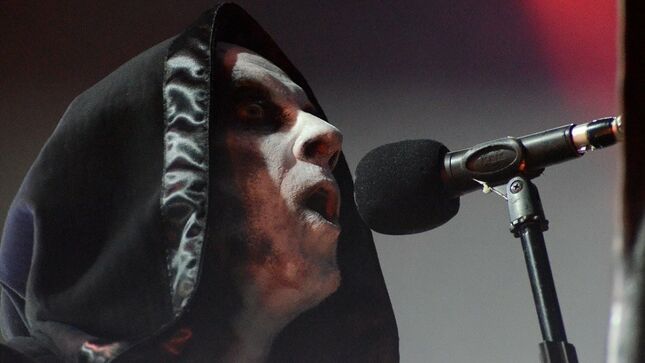 With the glut of post-pandemic tours, short-term, fans may reap the benefits of cool double bills/co-headlining packages, like this: Arch Enemy and Behemoth, both capable of doing the Fillmore on their own. Typically not mentioned as such, but the line-up for Arch Enemy truly is a super group, the individuals having had considerable success outside the current band. The Enemies decided to include a few of "new" songs in their set, such is the power of the Internet, fans capable of getting new music without a proper release (Deceivers is planned for a July unveiling). Alissa White-Gluz (in lace-up leather jumpsuit, complete with metal spikes down the arms) is one of the most dynamic fronts in hard music. While most guys lumber from side to side (if they move at all), she plays off both guitarists, mainstay Michael Amott and newcomer Jeff Loomis. She climbs the drum riser, jumps around, punches the air and seemingly always with a clenched fist.

They open with "The World Is Yours", in turn, each of the axe men are spotlighted, in white: Amott, with his blood splattered guitar, stage right and Loomis to the left. Shuffling between them, and occupying the middle ground (avoiding White-Gluz the whirling dervish) is mountain of a man (but a soft-spoken gentle giant) Sharlee D'Angelo, on bass. Wise, keeping single "Deceiver, Deceiver" early in the mix, when fans' intensity is built up. Although an initial live listen, for most, it's devoured like a returning favorite. Speaking of which, the always vicious "Ravenous" follows. The two guitarists meet, center stage, spot lit, while the rest of the stage is dark crimson. White-Gluz implores the crowd to sing along to the titular chorus, as Loomis blazes away on some sick squelching leads. Back-to-back with the yellow and copper illuminated "War Eternal" makes for a lethal old school combo. Between songs, the singer addressed the crowd and is heartfelt about being able to convene with crowds and do the thing they love, play music, once again. Newbie "House Of Mirrors" is bathed in blues/purples, Amott searing away on the fretboard. Pulsating blue lights, including some high intensity headlights, shining from behind the band, kick off "The Eagle Flies Alone", a mid-tempo number that recalls Amon Amarth (not a bad thing). "Handshake With Hell" (another song preview) utilizes plenty of strobes and when Alissa opts for a toned down, clean vocal, the lights go all ethereal. 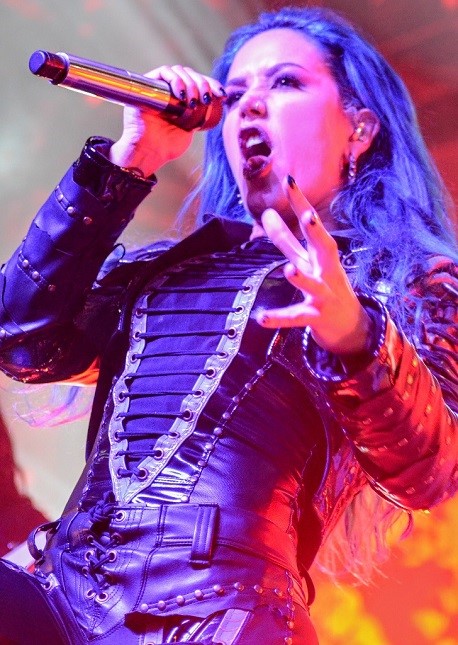 The beginning of the end, "Nemesis" finale sees Amott with wielding his axe vertically, as White-Gluz pinwheels her blue mane. The rest of the time, she's barking out the lyrics, stage front, one foot planted on the wedge monitors/riser. As it morphs into instrumental rendition of "Fields Of Desolation" she says her goodbyes. Like a star going supernova, the pace quickens and the two guitarists blaze away, center stage, under white spotlight, before suddenly falling silent, in total darkness.

Black stage, with shadowy silhouettes, as pre-recorded snippets of Ava Maria and the Star Spangled Banner are intertwined with ominous spoken voiceovers. It builds to crescendo, as Inferno enters his drum fortified bunker and BANG, Behemoth are off. Or more precisely, mouthpiece/guitarist Nergal is unleashed. Jerky, start-stop motions as he spasmodically angles from side to side and jumps atop the stage front shadowboxes, the hooded, but sleeveless cowl attired Pole looks to slay another audience, gaining a few new converts, in the process. When he sings, Nergal is behind the twin cobra-headed dais. Orange lights practically flash in time with opening "Ora Pro Nobis Lucifer", the gravel-throated waif imploring the crowd to sing along to the "Thine is the kingdom And the power Thine is the kingdom And the glory, Forever" chorus. Talk about your role reversal! Say what you will about the words, this is a powerhouse of a presentation and the song is catchy as Hell (pun intended). It ends with spotlighted Orion and second guitarist Seth, sharing a center stage fist bump.

Icy blue lighting for "Wolves Ov Siberia", which is augmented by four stage front smoke plumes repeatedly erupt, as a blitzkrieg of strobes also commences. Driven along with Inferno's thunderous cannonade, the guitar wielding, tongue waggling Satanist is on his knees, pressing close to his congregation across the barricade. The slow, grinding "Ov Fire and the Void" adds tons more smoke to the proceedings, the crimson shades and prodigious mist making the stage look like the environs of Hell. Blue was the optical choice for the just released "Evoe", a short, albeit fast/heavy number with catchy stop-start chorus. Seth and Inferno, alone onstage, begin "Bartzabel". Shortly thereafter, Nergal appears in ornate mitre headdress. 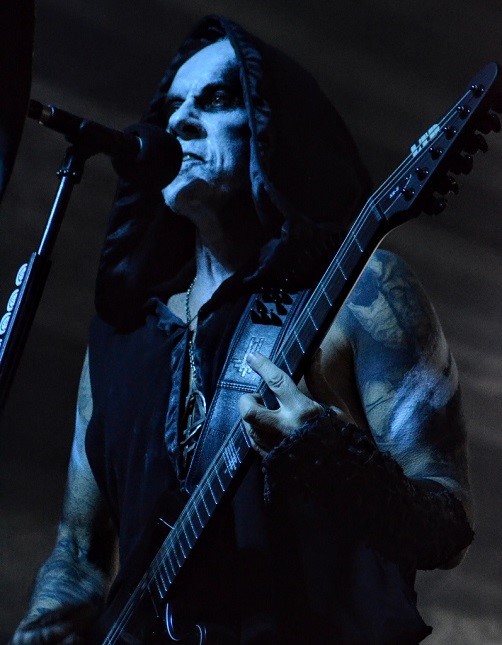 Good to see some older numbers still present and/or returning to the set. Case in point, the speedster "Christians To The Lions" (absent since '15). Speaking of absentees, the band departed the smoky, red drenched stage, ominous mood music piped in, in their place, until a white spot highlights Inferno and his kit. He hammers out the beat as Nergal emerges and (like the Roman emperor, in the Coliseum) turns a thumb down on the Christians.

"Conquer All" was dedicated "to all of you who survived the last two years of bullshit (the pandemic). Stay strong, stay healthy and as free as you can in this world that is trying to enslave us." Nergal also called out the Russian attack on Ukraine. Riled up, the staccato riffs were like a clarion call to start a riot (which thankfully didn't happen), but the crowd began to chant along, as cymbals crash and the stage fills (once again) with theatrical smog. Like a thunderstorm, the stage turns steel gray, dark blue/purple, with crashes of white lightning. The twin guitars trade licks center stage. Still one of my favorite cuts. The same audio that accompanies the studio version introduces: “Slaves Shall Serve", the tow guitarist stand face-to-face, center stage, as it begins. The chest wall takes a beating on this one, from the relentlessly pummeling emanating from the speakers. Initially, it's Orion, who bellows the titular phrase, then augmented by Nergal, the two in unison. Newly issued single "Ov My Herculean Exile" creeps by, shrouded in blue, as Nergal atop a shadowbox, thrusts his fist overhead. Those in the audience follow suit. Only in the final third does the primer cord detonate (only briefly), Nergal playing his guitar vertically.

Proper set closer "Chant for Eschaton 2000" launches its trademark buzz, with Nergal working himself into a series of rhythmic gyrations that see blood spilling from his mouth. Orion and Seth have been similarly "afflicted," as have some in the front row, red-flecked victims of collateral damage. Looking like the set of some Hammer Horror film, the otherwise empty stage is red, as lights flicker and smoke streams in, from the wings, an infernal pre-recorded noise hums. Eventually, the full band returns, Nergal now sporting a complete, floor-length cloak atop his typical wardrobe. The droning hum of "O Father O Satan O Sun!" is punctuated by yellows, whites and reds. Eventually, the music fades out, as do the lights, ultimately leaving a blackened, noise-less stage, devoid of lifeforms. Show over, the end. Is this theatrical finale Nergal's metaphor for life? Enjoyable, regardless of final outcome. Words to live by.