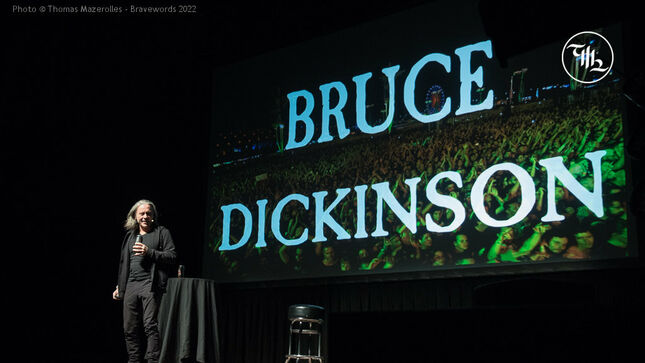 Bruce Dickinson has many different talents, maybe as many as the ridiculous trousers he performed in over the years. One of those talent is being a very charismatic person on stage with Iron Maiden. Bruce has been known to rant during concerts and perhaps this might have paved the way to his spoken words tour.

After many dates in the United States, Bruce finally made his way to the MTelus in Montreal on March 23 in front of a cheering Montreal crowd. With only a screen in the background, Bruce started the evening in French before switching to his native tongue. As once can expect, this is not a music concert, but a time for Bruce to talk about anything and everything from his life.

As always, Bruce is full of energy and the evening started with his birth, or as he says, the first time he defied authority. We can rapidly see that Bruce is not only a great signer, but also a great storyteller. The imagery is non-stop, subjects quickly intertwine with one another and keep the crowd’s attention. As evolution goes, the topics move from birth to schooling, more precisely English public school, or what we call private school, and more challenges with authority.

Unfortunately, Bruce had issues with his laser pointer and being the professional that he is, he discarded it and used his fingers to point on the pictures shown on the projector. A second laser pointer was brought to him, which again did not work, making Bruce wonder if people here had invented invisible laser pointers!

At this point, Bruce surprised everyone by saying he never wanted to be a signer and did his best to be rejected by the school choir. When hearing Deep Purple’s In Rock for the first time, he wanted to be a drummer and ended up playing the bongos. But fate had other plans for him and, as the story goes, Let It Be by The Beatles was instrumental in his journey to become a signer.

As we all know, Bruce is very knowledgeable of local history and culture so those elements are included in his show and I’m sure that those are swapped for other local references depending on where he is performing.

From here on out, Bruce takes the crowd thought a series of funny anecdotes and personal stories from Samson, Iron Maiden, Rock In Rio, Queen Elizabeth II, airplanes, podcast and how he was so jealous of Rob Halford’s shoes that he ended up buying a pair of black shoes himself in Los Angeles, only to realize they were a replica of Michael Jackson’s Thriller shoes, but no one ever noticed… until now.

One of his most funny parts was when he related how difficult it was talking with Nicko McBrain about a song's verse and chorus, to which he concluded that was why God invented bass players.

As light-hearted as this evening was, the subject turned into a more serious one when Bruce talked about his cancer, his chemotherapy and radiation treatments. But he still found a way to make fun of his beard and how he lost chunks of it at the most inconvenient times.

This two-hour monologue brought us to the intermission where Bruce made way for Iron Maiden’s music video for the song “The Writing On The Wall”. After the short break, Bruce came back to answer different questions about Iron Maiden, airplanes and, of course, his next solo album. He mentioned that he was actually going to continue to work on it after his spoken words tour and that it will include a different version of the song “If Eternity Should Fail”.

If you did not know already, Bruce Dickinson is more than just a signer, and fans got to experience his passion for telling great stories and that he can make fun of everything, even himself.