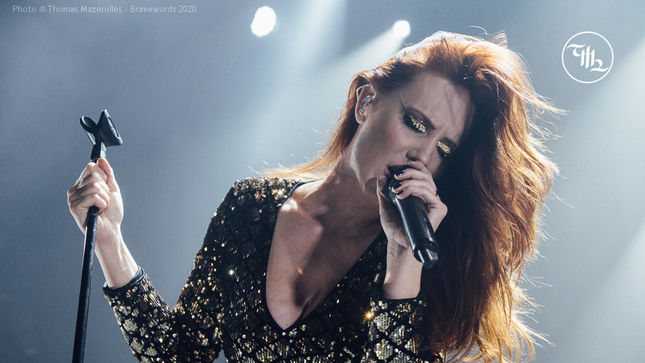 Only a few days in the New Year and Epica was in one of their favourite cities in North America to celebrate Design Your Universe’s tenth anniversary at the Corona Theatre. For the occasion, the band invited their friends from Blackguard and The Agonist to party with them.

The evening is sold out so it is not surprising to see many fans cheer Blackguard when they come one stage. Returning to the music scene after a hiatus of six years, Paul Ablaze is in great shape and his voice is very powerful. As usual, he constantly interacts with the crowd and gets them going right out of the gates. Everyone in the band had a huge smile on their faces and used every inch that is available to them. This also coincides with the digital release of their third album entitled Storm. It is only normal that the band played a few songs from it and the crowd reacted really well to them. Time will tell if this was enough to get the band back together or not.

The Agonist was up next and the crowd gave them a warm welcome as the songs “In Vertigo” and “Panophobia” are played in succession. Fans push each other and pump their fists to the rhythm of the music. The musicians are very dynamic on stage and are very happy to play in their hometown once again. The songs mainly came from their most recent album Orphans, but they also played songs from Prisoners and Eye Of Providence. As usual, Vicky Psarakis is full of energy and is constantly on the move. Another great show from them and the crowd loved every second of it.

It was now time to see Epica and the fans were chanting their name in order to get the show started as soon as possible. The band members arrive on stage one at a time while the song Samadhi is played as an introduction. As soon as Simone Simmons appears to sing “Resign To Surrender”, the crowd goes ballistic. This is quickly followed by “Unleashed”, “Martyr Of The Free Word”, “Our Destiny” and “Kingdom Of Heaven”, all songs from the Design Your Universe album. Fans pushed each other as others banged their head to the rhythm of the music. There is a real love affair between the fans of Montreal and Epica and this show is another proof of this. Even if the musicians have barely landed in North America, they are full of energy and use the stage to the fullest. The band played the song “In All Conscience” from the album The Quantum Enigma before diving right back into the main album with the songs “The Price Of Freedom”, “Burn To A Cinder” and “Tides Of Time”. This last one showcased the angelic and powerful voice of Simone. Coen Janssen used his curved keyboard on many occasions, giving him more freedom to move to the front of the stage to interact with the crowd. The band finished their set with power as they played fan favourites “The Obsessive Devotion”, “Cry For The Moon” and “Design Your Universe”. The band offered the songs “Sancta Terra” and “Beyond The Matrix” to the fans and they responded with an energetic circle pit. Coen grabbed his curvy keyboard once again and went into the pit as the fans ran circles around him. He was then lifted over the crowd so he could surf back to the stage. The fans also answered Mark Jansen’s call to make a wall of death during “Consign To Oblivion”, the last song of the night.

As expected, the night was a huge success and even if the fans were mainly there to see Epica, they also showed a lot of love to the opening bands. It was not surprising to see that Epic had another full house concert in Montreal in and it was a great way to kick-start the year!