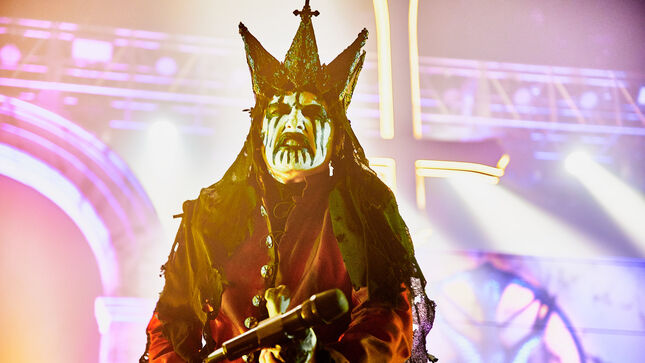 It's unjust and unbelievable that a band as legendary and influential as Mercyful Fate was relegated to playing in tiny clubs when I first saw them in the mid ‘90s. Ravenous as the crowds were, they weren't exactly as expansive as the eminent Danes deserved, and I vividly remember my younger, wistful, and beardless self-wondering if Mercyful, Maiden, and their ilk would ever return to the arenas and stadiums where they rightly belonged.

You already know where that story goes. Within a few short years, the legends of ‘70s and ‘80s metal were performing in front of some of the largest audiences of their careers, while more cult acts like King Diamond had stepped back into mid-sized theaters that allowed greater flexibility with sets and stagecraft. It came as no surprise when Mercyful finally reformed after a two-decade hiatus and hit Psycho Las Vegas and a string of European festivals. But what did surprise us was that their 2022 tour of the United States and Canada would begin at the fucking Factory. Formerly The Bomb Factory, it is a not exactly tiny venue where I'd previously photographed Nightwish and where Judas freaking Priest have performed. It's pretty clear that Mercyful Fate have finally reclaimed their proper place in the touring circuit. 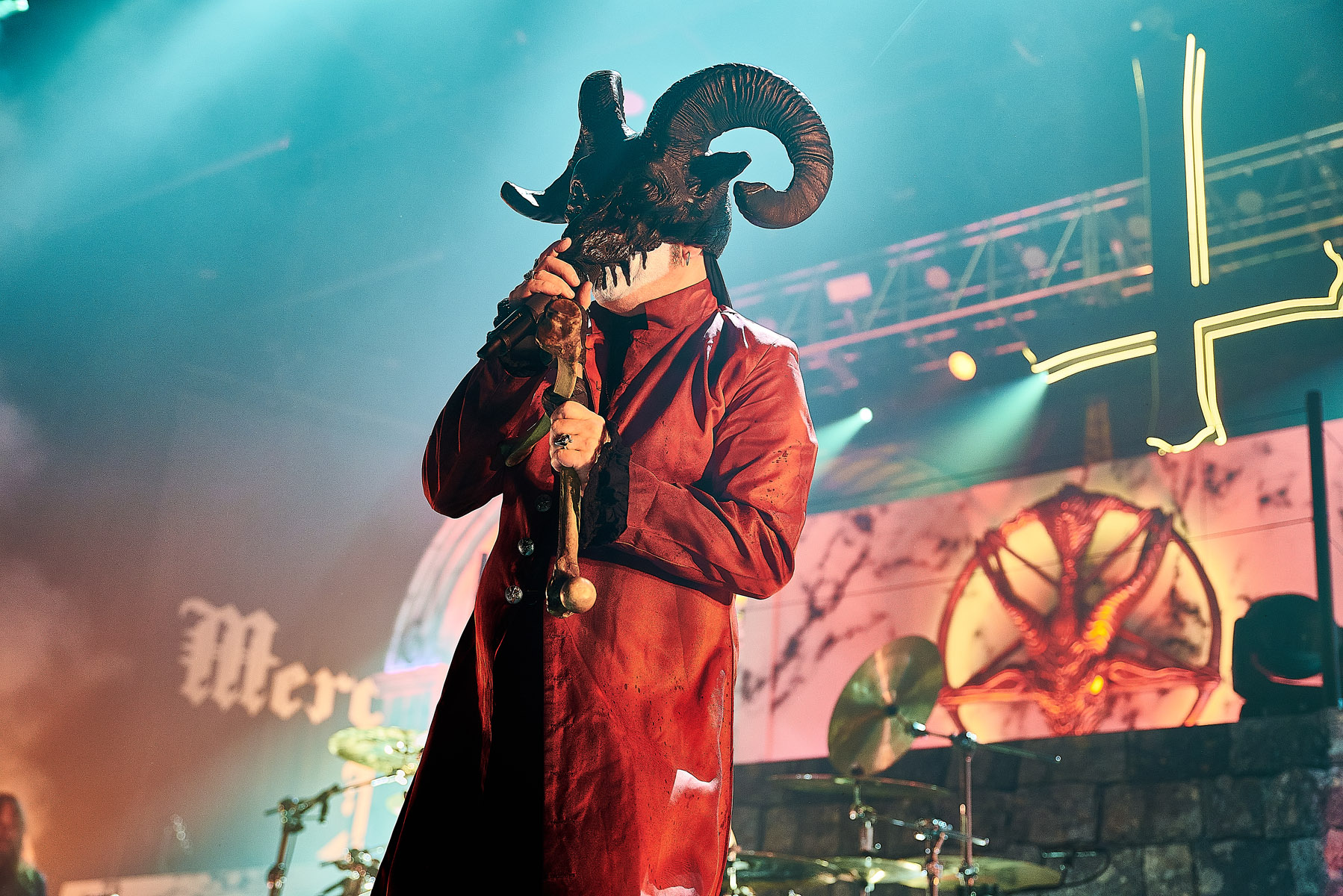 It always struck me as odd that bands often kick off or wrap up a tour in a city that's not their own, but it makes absolute sense that Mercyful would begin their first US tour since like 2000 in King Diamond's adopted hometown of Dallas, TX. A hotbed of rock and metal since well before we were born – perhaps you've heard of native son Meat Loaf, or possibly Pantera – the Dallas show was attended by at least a few luminaries, such as John Perez of Solitude Aeturnus. More importantly, it was attended by roughly 2700 fans, masses ahead of the audiences of three to five hundred of which I'd been a part in my youth.

Sadly, a hotel mishap prevented us from catching openers Midnight, and a lengthy line at will call robbed me of my opportunity to photograph Kreator. Our deepest concern regarding Kreator as a support band is that they are possibly the greatest live act in metal. Our first encounter with them was during the Enemy of God tour in the mid 2000s, and quite frankly we were floored at how much fury erupted from the tiny stage at The Sanctuary, near San Antonio College. I'm convinced that if the potency that comes from a Kreator set could be harnessed, the band's native Germany would finally be energy independent. 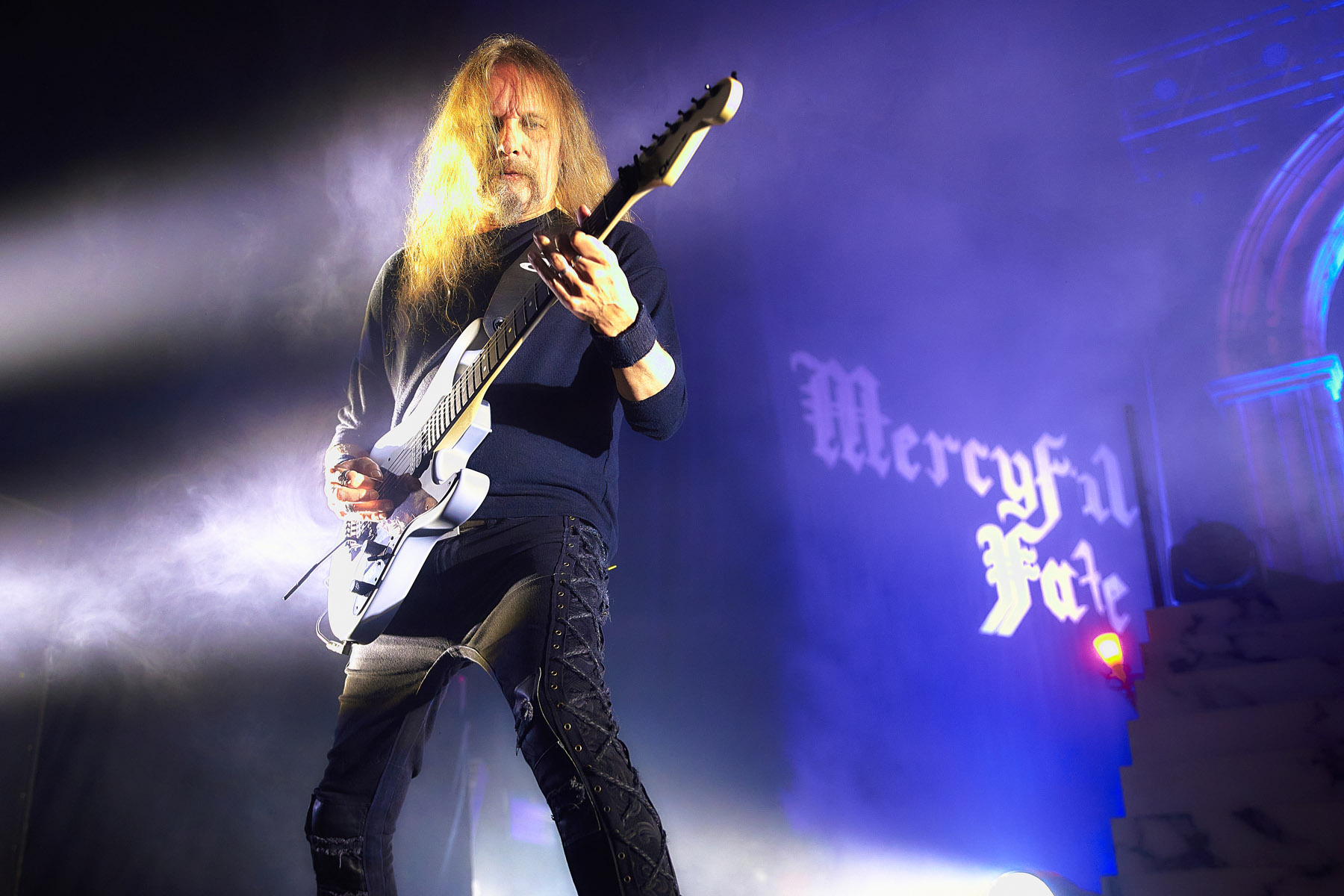 This ain't Kreator's first rodeo. Consummate professionals, Mille and crew know that their role as an opener on this tour is to warm up the crowd for the headliner, and their ability to will themselves into a more subtle but by no means lesser force speaks volumes about the reverence they hold for The Mighty King. Kreator paid homage to both the headliners and the crowd over a nine-song set that included “Violent Revolution,” “Flag Of Hate,” the aforementioned “Enemy Of God,” and closed with the Teutonic metal classic “Pleasure To Kill.” Having seen them destroy an audience, it was a little disorienting to see Kreator firing at most cylinders rather than all of them, but seeing their humility on display was both heartwarming and reassuring.

If there was any doubt as to who the crowd was here to see, the answer could be found at the merch booth. In all our years of concertgoing, not once have we seen a merch line stretch from the venue entrance all the way to the back of crowd and never get any shorter than that. Several hundred people were queued up to grab the swag Mercyful offered, from two new t-shirt designs to the commemorative Melissa and Don't Break The Oath shirts, or the keychains, hoodies, or bandannas. Even for massive bands like Iron Maiden, Scorpions, or KISS, merch lines tend to cool off during sets; this did not happen even once this October night, though from the vantage point of the photopit it looked like the courageous vendors were getting at least a slight respite as the massive Mercyful Fate banner was hoisted upon the stage, a beacon to the many fanatics who'd traveled from both near and far to witness the re-coronation of the Wicked King. 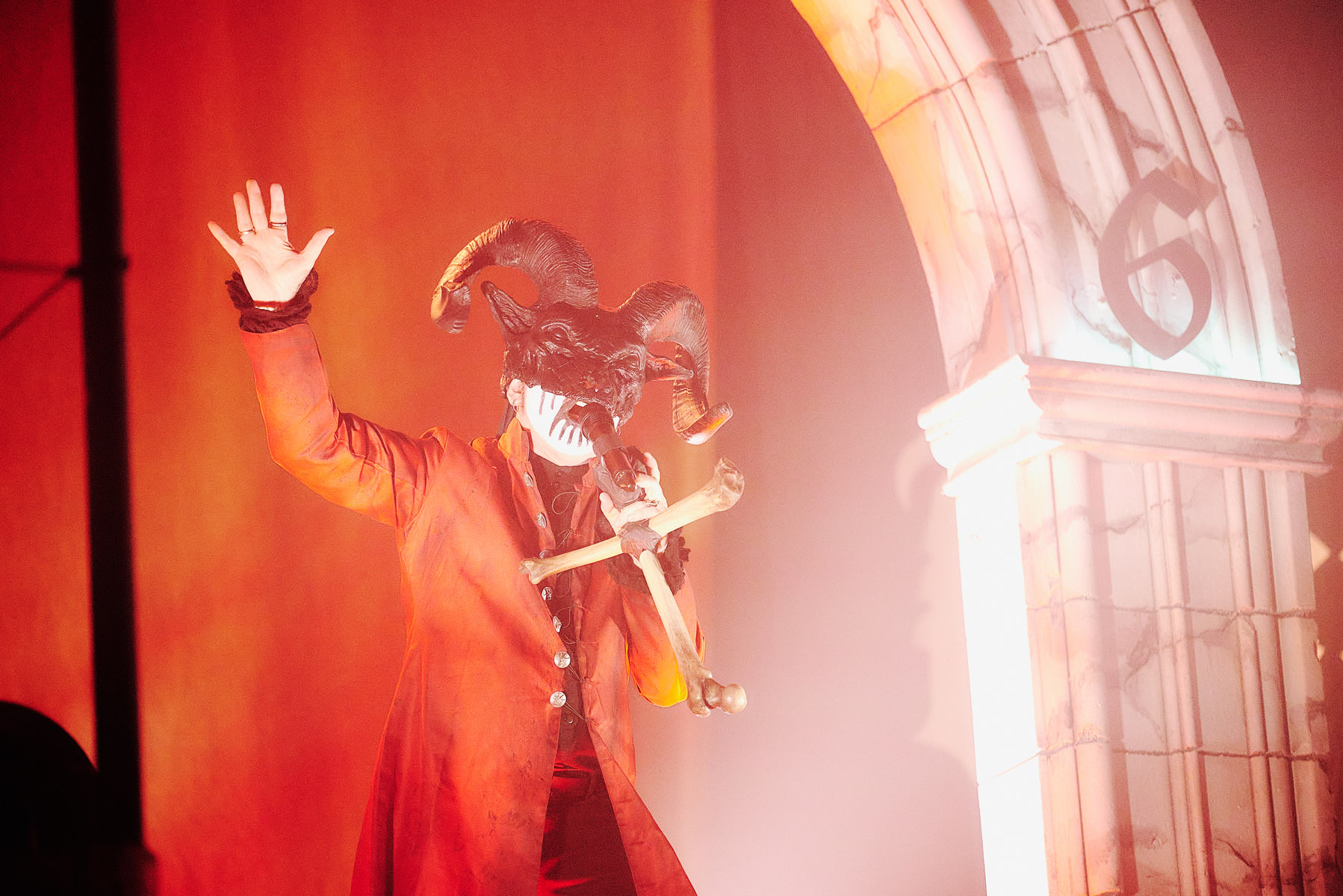 The moment the needle dropped on the intro to “The Oath” was the moment for which the crowd had reserved all its energy. The curtain dropping and the stage coming awash in light revealed a set not unlike the one King Diamond has used on recent solo tours: a balcony perched above drummer Bjarne T. Holm's kit adorned by an enormous goat-crowned pentagram acted as a sinister keystone to the almost Byzantine archways that capped the steps upon which guitarists Hank Shermann & Mike Wead, stand-in bassist Becky Baldwin, and the Mighty King himself lurked. The set, festooned by the lighted outline of an imposing inverted cross, felt like the evil twin of the Hagia Sophia, and was possibly inspired by the photographs on the rear cover of Don't Break The Oath. If the crowd came to celebrate black masses, they'd arrived at the right place.

The Profane Preacher greeted his flock with his signature banshee wail, defiantly declaring “I deny Jesus Christ, the deceiver.” I learned at some point along my path that despite whatever I may have believed as a kid, King Diamond is in fact not a five hundred year old vampire. But that chilling, ageless scream momentarily made me question that again. For a guy who has shrieked his way across an illustrious, five-decade career, and who'd undergone grueling treatment for a herniated disc a while back, The King's voice is in remarkably good shape. 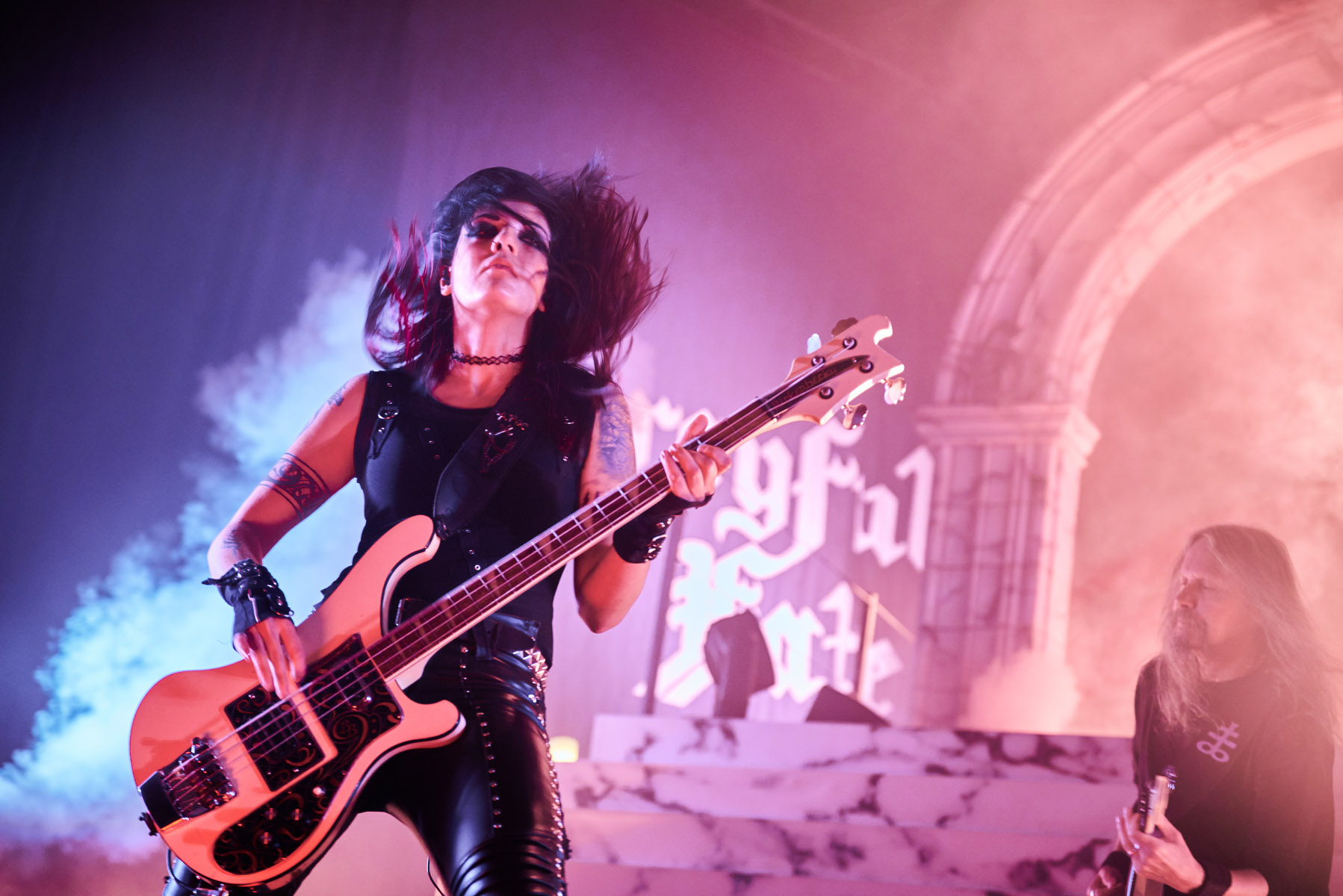 The breaks near the end of “The Oath” allowed Ms Baldwin (Hands Off Gretel, Fury) a brief chance to both show off and to honor original bassist Timi Hansen, who was battling cancer at the time Mercyful Fate reformed; lamentably, he died shortly thereafter. Presumably because Arch Enemy has taken off in the intervening years, Sharlee D'Angelo's role has been filled by none other than the inimitable Joey Vera of Armored Saint and Fates Warning, though commitments with the former have kept him from joining the Danes on this trek. The Birmingham-bred Baldwin handled the bass duties admirably, nailing each part every time and prowling the stage during this, her inaugural performance with Mercyful, as if she'd been touring with them for years. Fitting, considering she's literally from the very city where heavy metal itself was born.

Mercyful then tore into another classic, the oft-overlooked “A Corpse Without Soul,” before performing that new song you've probably seen on the YouTubes, “The Jackal Of Salzburg,” which went over nearly as well as all those well-loved heretical serenades of decades past. In fact, this was the only song in Mercyful's set that didn't predate their early ‘90s reunion. As essential as those first two albums and that debut EP were to the evolution of metal, ‘90s Mercyful made some damn fine records that we love to this day, and our only complaint about this otherwise fanfuckingtastic concert that it was too damn short to include such cheerful ditties as “Witch's Dance,” “Holy Water,” or that other, later ode to Melissa. 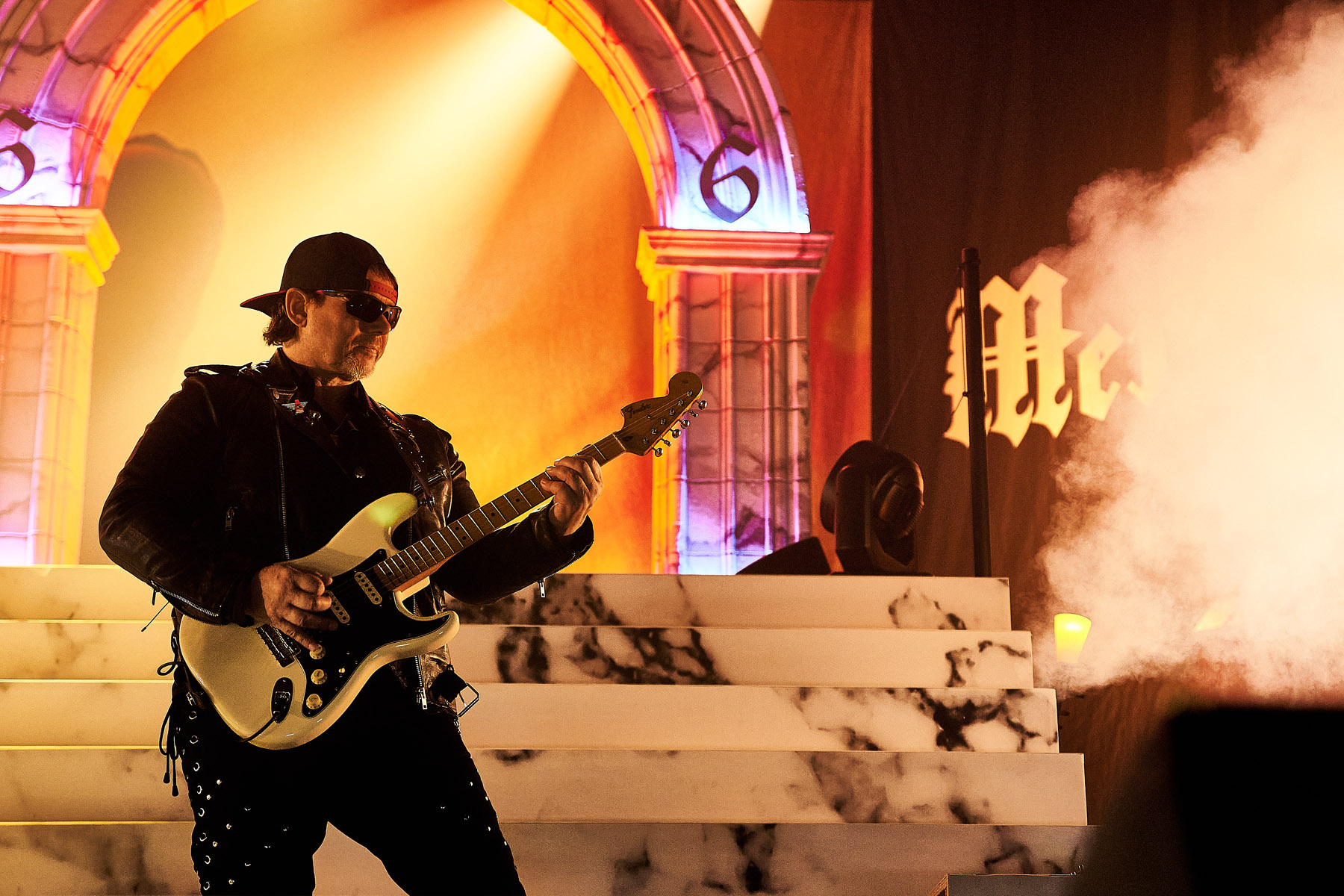 Speaking of “Melissa,” His Heinous fleetingly revealed his sweeter, more human side at the end of that epic cut when he dedicated that song to one Melissa Thompson, wife of King Diamond drummer Matt Thompson, who were both directly in front of the stage because of course they were.

As fond as we both are of bands who rearrange or improvise over their classics (late Portnoy-era Dream Theater were especially good at this), we absolutely acknowledge that playing songs by the book is usually the appropriate thing to do. You know what we could do without though? Backing tracks. And you know how heavily Mercyful Fate relied on backing tracks during this set? Apart from that eerie intro to the opening song, not at fucking all. Even the bells heard during the interlude to “A Dangerous Meeting” were deliberately not piped in, and their absence reminded us that this is what metal was meant to be: unforgiving, complex, and 100% live. Despite the killer set and light design, Mercyful Fate's mission statement remains unchanged from the club days of both their infancy and that rough stretch in the ‘90s while much of their fanbase was too busy raising their kids and being responsible adults to go see a corpsepainted undead dude throw the metal horns and sing about the devil. And that mission statement is to kick their audience's ass with little more than their passion for performing these sick, sick songs of theirs. 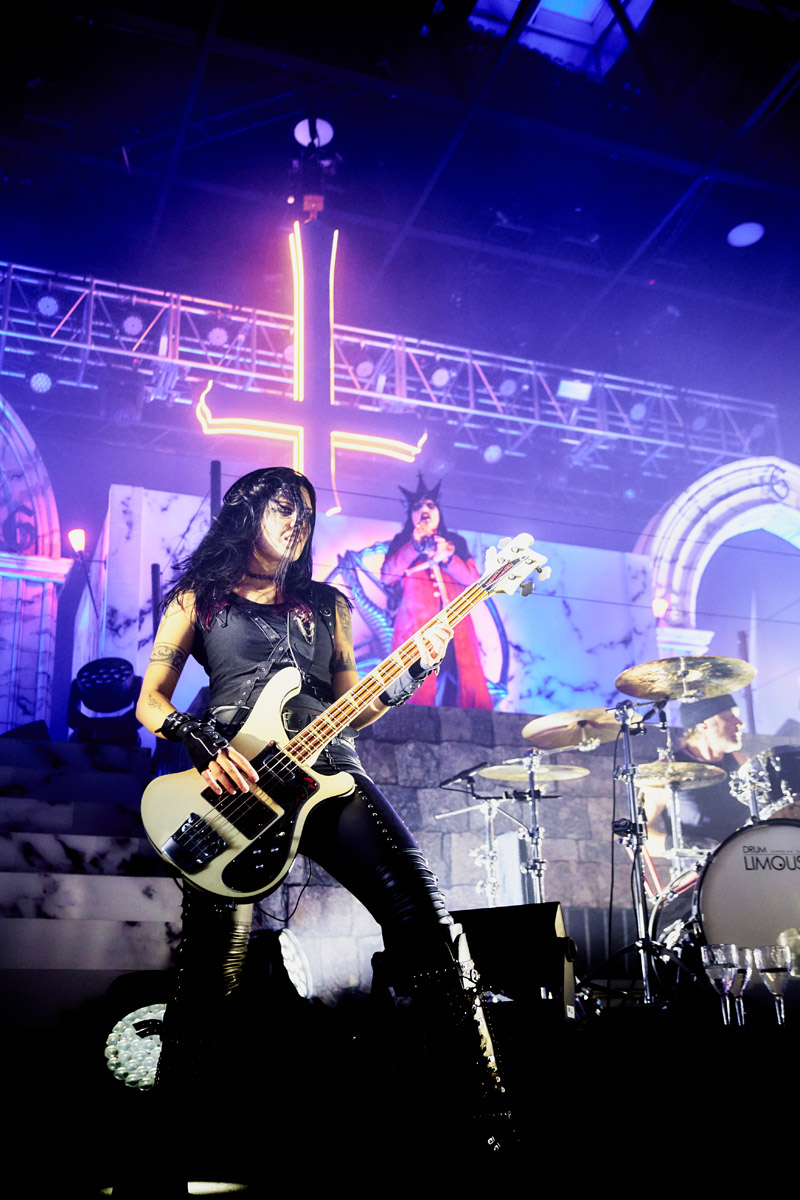 In fact, it's reasonable to suspect that those same parents who had to skip out on those ‘90s shows have not only returned, but have brought their kids with them: the crowd included nearly equal parts old farts, early 40s fuckers like ourselves, and a surprising number of youngsters who might have been in pre-school the last time Mercyful Fate toured the United States. Nowhere was this clearer than at the barricade, where kids barely old enough to (legally) drink writhed, moshed, and carried crowd surfers alongside folks who were nearing retirement. And that's one of the magical things about music: regardless of genre, it has the power to unite people of all walks of life. Age, background, and such matter not at all. There is only music, and the release it offers.

The set concluded with another lengthy composition: “Satan's Fall.” And the crowd didn't exactly disperse when that exhausting number ended. Chants of “Mercyful! Mercyful! Mercyful!” filled the venue while the still tightly-packed floor convulsed with the excitement of witnessing the return of the King and his merry band of Mercyfuls. King Diamond clearly feels most at home on that brilliantly designed set, and all these decades into his career, he remains one of the most charismatic performers ever to wave the metal flag. His and his bandmates' ardor and theatrics took what could have been a mere rock concert and turned it into a nefarious nocturne, an immersive experience that clearly left fans yearning for more. Disappointment was only felt when the house lights went up and there were no signs of the magic returning with an eagerly anticipated encore. And that merch line still stretched into the auditorium. 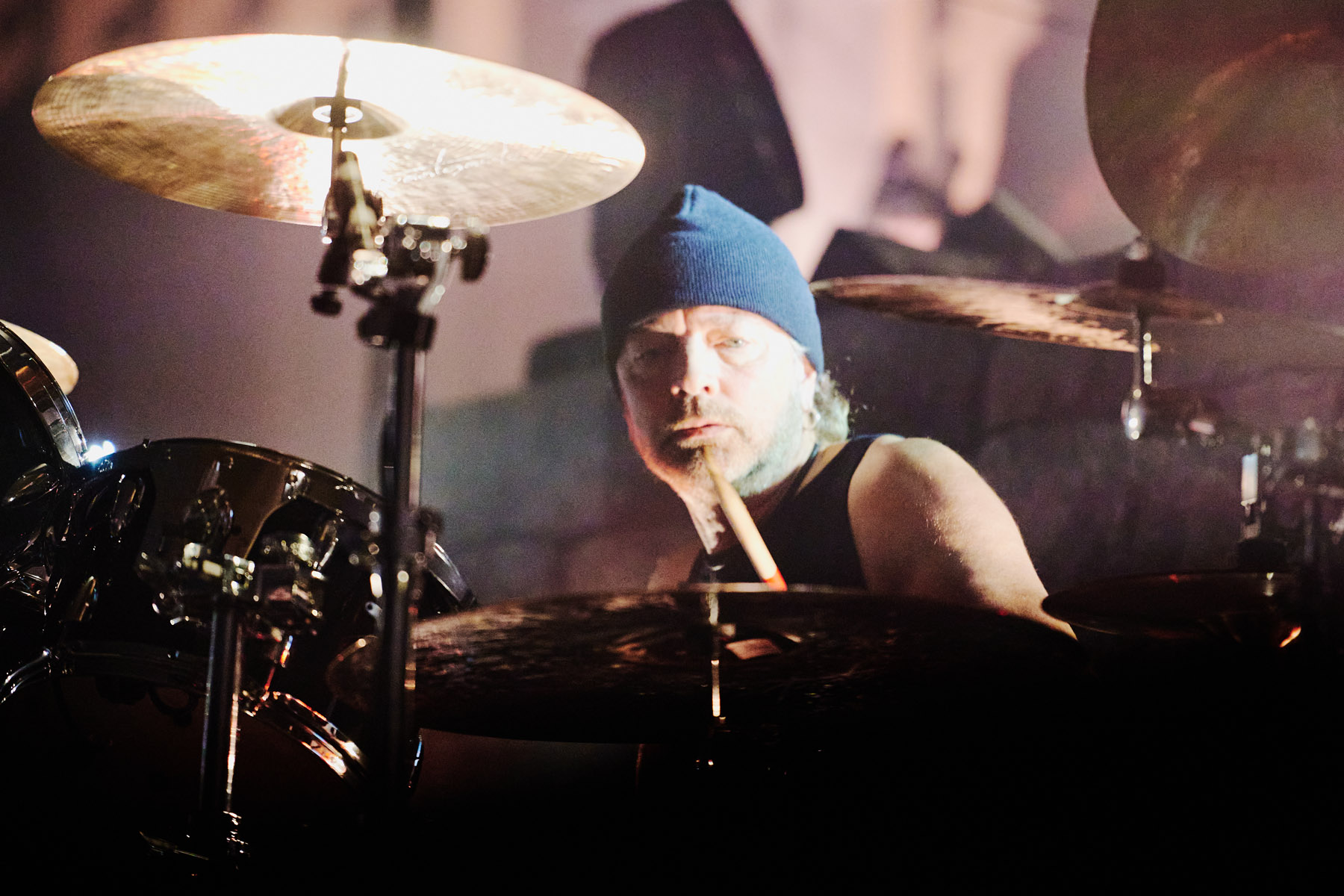 There was no lack of excitement from that sea of black t-shirts while waiting for the curtains to fall and for those familiar sounds that has been so sorely missed by so many. The evening boasted a venue simply alive with stellar songs and a palpable energy that made these well-rounded musicians more than just performers. This was a homecoming with longtime friends and chosen family, both celebrating and commemorating the hunger and youthfulness these songs embody. Yeah, this was more than just a concert. It was a communion, possibly an unholy one, and one plenty worthy of the 273 miles we traveled just to be a part of this much-anticipated reanimation.

The King has returned. Long live the King. 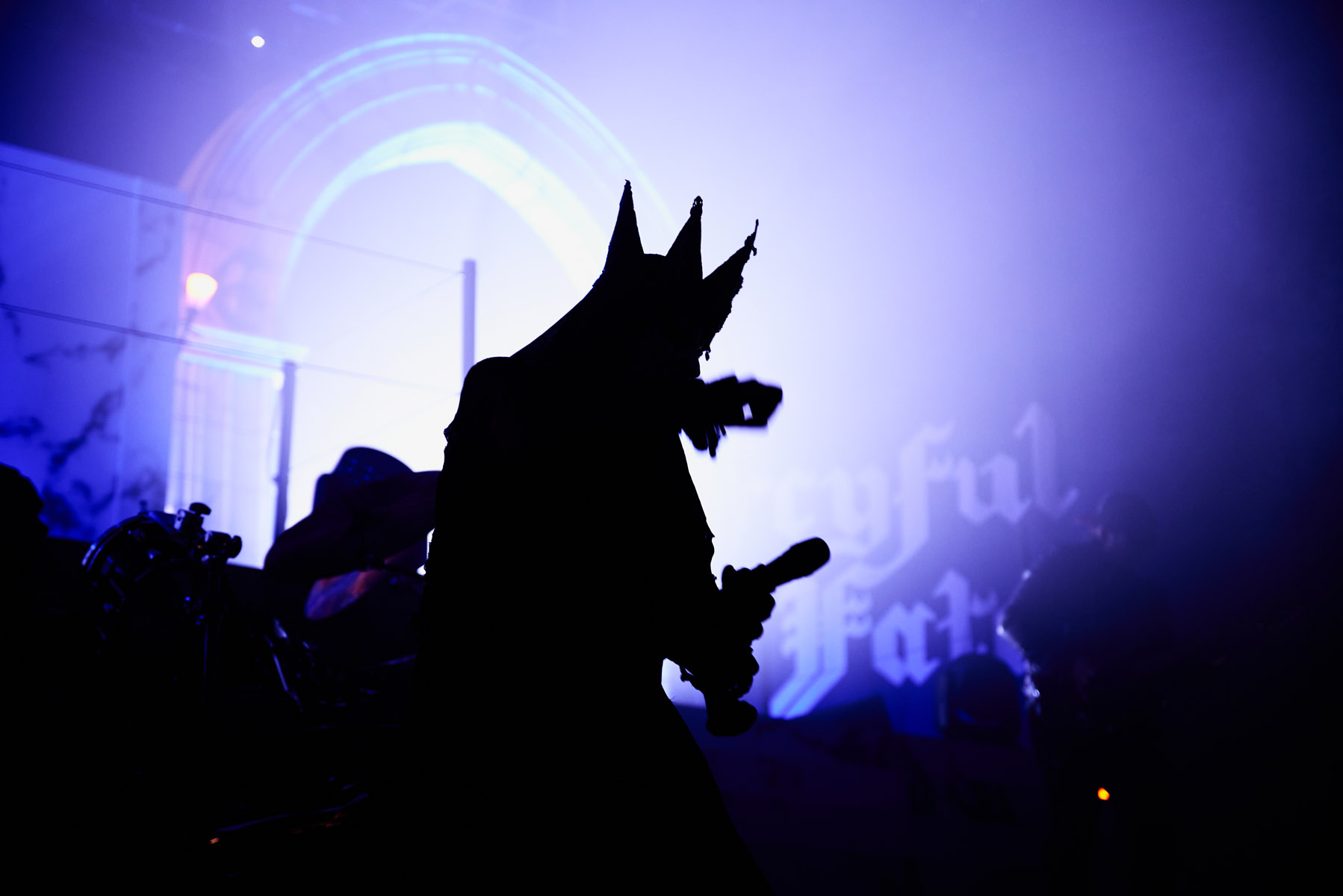