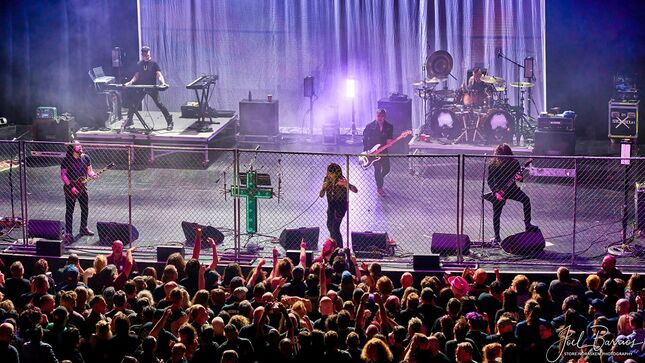 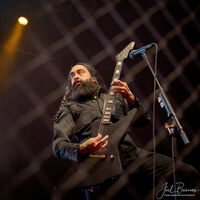 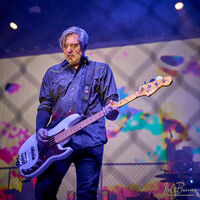 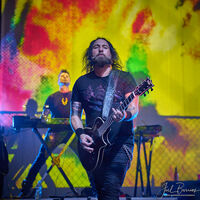 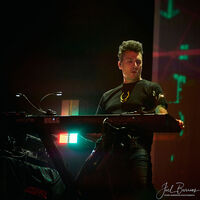 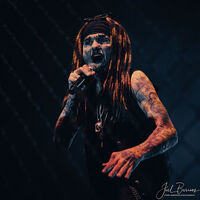 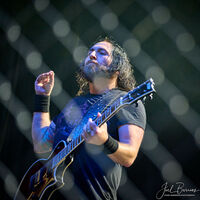 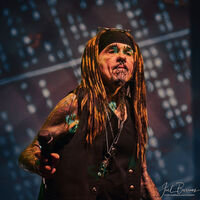 There would be few names more apt for Ministry’s conquest over North America than the Industrial Strength Tour. Few things could be more steadfast than Al Jourgensen, longtime front-man for Ministry and a pioneer of industrial metal with more than four decades of experience under his belt. After being postponed for almost two years, the Industrial Strength Tour celebrates the 30-year anniversary of Ministry’s landmark The Mind Is A Terrible Thing To Taste as well as the recent release of their 15th studio album Moral Hygiene.

The Industrial Strength Tour arrived at Orlando’s Hard Rock Live on March 23, almost halfway through the 22-date trek. Ministry are far from the only veterans on the bill: the industrial metallers are joined by the Melvins and Corrosion of Conformity. With each band having found their roots in the early 1980s, the tour promised decades of combined experience on stage and countless hits to draw from. Even more impressively, each band boasts at least one founding member to keep the spirit alive - a spirit that still burns bright even after more than two years off the road.

Corrosion of Conformity were tasked with opening the night, and the heavy metal outfit dug into their 1990’s catalog to build their set-list. With their song selection drawing primarily from hit albums “Deliverance” and “Wiseblood,” the sludge metal veterans were full of fervor as they shredded their way through fan favorites at full volume. “Vote With a Bullet” and “Clean My Wounds” brought fists into the air as Pepper Keenan commanded control over both vocals and guitar, and founding member and lead guitarist Woody Weatherman laid down the familiar riffs with precision. The rhythm section held their own through “Paranoid Opioid,” with the band’s newest addition, John Green, pounding away on the drums with exuberant glee. Corrosion of Conformity brought enthusiasm in spades, and performed with notable consistency as they celebrated their return to the stage. Nostalgia and a persistent youthful vigor combined to keep Corrosion of Conformity a fresh and exciting act to see live. 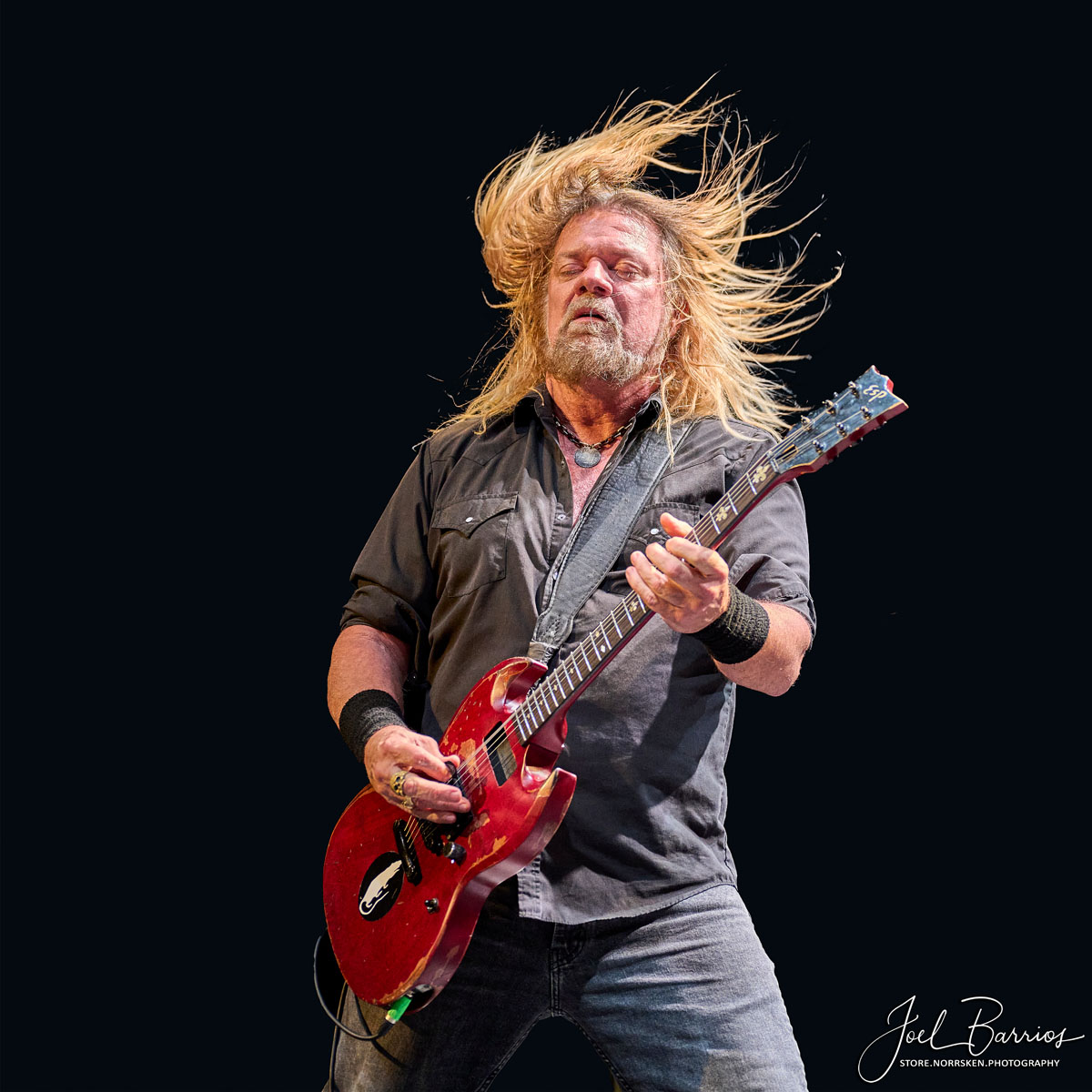 Melvins followed shortly afterward, wasting no time in bringing their heavy fare to the masses. The set-list pulled from across the band’s sweeping history, masterfully dancing between different eras and inspirations with striking fluency. This was a powerful delivery from start to end, with the group tearing through twelve songs in an unstoppable firestorm. Front-man Buzz Osbourne prowled the stage as he incited the crowd, hardly pausing for a moment in nearly an hour of music, and excitedly delivering their newest song “Never Say You’re Sorry.” The rousing closer and all-time favorite “The Bit” brought the already rowdy crowd to a near frenzy. The setlist was perfectly crafted, packing the end with hard-hitters including “Hooch” and “Honey Bucket,” which allowed Osborne to share his obvious passion with all in attendance. 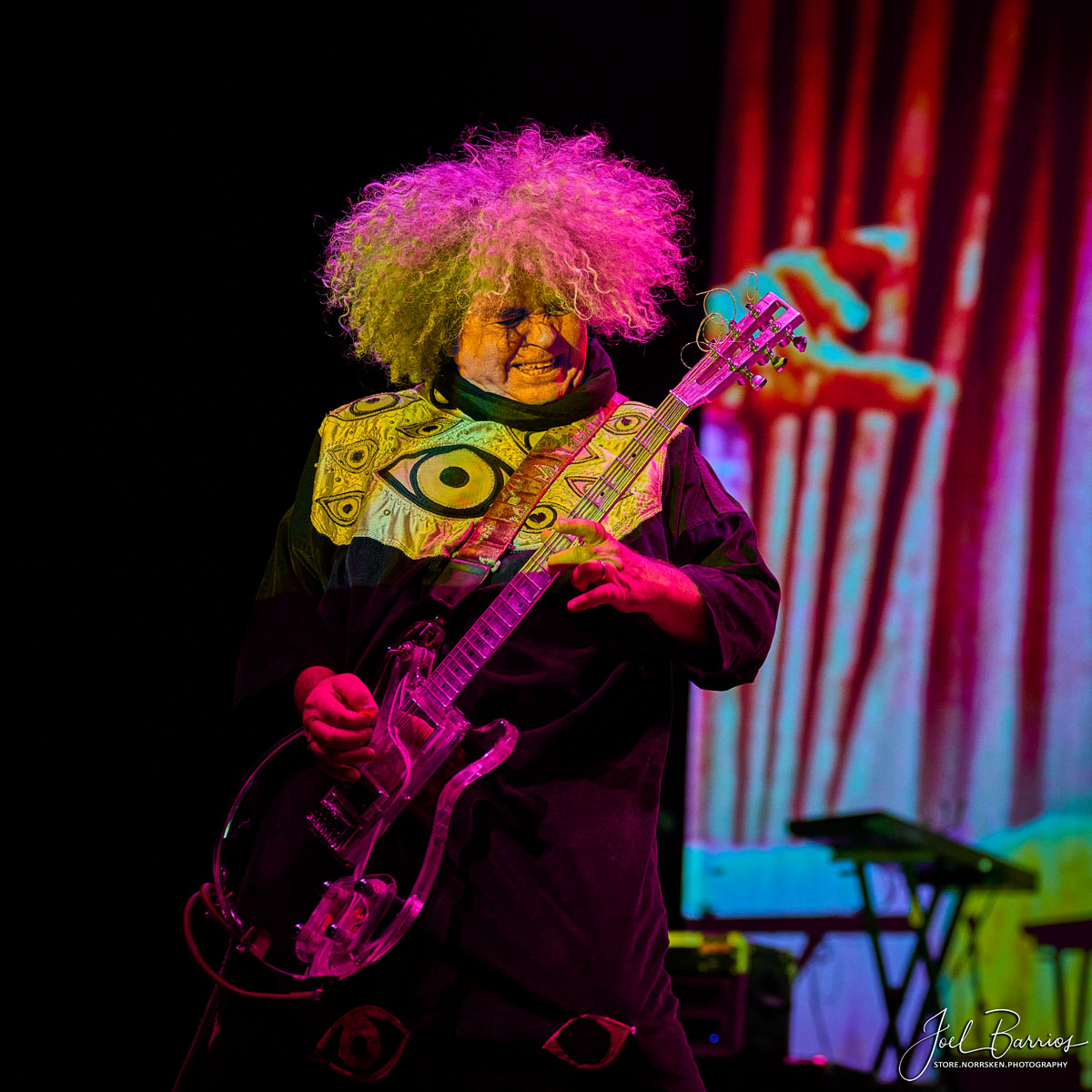 Finally, it was time for Ministry to take their long-anticipated headlining spot. This performance was more than just an album anniversary bash, but a celebration of industrial and heavy metal that spanned multiple cover songs and Jourgensen’s other projects. Everything on stage was crafted to match the sonic atmosphere of the hard-hitting “Moral Hygiene” while highlighting Ministry’s early roots. This included the band performing most of the set behind a chain-link fence that ran across the entire stage - in a clear homage to the stage setup from back in the days where they were touring to promote “The Mind Is a Terrible Thing to Taste”, bright strobing lights, and a psychedelic backdrop that brought dizzying imagery to accompany each track. 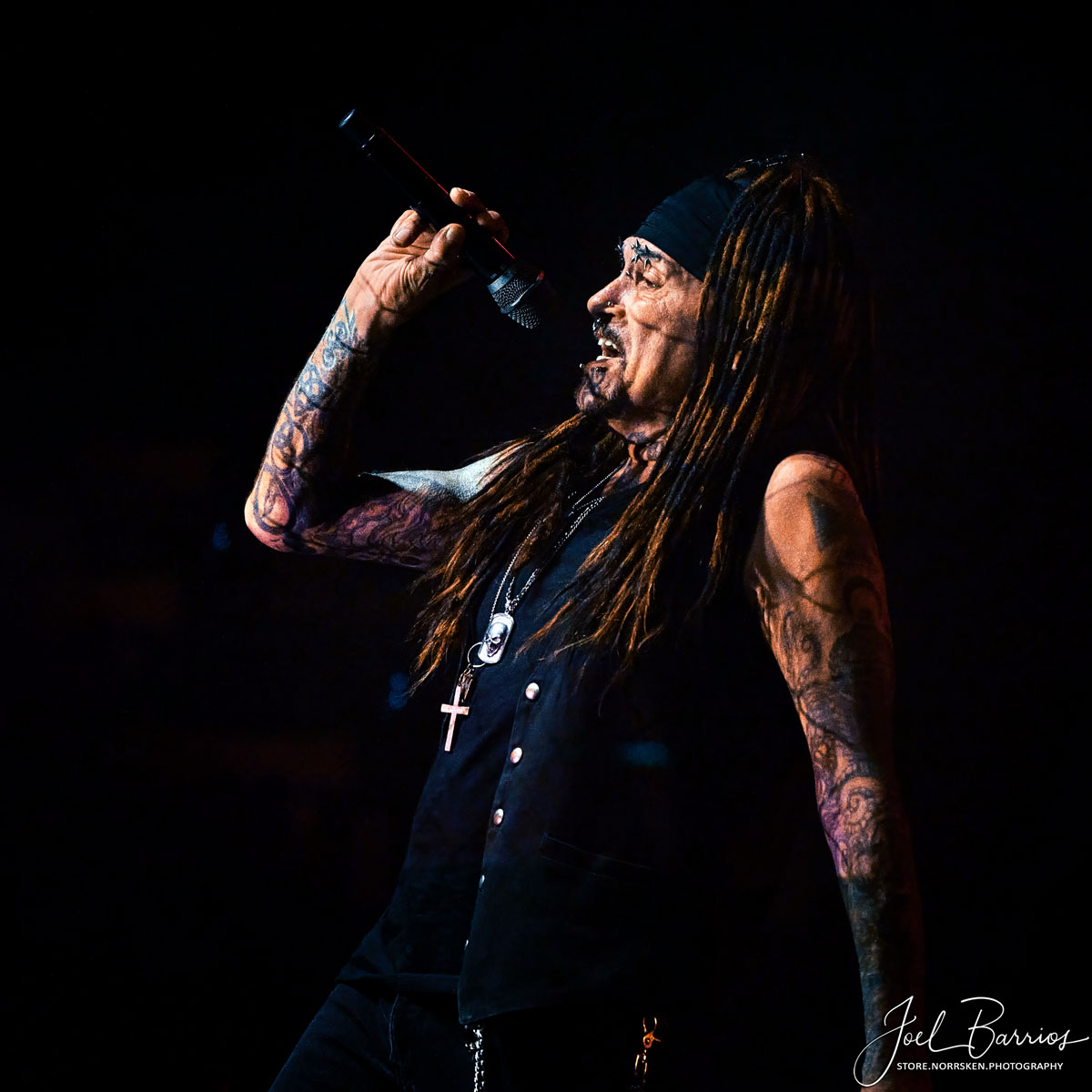 Jourgensen wasted no time before diving into the meat of the show, kicking off with “Breathe” before leading into “The Missing,” each step confident as he stalked his way across the stage. The expressiveness of the music was paired with his emotive vocals, his face embodying both rage and passion as the choruses swept the crowd off their feet. The rest of Ministry’s lineup is newer to the fold, and keyboard player John Bechdel takes the title of longest tenured after Jourgensen himself, but their on-stage chemistry was unmatched. Guitarists Cesar Soto and Monte Pittman kept themselves active as they engaged with the audience despite the barrier between them. 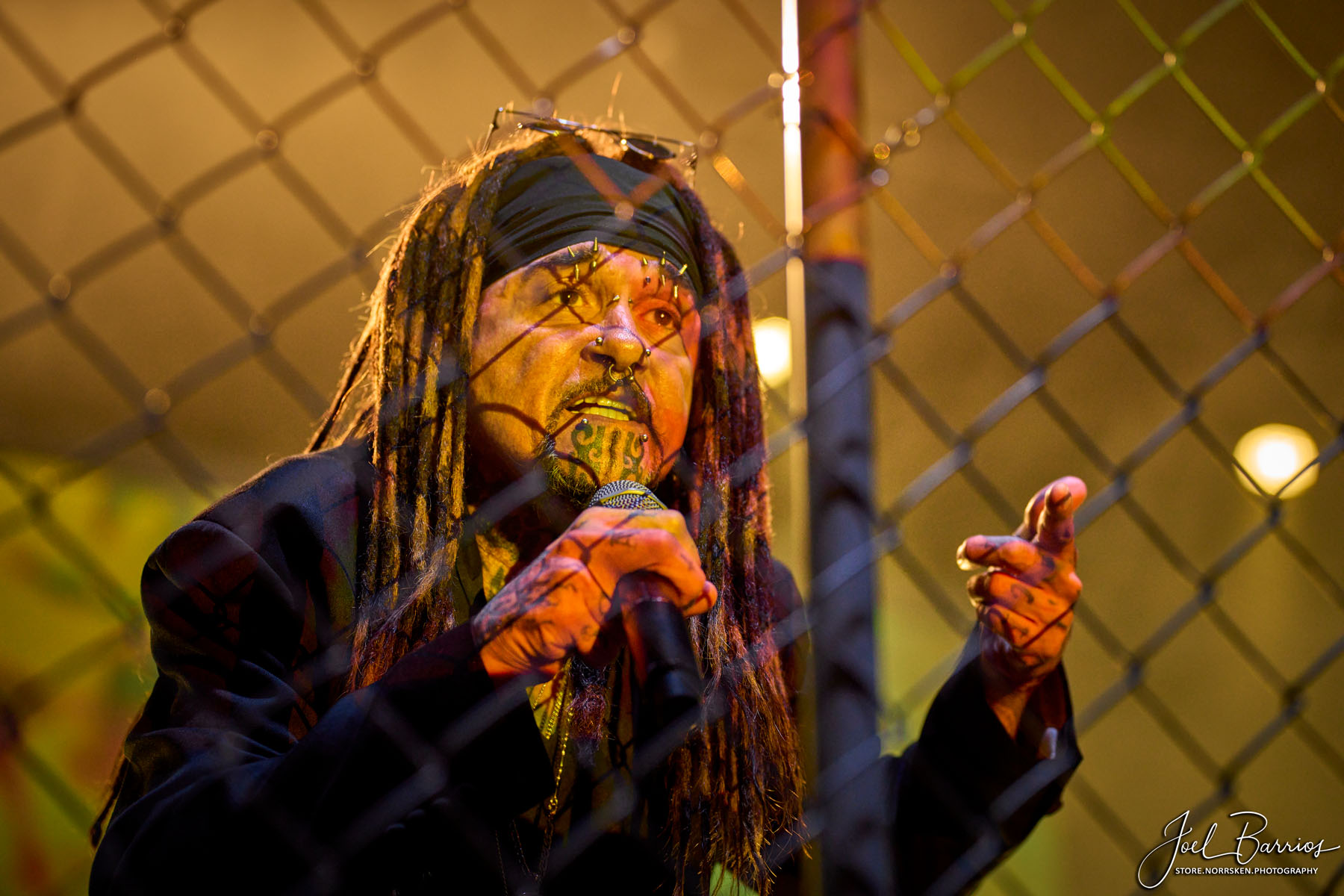 Shortly after diving into classics from The Mind Is A Terrible Thing To Taste, Jourgensen showed off his own taste of nostalgia with two covers of his side project Pailhead, performing both “Don't Stand in Line” and “Man Should Surrender.” A certain highlight of the stellar presentation came by the hand of their provocative - and a personal favorite of mine - "Alert Level," a song initially released  on April 2020 which Al used as the vessel to voice his justified concerns regarding the American landscape at the time, with epidemics, environmental crises, political corruption and one of the biggest elections of our lifetime. Also noteworthy were the wondrous renditions of Black Sabbath’s “Supernaut” and Iggy and The Stooges’ “Search And Destroy” as the night’s closing hymn. Such variety elevated the performance beyond just Ministry’s own impact, as it uplifted sounds of past and present for a performance that was as revitalizing as it was engaging. This was a show as unique as its front-man, shrugging off many conventions in favor of a performance that truly fit Ministry’s legacy. After more than two years of delay in bringing the vision to life, the hunger for this tour was evident, and made this unforgettable headlining set even stronger.