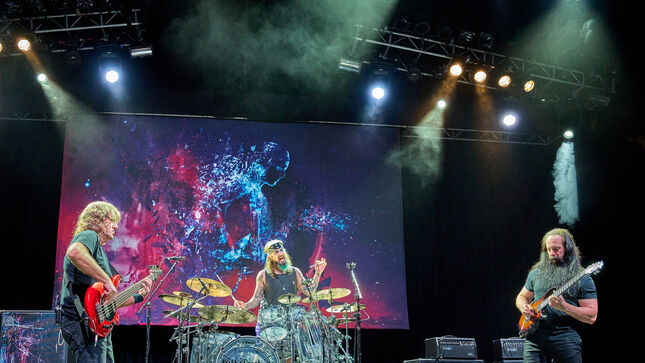 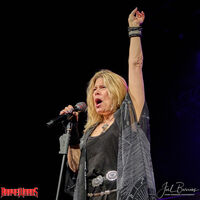 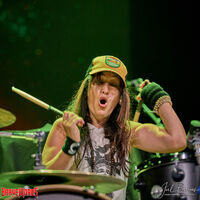 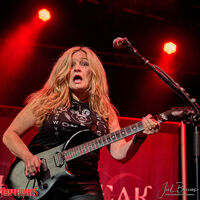 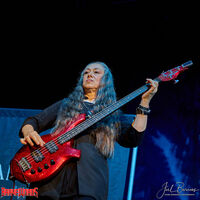 The power trio seems a throwback to a bygone age in this era of larger ensembles with no shortage of backing tracks. Such noteworthy acts from days past such as Cream, ZZ Top, The Jimi Hendrix Experience and the maestros of progressive rock themselves Rush had a unique way of making the most basic of instrumentations seem larger than life, even in the midst of throngs packed into the largest arenas. But this phenomenon has not yet become a lost art if Dream Theater’s six-string shredder John Petrucci has anything to say on the matter, and with a pair of highly consequential players in his former band-mate Mike Portnoy wailing away at the drum kit and virtuoso bassist Dave LaRue of Neo-classical metal titan Maestro Alex Gregory and Steve Morse Band fame, it’s a safe bet that what will be brought to the table will be nothing if not formidable, as those in attendance at the Hard Rock Live in Orlando, Florida on October 23rd, 2022 were to find out. 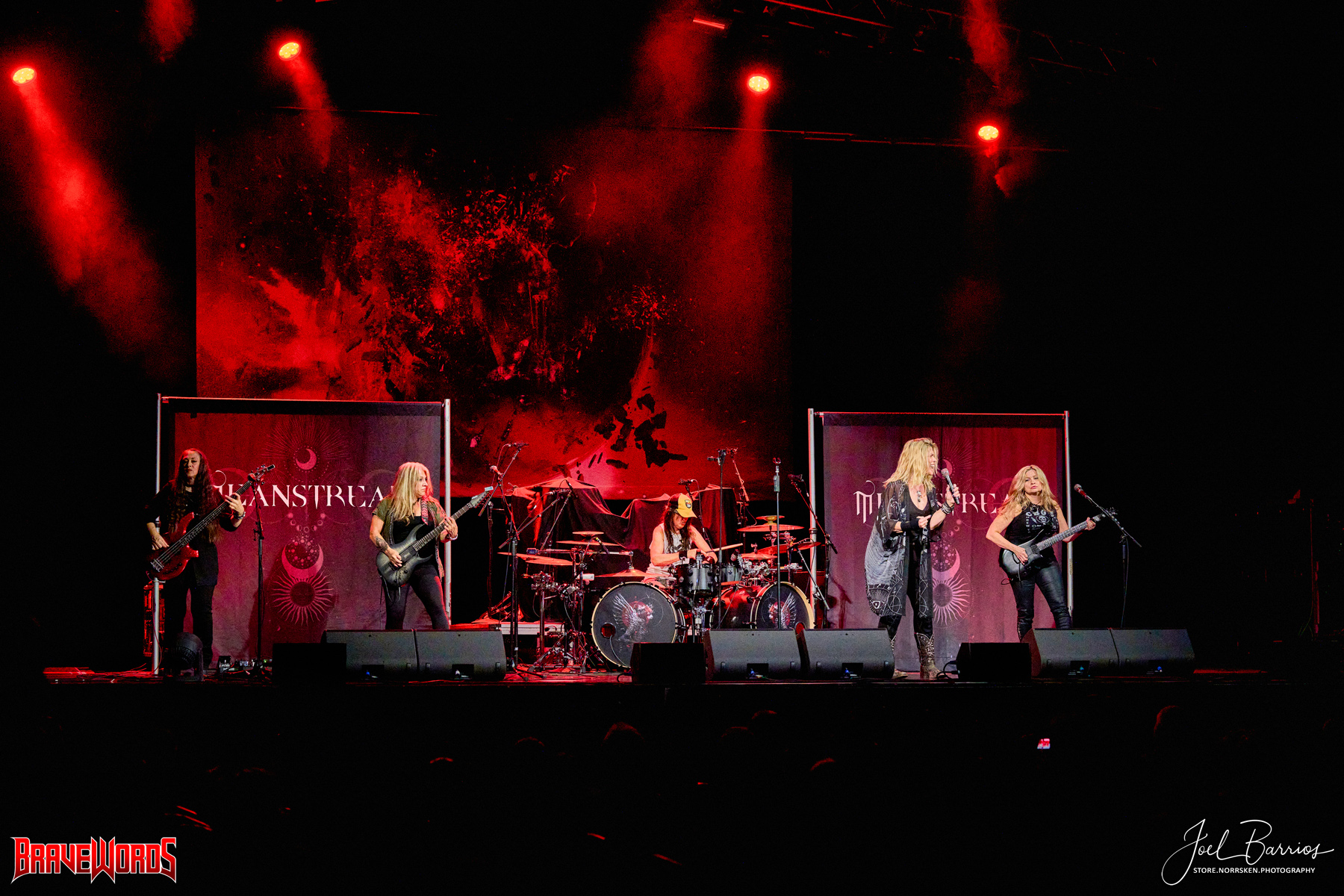 The event that was to unfold was a battle against the odds, not simply due to the rare niche of instrumental progressive metal being the main event, but also due to a Disney-sponsored Halloween Horrors Night event taking place right next to the venue. Nevertheless, a combination of skill and zeal would carry the evening, beginning with the opening set of all-women thrash metal quintet and opener Meanstreak. Though including the wives of three Dream Theater members in guitarists Marlene Portnoy and Rena Sands, along with bassist Martens Myung respectively, the stylistic contrast between the rugged, mid-80s flash meshed with late 80s nuanced New York-styled metallic aggression and what would follow could not have been more pronounced. Though they played to an audience that was only at half capacity likely due to the aforementioned coinciding event, the combined flair and raw energy of this fold led by the soaring shouts of vocalist Bettina France and bolstered by the thunderous ruckus provided by drummer Yael Rallis elicited a roaring response, be it via the compact and nimble riff machine “Roadkill”, the longer and more technically involved “Congregation”, or deeper cuts from the demos following 1988 LP such as “Rubberneck” and “The Dark Gift”. 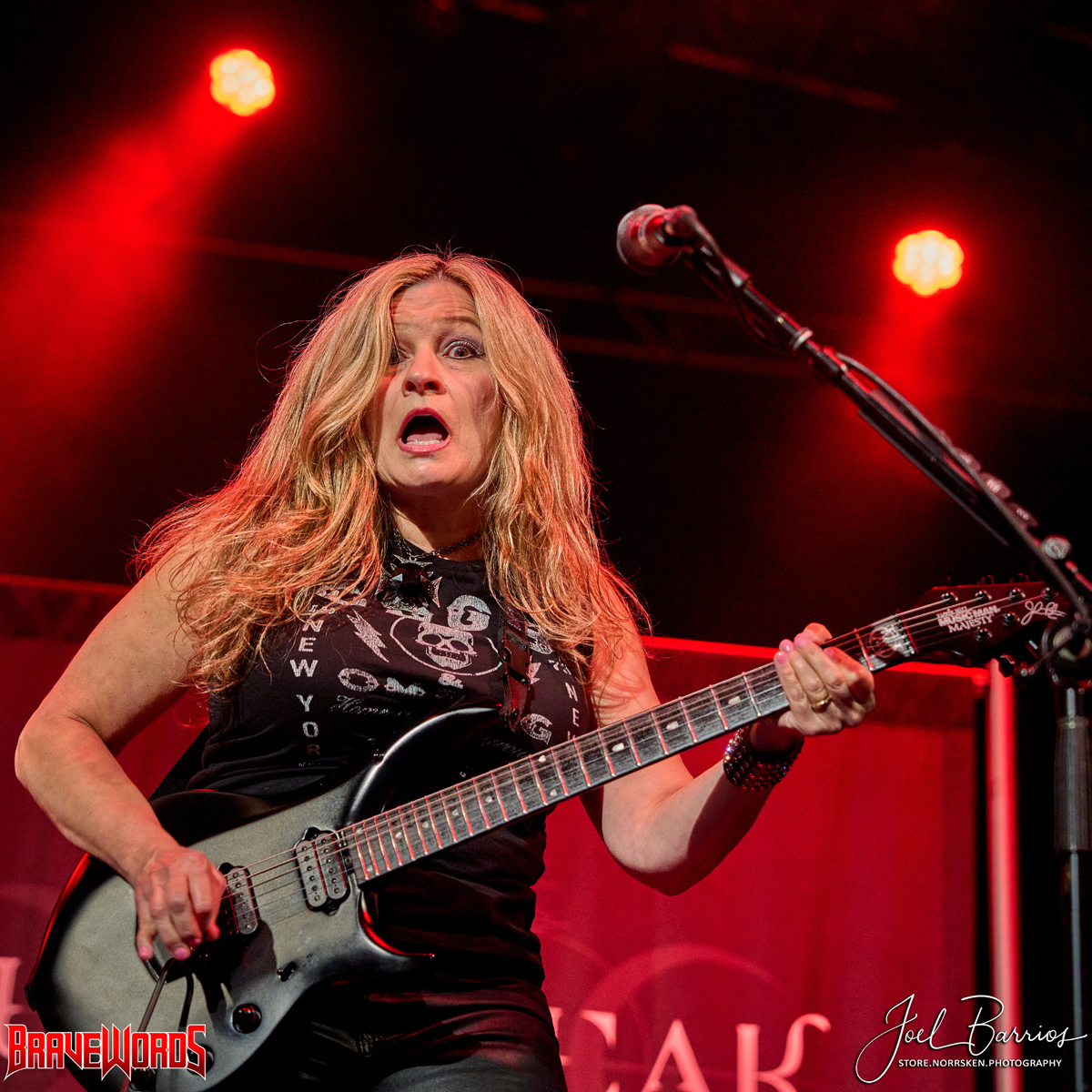 It would be at around 9:15 PM that John Petrucci’s fold would take over the stage, and though still battling the circumstances of playing on a Sunday night in the midst of a massive holiday event just outside the theater, the venue’s attendance would swell closer to total capacity with all standing at attention. Elation would be the best word to describe the response that was attained as Petrucci led his small ensemble through a varied repertoire of material, focused largely on his 2020 sophomore solo LP Terminal Velocity, which had yet to receive promotion via a tour due to the Covid lockdowns, but a healthy showing from the 2005 debut Suspended Animation would also find its way into the set. The guitar work would prove a perfect balance of highly impressive technical gymnastics and a necessary counterbalance of singing melodic themes and accessible riff work, all the while Petrucci would largely stand a stoic figure fully focused on his instrument when not conversing with the crowd between songs. His approach to crowd engagement would prove heartfelt and good humored, with him asking in response to the highly animated crowd response whether it was actually a Sunday night, and also providing highly complementary introductions with his two instrumentalist cohorts, reminiscing on how it was starting Dream Theater with Portnoy so many years ago and how great it was to be back on stage with him after 12 years, and also giving LaRue a warm homecoming to his native Orlando, Florida by referring to him as his favorite bassist. 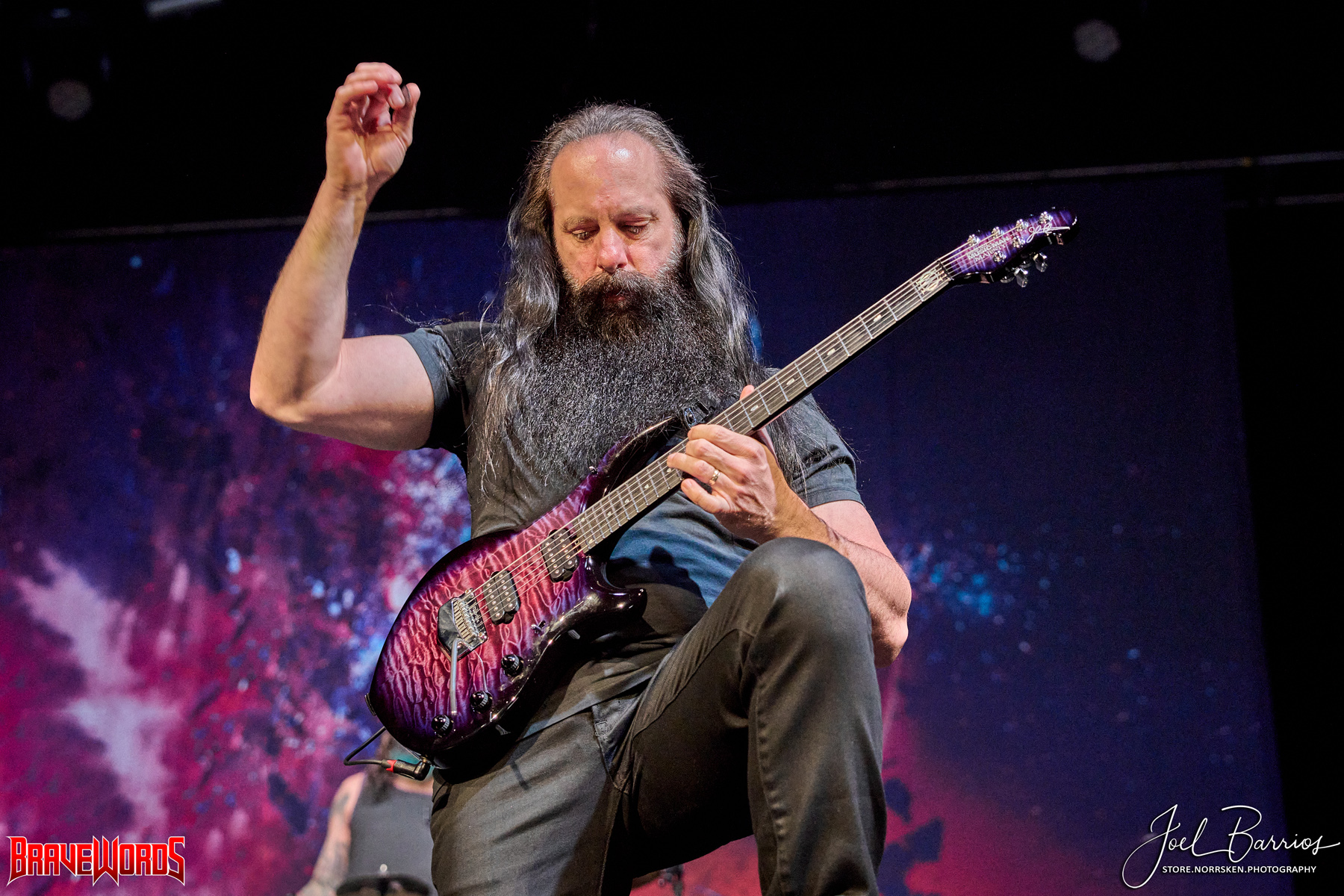 Perhaps the only element that could match the masterful performances put on by these three masters of the craft was the rich degree of stylistic diversity that the material itself brought to the table, underscoring Petrucci’s prowess as a songwriter as well as a virtuoso guitarist. The opening one-two punch of new album title anthem “Terminal Velocity” and upbeat jam “The Happy Song” set the mood on a decidedly light-hearted, almost whimsical note that meshed flashy lead guitar high-jinks with an AOR-like template reminiscent of the more joyous odes heard out of the likes of Joe Satriani. The mood would take on a more mystical and abstract character with the rhythmically mixed and darker timbres of punchy cruiser from 2005 “Jaws Of Life” and fast-paced metallic shred machine from 2020 “The Oddfather”. Other eclectic twists to the formula would come in the forms of the bluesy fanfare of “Snake In My Boot”, the spacey vibes and rocking grooves of “Tunnel Vision” and the dank, low-tone metallic chugging with a plethora of shifts in feel “Temple Of Circadia”, all of them occasions for this trio of technicians to showcase their abilities while maintaining a sense of artistic cohesion and measured progression. 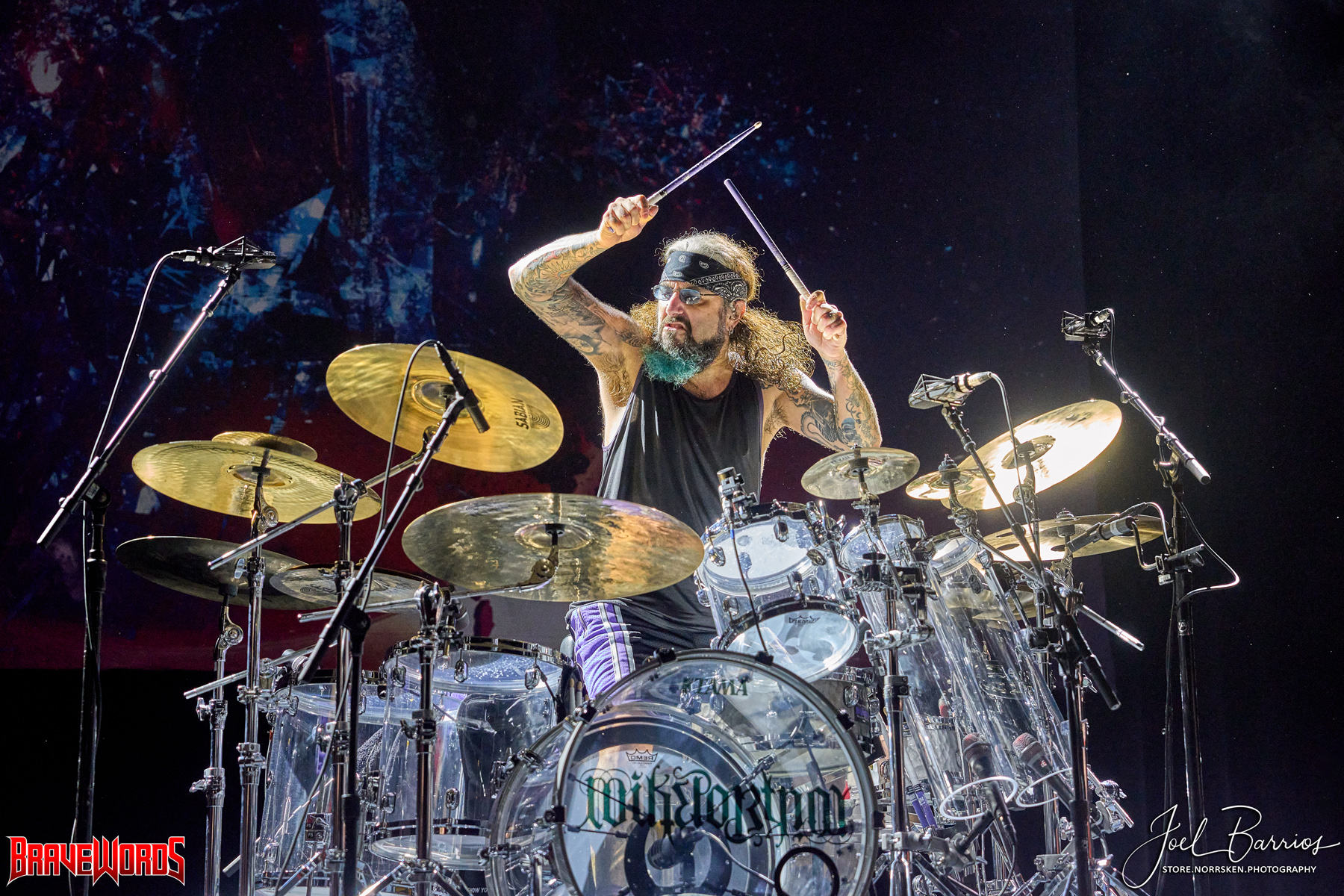 Though arguably one of the most unorthodox presentations to ever grace the stage in the midst of Disney World, there was not a solitary soul in attendance that didn’t come away with a sense of euphoria for what had taken place. The aggressive bluster of Meanstreak coupled with the cerebral and varied pursuits of John Petrucci’s solo project may well have been an exercise in pure opposites stylistically speaking, but they would prove equals in the level of inspirational energy and poise that they brought to the event. Though this 28-date North American tour has been in full swing since early October and will continue on until November 17th, a case could be made that this show would be among the highlight performances, if only for the fact that it was against the least favorable circumstances that could have come to pass. It’s a testament to the fact that though modern technology has afforded bands the ability to synthesize an entire Wagnerian orchestra to complement their performances, an organic display by musicians with the right balance of ability and drive can prove no less colossal in scope. 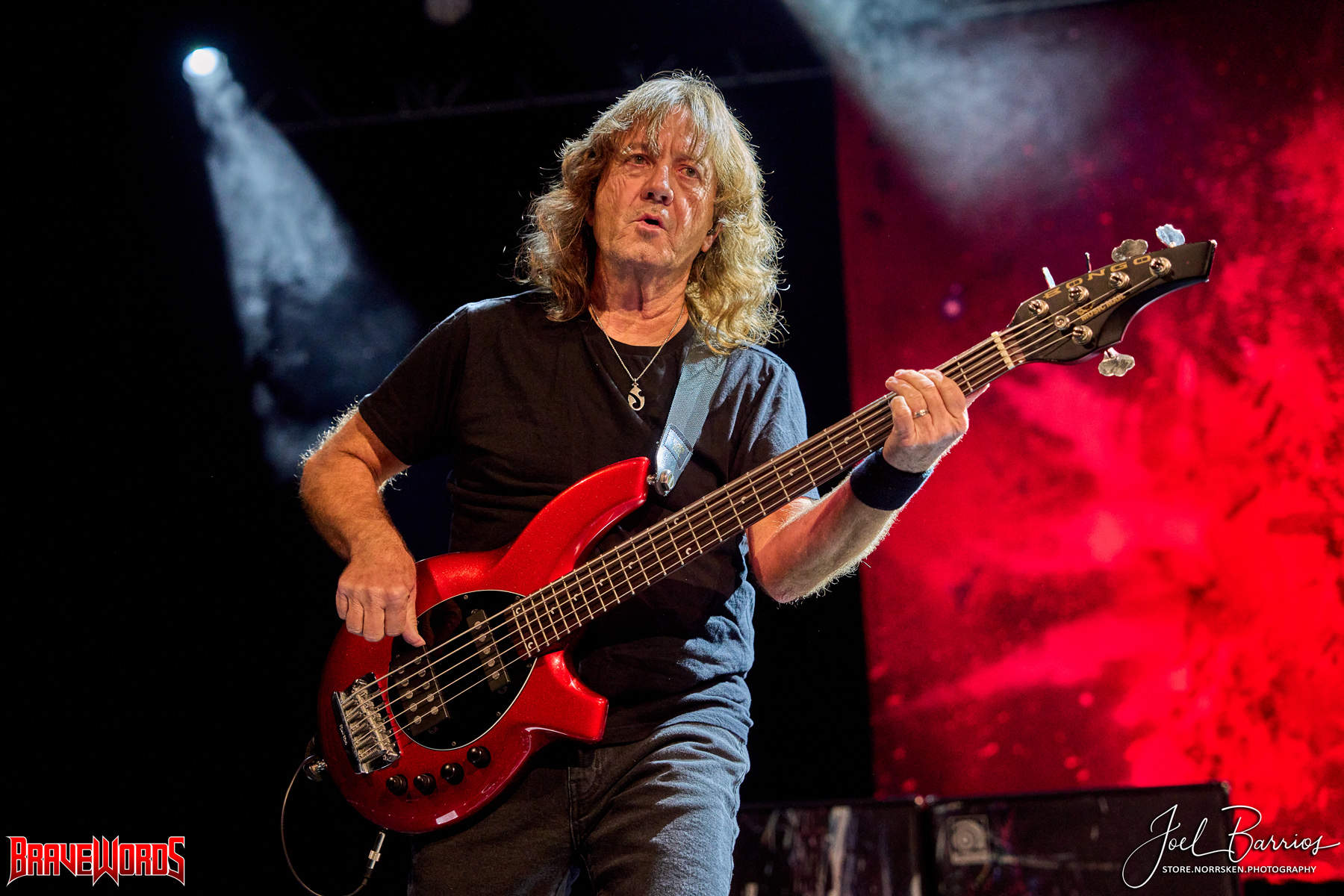