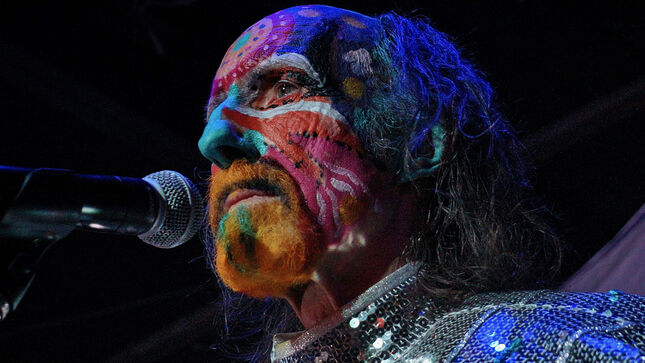 The one and only flaming helmeted "God of Hellfire", Arthur Brown, has signed a deal with Prophecy Productions and Magnetic Eye Records.

"Hi - this is Arthur Brown", the mystical maverick sends his greeting. "I am delighted to be signing with Prophecy and Magnetic Eye. I have chosen to work with these labels, because they believe in artist development and are therefore interested in the artist's vision of the direction of the music and overall aesthetic. They are adventurous companies. We have already started developing ideas of how we can work together. This feels like the beginning of a truly creative time in my lengthy career with companies who value both individuality and independent artistry. They are at the cutting edge of technology in the music industry and I am truly excited about getting my music out to a wide and varied music community."

Martin Koller comments: "It is with enormous pleasure that we are able to announce the signing of Arthur Brown in our 25th anniversary year, says the Prophecy Productions founder. "It is a once in a lifetime chance to sign the veritable God of Hellfire. It is a great honour and privilege to be able to work with such a legendary and visionary artist, who has in turn inspired so many giants of rock and metal over decades and has managed the rare feat of staying fresh, forward thinking, and relevant throughout his exceptional career. We take humble pleasure in contributing to Arthur Brown's next endeavour."

Jadd Shickler adds: "Arthur Brown is a legend", states the Magnetic Eye label director. "His music is all over the spectrum of psych and proto-prog across the past 50 years, but there's a reason he has performed to throngs of metalheads and stoner doom aficionados at fests like Psycho Las Vegas over the last decade: Arthur Brown is a riveting performer and an originator, who has exactly the kind of authenticity heavy rock fans dig. We're beyond honored to be taking part in presenting a brand new studio album from an icon like Arthur, and in helping him cement his legacy of more than a half-century making music in his inimitable style. Stoked!"

Hardly anybody who has anything to do with rock music will have never encountered that iconic #1 hit single "Fire" taken from the album The Crazy World Of Arthur Brown. Although released already in 1968, "Fire" went on to become a timeless classic that has not lost any of its mesmerising fascination throughout the years.

Its creator, the English rock singer Arthur Brown, is best known for his flamboyant theatrical performances, and his powerful, wide-ranging operatic voice. He has been a significant influence on a wide range of musicians due to his unique vocal style, wild stage persona, and outraging concepts. In the words of some of his peers:

"Now there's a man who was ahead of his time." - Elton John

"Arthur Brown is as much a dancer as he is a singer." - Pete Townshend (The Who)

Arthur Brown is widely recognized as a pioneer of shock rock, progressive rock, and an important influence of heavy metal. His groundbreaking work over several decades was honoured at the 2019 Prog Awards where Arthur Brown received the "Visionary Artist Award". During his extended career, Arthur Brown has acted as the lead singer of various groups, most notably the Crazy World Of Arthur Brown and Kingdom Come, followed by a range of solo projects and a cameo appearance in the cult film "Tommy", in which his dramatic vocals were backed by Eric Clapton and The Who. Collaborations include the first album of The Alan Parsons Project, Kula Shaker, Dave Gilmore, Die Krupps, Bruce Dickinson, The Stranglers, The Prodigy, and many more.

Arthur Brown's current work remains as authentic, challenging, creative, and compelling as it was in his fiery beginnings. His live performances include iconic classics, dance, poetry, visuals, and a subliminal soundtrack of new electronic music - and of course, he still brings the elegant flamboyant theatrical style onto the stages that he helped to establish as a gold standard.