BRUCE DICKINSON - "I Get Everybody Laughing About Cancer" 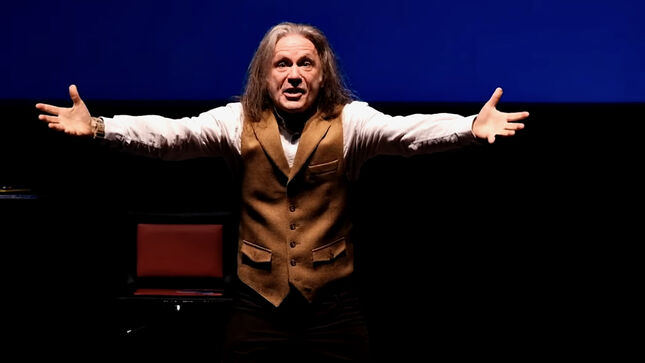 Bruce Dickinson launched the North American leg of his spoken word tour, An Evening With Bruce Dickinson, earlier this month in Florida. The 63-year old singer for Iron Maiden recently spoke to John Carucci of the Associated Press about standing on stage alone, telling his life story. An excerpt, courtesy of ABC News, follows:

You talk about some really personal stuff?

Dickinson: "I get everybody laughing about cancer. Because cancer is a big taboo. You know, about 50% of us are going to get it during our lifetime and we are scared witless of it. The very word sends us into a tailspin, as you know. And of course, I had my bout with throat cancer, as thousands of men do around the world every week. So that doesn’t make me special, but what I try and bring into it is my individual take on it. You know, “How do you deal with it?” Well, I don’t know how you deal with it, but here’s how I do deal with it."

How intense does that get?

Dickinson: "It can get quite literal and quite graphic in terms of some of the descriptions of some of the very, very embarrassing and ignominious things that you have to get up to when you’re under cancer treatment... So, yeah, you get people rolling around, hopefully about that and leaving with a positive statement."