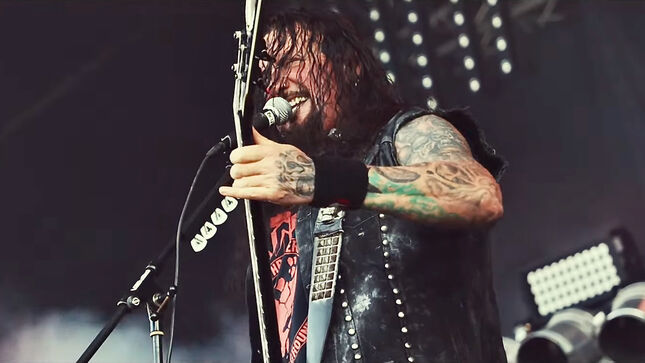 Speaking with Finland's Janne Vuorela, Destruction leader Schmier offers some news on the band's next album.

Asked if Destruction used the pandemic downtime to write new material, Schmier reveals: "For a long time, I wasn't ready. And last year, I didn't even try to think about a new album. But then the beginning of this year, I was kind of motivated. After the livestream, basically, I sat down and started writing new stuff. And then in February, we started for the first demos and everything. And we've been to the studio ever since now.

"At this moment right now, I'm gonna go to the studio tomorrow again to do the final mixes. So the new album will be done this summer, like, end of August the mixes are done, nd we will also release a new single very soon. But the album is coming the beginning of next year. Our label said right away, this year there's no more space for a new album, there's so many other bands coming this year. Everybody pushed back. But we will release some singles this year, so the fans will know a new album is coming soon. We have written a lot of great songs, I think, and the first one will be out in about two or three weeks, on the 19th of this month."

Schmier checked in via Facebook on July 30th with an update: "Yes, Corona goes weird ways. I have received several messages (asking) why we have played with a different guitarist in Austria at Area 53 Festival and I understand your concern. As much as I know, Mike (Sifringer is doing ok. Thanks for writing and asking! Well, he is not really answering my emails; communication is difficult at this point, so I'm not sure how he is doing. There was a problem that led to the decision to carry on without him for now and there will be a statement in August explaining the situation.

"I am in this weird situation to lead the band in difficult Covid times. We have been very productive and have already recorded the new album and are fully confident & ready for the festivals coming up. Please understand that this is a super difficult situation for me and we will release the statement when all things are sorted and clear (planned is August 19th for this). Nevertheless, Destruction will continue to Thrash till Death.

"Sorry about these uncomfortable news, it was not my decision. He decided to leave the band. Please stay tuned for the official statement ASAP!"

Fan flmed video of Destruction performing at Area 53 Festival 2021 in Leoben, Austria without Sifringer can be viewed below.