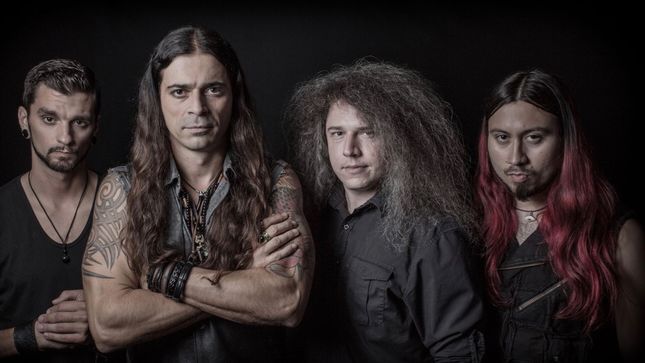 The lyrics of “Aeolian” describe the difficulties of being a struggling musician, something which Gabriel – who is currently filling in on guitar and keyboards for Powerglove during their ongoing summer tour – has recently experienced firsthand. Soon after the group arrived in Portland, Oregon last weekend, he was rushed to a local hospital, where he had emergency appendicitis surgery. Not wanting to leave Powerglove hanging, he returned to the stage the following night and hasn't missed a show since.

“Aeolian” – which is also now available for streaming on Apple Music, Spotify and other digital platforms – is featured prominently on Immortal Guardian's full-length debut, Age Of Revolution, which will be released via M-Theory Audio on September 28th. Fans who preorder digital copies of the album via Amazon, iTunes and Bandcamp will receive the song – as well as the previously released “Zephon” – as instant downloads. Physical copies of Age Of Reasoning are available for preorder via the M-Theory Audio webshop.

Immortal Guardian will support the album's release by hitting the road once again with recent tour mates Exmortus, with Hatchet also appearing on select dates. A complete list of the group's upcoming tour dates appears below, with more shows to be confirmed in the near future.

In support of their EPs, the group has made jaws drop on stages in not only their home state - where they've performed alongside some of the biggest names in metal, including Judas Priest, Dragonforce, Kamelot, Symphony X, Sonata Arctica, Slayer, Metal Church, Soilwork and Steve Vai - but also abroad in countries such as Brazil and Russia, and during high-profile performances at ESPN's X Games, South By Southwest and the Fun Fun Fun Fest.

In addition, Gabriel Guardian has developed an extensive following on YouTube, where his unique dual-instrument covers of classics by the likes of Iron Maiden, Pantera and Guns N' Roses have garnered hundreds of thousands of views. His virtuosity was also recently showcased on the MTV program Amazingness.