If RONNIE JAMES DIO Were Alive Would RITCHIE BLACKMORE Want To Reunite With Original RAINBOW Singer - “I Hate To Say It, But No” 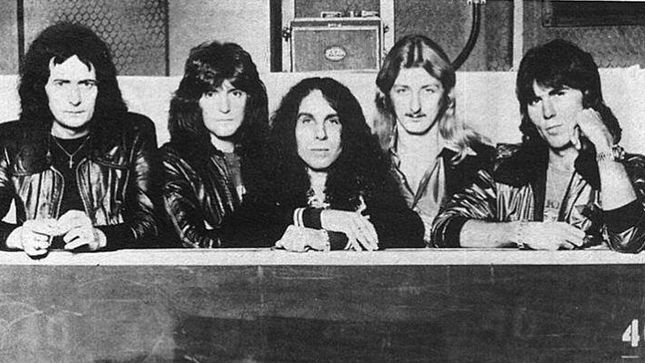 Legendary Deep Purple/Rainbow guitarist Ritchie Blackmore was interview by Newsweek recently about a number of topics. A few excerpts from the chat follow:

Newsweek: How did the regrouping of Rainbow in the mid-’90s come about?

Blackmore: “I kind of left the Purple camp and I was really at a loose end, I didn’t know what I wanted to do. I just knew that I didn’t want to travel anymore. They were all over the world, all the time, and I hate traveling. It’s funny, because I chose a profession where all you do is travel. I thought maybe I’ll re-form Rainbow and see how it goes. Popularity-wise, it went very well. But I wasn’t pleased with the lineup. After being in the studio, I thought, You know, I’m not happy with the singer (Doogie White). My main connection with music is the singer and if I don’t have a good singer, I can’t force it. And when you bring somebody into a band, sometimes the egos go crazy, so I thought, “Why am I doing this?” And Candy and I would often get around the fire because we were up in Massachusetts in a snow storm all the time, so we‘d often spend nights coming up with ideas. And I noticed that I was having a better time playing songs that Candy could sing rather than what the singer at the time in Rainbow was coming up with. So I decided to gravitate more toward the ballads and Medieval/Renaissance music, which of course has been my favorite music since 1972. So this was like two things in one: We’re having a good time and I’m playing basically Renaissance music, so I was very happy with that.”

Newsweek: When you reformed Rainbow for the shows last June, were you disappointed that you weren’t able to invite original singer Ronnie James Dio, who died in 2010?

Blackmore: “I hate to say it, but no, I wasn’t. I’d finished with Ronnie a long time ago, and we kept in touch now and again but I went on to other things and he was in other things. We kept it very convivial and that, but I think neither one of us really wanted to get back together. He’s a strong alpha male, and so am I; he wanted to go one way, I wanted to go the other.”

Newsweek: What are you thoughts about creating memorable solos?

Blackmore: “I’ve always thought what’s important is that when you extemporize your solo, it should be an extension of the actual song. I’ve never been one to be self-indulgent and run around the guitar and go “that’s my guitar solo” and it’s going impress some guitar players. I’ve always thought that was silly. And quite often, I’ll find that I’ve written a song, an idea, came up with a riff, and we’re finishing it up, and they’ll say, “oh, now put your solo on,” and that I’m now up in a corner. I don’t know really what to play then, so I’ll say let’s have a piano solo or something different because I don’t want it to just be playing for the sake of playing when it means nothing.”