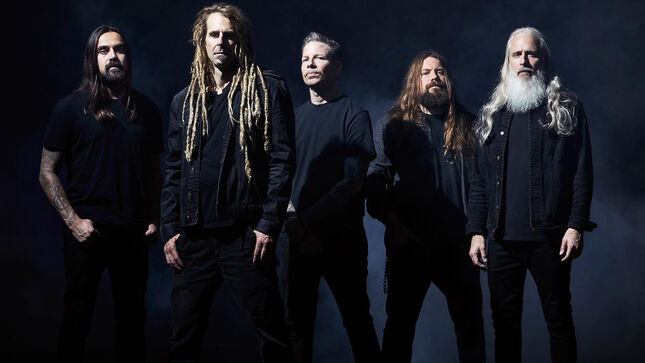 The Metal Tour Of The Year, featuring Megadeth and Lamb Of God, with special guests Trivium and In Flames, is in Fort Wayne, Indiana tonight, April 21st, at the Allen County War Memorial Coliseum. Sadly, Lamb Of God will not be taking the stage. The band has issued the following statement:

"Fort Wayne - we made our best efforts to put on a show tonight but unfortunately it is just not possible. [Chimaira vocalist] Mark Hunter went above and beyond to make the show happen for us Tuesday and unfortunately has fallen ill today (NOT Covid). We truly appreciate his efforts but it appears the universe has other plans for us. We are working hard to make the show happen tomorrow and will update our fans in Green Bay as soon as we can. Megadeth, Trivium and In Flames will play as scheduled tonight. Thank you for your patience and understanding."

On April 19th,  Lamb Of God released a statement that singer Randy Blythe had tested positive for COVID-19 and would miss the band’s concert that night in Grand Rapids, Michigan. Chimaira’s Mark Hunter filled-in as lead vocalist for Lamb Of God at the show.

The statement said, “While his symptoms have been mild and he’s on the mend, he will not be able to perform tonight at the Van Andel Arena. However, the show will go on! We are working to put together a special show with our brother Mark Hunter from Chimaira taking over the mic and a few friends helping out as well. We’ll see you tonight! We are hopeful he will be able to return later this week and will update as soon as we can.”

Mustaine lent his signature vocal to the track, with lead guitar work on the various solos by Lamb Of God’s own Mark Morton, as well as Megadeth’s Mustaine and Kiko Loureiro. The recording also includes vocal contributions from Megadeth members Kiko Loureiro, Dirk Verbeuren and James LoMenzo.

Listen here, and watch a video below.

Dave Mustaine - "We had a blast playing with Lamb of God on their cover of ‘Wake Up Dead’.  Almost as much fun as we’re going to have playing every night on Metal Tour Of The Year. I’m looking forward to seeing everyone!"

Randy Blythe - “The first leg of The Metal Tour of the Year back in 2021 was a total blast, and we’re about to take it on the road again. What better way to kick it off than a little inter-band jam session? All nine members of Megadeth and Lamb of God are on the thrash classic 'Wake Up Dead' - turn it up, and we’ll see you on the road!”

Mark Morton - "'Wake Up Dead' was a massively important song for me as an aspiring young guitar player. It was one of the first songs that began my lifelong love of thrash metal and helped reinforce for me that, while solos may be fun, my allegiance is to the RIFF! So you can imagine what a thrill it’s been for Lamb to cover this legendary song with Dave & the rest of the Megadeth guys. Truly an honor. We all had a lot of fun putting this together and I think you can hear that energy in the track. I hope everybody enjoys this one and we can’t wait to see y’all on The Metal Tour Of The Year."

Don’t miss Megadeth and Lamb of God on Leg 2 of The Metal Tour of the Year with special guests Trivium and In Flames beginning April 9 in Las Vegas, NV and wrapping May 19 in Quebec City, QC. Tickets and VIP packages available here.