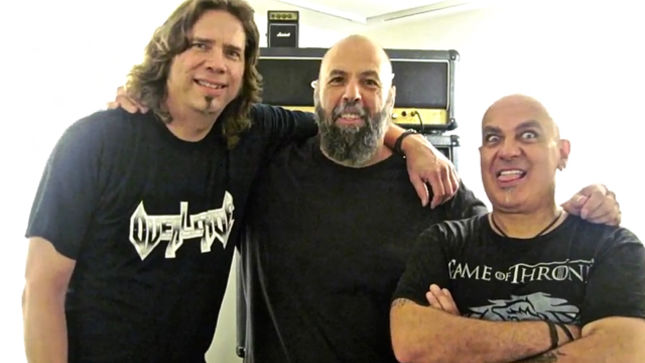 Overlorde went through an unexpected membership transition the past two years. After having more than half of a new album written and demo-recorded to various degrees, drummer David Wrenn and vocalist Bobby Lucas left during a 6-month period. The addition of George Janeira is the first step in the band getting back on track.

An old friend of Overlorde guitarist Mark "M.E." Edwards , George joined on drums in late summer 2014. He is officially introduced today via the video for Overlorde's new song "SevenOne8", an instrumental (listen below).

Currently residing in the Atlanta, Georgia area, George was born in Portugal. He got his first Ludwig drum set at the age of 12. After moving to New Jersey at 15, he played in several local bands. One of those bands was the metal cover band Starstruck in the early 80's. This is how George met M.E., as Mark was friends with the band.

Around 1990, George was a bandmate with Mark. George later moved away from the NJ and NY music scene to Georgia and recorded albums with the bands Travador and Die To Self. George reconnected with M.E. around 2010, which set the stage for George to join Overlorde when the drum throne became vacant.

Said Overlorde bassist John "Kong" Bunucci: "I really like how George's feet keep the beat, and how his approach fits seamlessly with my finger work and bass lines. His playing compliments my aggressive bass style. And since he comes from our same age group and influences, it's like playing with someone from the old neighborhood."

Mark "M.E." Edwards chimed in: "Having George on board is excellent. A great and talented guy from the old Jersey days whose drumming fits Overlorde perfectly. And you can't beat that infectious smile of his!"

And from George: "Kong and M.E. have such incredible gifts and skills with songwriting and playing. They have overwhelming authority on their instruments. It is such a pleasure to be part of Overlorde. I am fkn pumped!"

George has been rehearsing with Overlorde live, in real time, over the internet using JamLink. In July 2015, both he and Kong (who lives in South Carolina) converged in New Jersey at M.E.'s re-launched Das Bunker home studio. And while they were together, magic happened. Kong began playing a riff, everyone else joined in, and the basis for a new Overlorde song was born. Even better, M.E. had Cubase rolling, so he was able to capture the magic as it happened. The very first, off-the-cuff, jam on the song.

Later titled "SevenOne8" (a reference to the date, July 18th), the song was mixed by Rosario Panzarella. A video of the song serves to introduce both George and the song to the metal masses. Overlorde will expand upon “SevenOne8” and expects the instrumental to be on their next release.

Besides “SevonOne8”, a number of full song demos are close to completion. Which means....