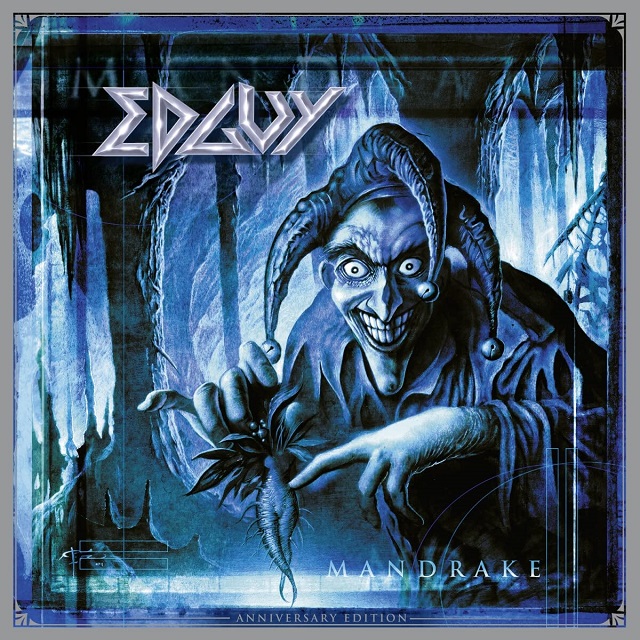 Scary to think Edguy’s Mandrake was released 21 years ago (September 24, 2001) and before their jump to Nuclear Blast, Mandrake marks the Germans’ last “pure” power metal album before the hard rock-isms made their way into 2004’s Hellfire Club. AFM Records has been releasing these Anniversary Editions of all the Edguy albums on digipak CD and vinyl with complete remastering (which Mandrake doesn’t need and the difference is minimal).

This Anniversary Edition marks the first vinyl reissue of Mandrake (presented on 2LPs in different colors) so naturally longtime fans may want to get their hands on these. There’s no essay on the album from mainman Tobias Sammet or a rock journalist in the linear notes – just lyrics, album credits, and pictures from the era. As for bonus material – there’s one extra track with “The Devil & The Savant”, which isn’t rare and has been readily available for years.

Musically, there’s a lot to love on Mandrake. Youthful exuberance, blazing, heavy guitars, big choruses, and fast, melodic solos rule the day. The lyrics are interesting and are fun to follow with themes of individuality, achieving your dreams, and fantastical, historical environments.  Opener “Tears Of A Mandrake” still raises goosebumps after all these years with the huge chorus and Sammet’s soaring vocals while the acoustic begun, but vicious and thrashy “Nailed To The Wheel” reigns as the heaviest track Edguy has ever released. Their quirky, Helloween like humor makes its way to “Save Us Now” – the lyric “highspeed alien drum bunny” drums up a silly smirk. Magnificent, mellow ballads like “Wash Away The Poison” fit in nicely, especially after the 10-minute epic “The Pharaoh”, a brilliant, Egyptian themed masterpiece with wondrous, mysterious vocals and mid-paced chugging, but meaningful guitars.

“Fallen Angels” is a by-the-numbers speedster and “Painting On The Wall” was the album’s first single, a steady, melodic mid-paced cut that’s solid, but nothing special. With that said, this is top shelf European power metal and shows a band rightfully continuing to explode in popularity. Newcomers to Edguy should check this out, but for longtime fans, it’s probably not necessary unless you find the vinyl version enticing.