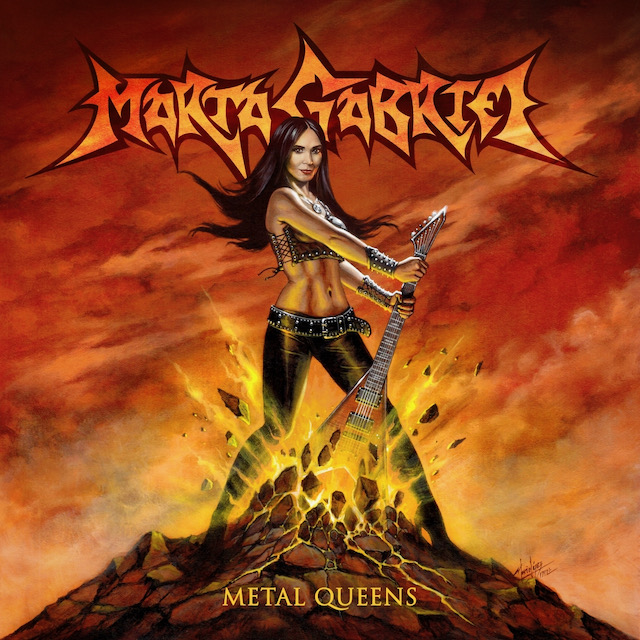 Best known as the guitar wielding frontwoman of traditional metallers Crystal Viper (although newly minted as bassist for pirate metal doppelgangers Blazon Stone), Marta takes a step outside of the band spotlight, to focus attention on the women in metal who came before her, on this eleven track solo outing. Some of the performers are well known, others will only be recognizable to the true (cvlt?) diehards. Regardless, it's what Gabriel does with the material that counts. Sure, in the nearly 40 years since some of these bands/songs were released, the role of females has expanded exponentially, and today there are tons of heavier/more vicious purveyors throughout the metallic sub-genres.

The Polish spark plug fields a veritable Keep It True, metal history book within the grooves and along the way, adds a couple renowned male voices (in duet). Tasty premise! Up first is the speedy "Max Overload" from Belgium's Acid (one of the first heavy bands with a female vocalist). Good, upbeat way to start the album, albeit nowhere near as gritty a voice as the vintage speed metal original. Next, the song that birthed this album's title and a subtext for lady's at the mic, ever since, Canuck darling, Lee Aaron's "Metal Queen": a stomping, mid-tempo call & response sing-along. Tepid, by today's standards, guess we were all hard (up?) for a long haired chick in armor, back in the Eighties.

Unfortunately, far fewer know of the two albums by New York's Blacklace, which mixed early Pat Benatar with fledgling, East Coast attempts at NWOBHM (Virgin Steele/Manowar). Here, their rapid "Call Of The Wild" includes high pitched Todd Michael Hall (Riot V) to the mix. Leather Leone fronted Chastain during the namesake guitarist's best platters, so sort of a surprise that Marta selected "Light In The Dark" (off 1990's For Those Who Dare), a rather late entry in the Chastain canon. In fact, it marks her final output with the original incarnation of the Cincinnati-based outfit, having already opted for a solo effort, the year before. Jag Panzer/3 Tremors screamer Harry "The Tyrant" Conklin climbs aboard this slow to boil, mid-paced number.

Returning to European inspiration, comes Zed Yago. One of several Noise Records signings that couldn't gain traction in the US market (even with an NYC office), singer Jutta Weinhold has played a 30 year second act, rechristening the band Velvet Viper (in '91) and just issued a new album. Slight commercial streak in "Rebel Ladies", which was probably chosen as much for the title/thematic concept than anything else. Bouncy, tambourine enhanced "My Angel" enlivens things once more. A fellow UK presence accompanies the Rock Goddess contribution, none other than John (Raven) Gallagher, although he only plays bass, keeping his usual zany repertoire of vocal effects under wraps.

The final third of the disc features some of the most infamous, as well as unsung/unknown artists, beginning with "Count Your Blessings" (for which there is a promo video), courtesy of Malteze. The shouted, title chorus is from the LA-based act's one and only full-length, having more in common with burgeoning Euro sounds. Issued in 1990, with more balls than most on the Sunset Strip, but Hell, the "boys" looked prettier than the women (at that point), so certainly the musical/visual disconnect got lost in the shuffle.

If there's a musical bio pic that needs to be made, Wendy O William (ex-Plasmatics) should be at the top of the list: outrageous, uncompromising and surely misunderstood, she endured a lot in her short time on the planet. "Going Wild" might as well be her theme songs, a mix of cheap sexuality and infectious groove. Sticking with the West Coast, the proper album closer is Hellion's "Bad Attitude". The band was managed by another strong woman, Wendy Dio, but even her magic fingers couldn't turn them into gold. Ann Boleyn is better known for starting New Renaissance Records, which not only housed the Hellion catalog, but many late 80s speed/thrash metallers. The Spanish language "Reencarnacion", plucked from Santa's debut (no, not the overweight, red-fur, present-bearing elf) is the lone band, on this compilation, from which I've never owned anything. Truthfully, it's one of the faster cuts herein. Rounding off the running order (albeit a CD-only bonus) is Warlock. No "metal queen" offering could be complete without Doro Pesch, who has embodied the terms for the last 35+ years. Rather than opt for a known chestnut (and be compared to a decades' old performance: a no-win for Gabriel) she chose the relative obscurity of "Mr. Gold". OK, as the lead-off to True As Steel, it's not a "rarity," but certainly not a concert staple either. Much like it started, the collection ends with a (head) bang and skyward thrusting fist.