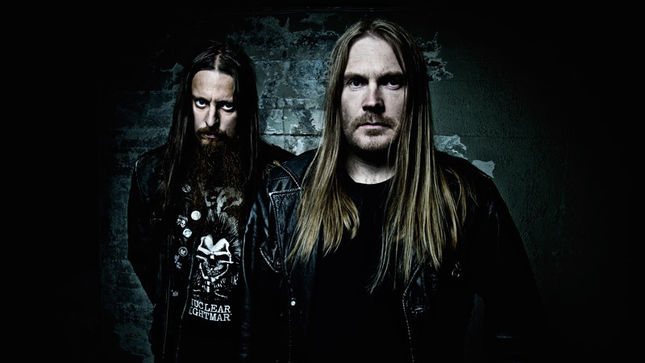 Fenriz explains he band's vision in 2016: "An eclectic mix of free-spirited '80s fueled blackened heavy metal, all executed in Darkthrone's trademark raw and organic style, Arctic Thunder was recorded and produced by the band themselves, with the sessions conducted at Darkthrone's old rehearsal unit, The Bomb Shelter, which was originally used during 1988-1990. Mastering is once again handled by Jack Control at Enormous Door."

Looking back through the nearly thirty-year catalog of recorded history by those within Nordic black metal, it's clear that it doesn't get more bare bones and humble than Darkthrone. That said, their last release, 2013's The Underground Resistance, is the exception to this rule. Prior to this stylistic shift, the band released a string of punk-infused albums that really started to take hold on 2006's The Cult Is Alive. Standing alone as a balls-to-the-wall, anthem-filled ode to all that is old-school metal, The Underground Resistance was certainly a welcome change for those that wanted a bit more steel in their Darkthrone. There is a decidedly more upbeat tone that pervades the entirety of the album, which, to these ears, felt a little out of place. Perhaps it's the Norwegian Black Metal elitist in me that never quite understood what Fenriz and his partner in grime, Nocturno Culto, were trying to lay down. Nevertheless, it's a solid album that showcased the diversity and integrity of its creators.

Three years on, I sit here today barely able to contain my excitement as I spin - for the umpteenth time - Darkthrone's lastest work, Arctic Thunder. It's immediately apparent that this thing is a return to the tundra, so to speak. An even simpler way to describe it is that it sounds exactly like the images that the title alone - Arctic Thunder - conjures in the occipital lobe of your blackened brain. Not much else to say, really. But, in the spirit of a review proper, let's dig a little deeper into the darkened permafrost.

The album starts with what I consider to be the two best opening tracks on a Darkthrone album since '95's Panzerfaust. If you recall, that album opened with the incredible duo of "En Vind Av Sorg" and the "Triumphant Gleam" - both the former and latter lulling the listener into a hazy, snowblind, blizzard-induced hypnosis. Arctic Thunder, in much the same way, opens with the aptly-titled "Tundra Leech" and "Burial Bliss", with the latter of this mesmeric twosome being the album's highlight - and it's most 'trve/cvlt' moment.