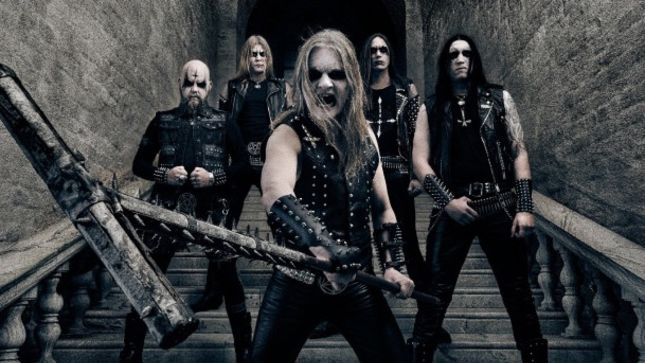 2020 saw Necrophobic again raise the fires of damnation with their new opus. The Swedish death/black masters infuse more life to their hellish sounds with thrashy riffs while adding unexpected melodies to heighten the senses. Fusing these sounds seamlessly have propelled them to the upper echelon of heavy metal and with the ghastly growls of Anders Strokirk to navigate the atmosphere, Dawn Of The Damned stands as one of the best of the year and hits #6 on our countdown.

An excerpt of a BraveWords feature:

BraveWords: With Dawn of the Damned following up one of the groups more acclaimed records ever in Mark Of The Necrogram, was there a pressure as the primary songwriter to keep that momentum going, or even top it?

Sebastian Ramstedt: “I just kept on writing after Mark Of The Necrogram. The success of the album came gradually during those two years on the road. So when I had written most of the material, I didn’t know about the success yet. But now when I know this it would have been horrible to start the writing sessions now, you know? And to do a third album now, that would be pretty hard, actually. You have to do what you want to do, you can’t think of what you should do. But actually when writing Dawn Of The Damned I felt totally free. There was no pressure at all. I felt confident and just kept doing what I do.”

Sebastian Ramstedt: “Back then in the ‘80s it was Iron Maiden, Judas Priest, Saxon. Probably Saxon more than any other band. Image-wise, it was Mötley Crüe and W.A.S.P. That combined, the hard music from Europe and this spectacular bloody image of the states, those two together were just fantastic. And that is still what I’m trying to do.

“I want us to be like W.A.S.P, but more satanic. And I want us to be like Iron Maiden, but heavier, you know? I must have new influences all the time, new input on things. So recently I’ve been listening a lot to the glam rock guitar players of the ‘80s, which I hated back in the ‘80s. I hated when you watched MTV and there was a Cinderella song or something and you had to sit through that to get a Sepultura song. But recently over like five, six years ago, I started to think of looking into why is everybody speaking about those guitar players? There must be something to it. And I realized that I have missed a lot of great techniques and themes and stuff by judging those bands as poser bands. So now I happily dig into the Dokken back catalogue just to pick out the goodies that I can get inspired to do black metal off. I don’t do Dokken pastiche, but I can take what I hear and I can create new kinds of riffs because of it.”